The Gallantry Awards were presented by President Ram Nath Kovind on Monday at the Defence Investiture Ceremony-I at Rashtrapati Bhavan. 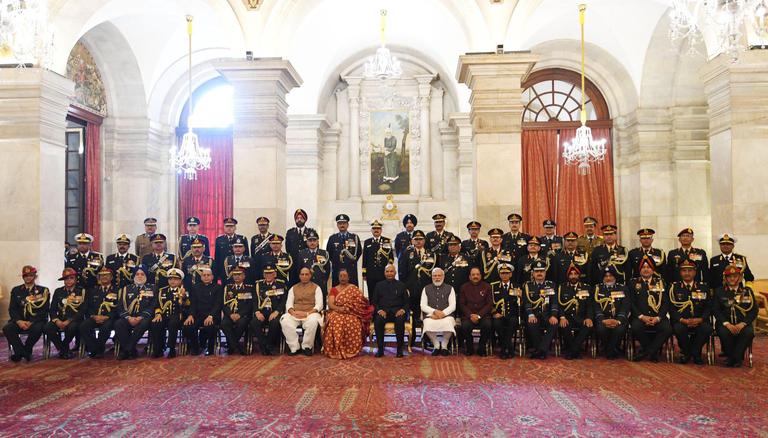 
Prime Minister Narendra Modi on Monday congratulated the recipients of the Gallantry Awards saying that their 'dedication and courage' was a motivation to the citizens. Taking to Twitter, PM Modi shared images of the two Defence Investiture Ceremonies at Rashtrapati Bhavan where he, along with President Ram Nath Kovind, Defence Minister Rajnath Singh and the Gallantry Awards recipients pose for an official photograph.

Attended the two Defence Investiture Ceremonies at Rashtrapati Bhavan. Proud of all those who have been conferred the Gallantry Awards. Their courage and dedication will keep motivating our citizens. pic.twitter.com/c62ktf0Xuo

The Gallantry Awards were presented by President Ram Nath Kovind on Monday at the Defence Investiture Ceremony-I at Rashtrapati Bhavan. During the ceremony, the President accorded several medals of honour like the Shaurya Chakra, Kirti Chakra and the Vir Chakra.

The Vir Chakra was conferred to Balakot Airstrike hero Indian Air Force Wing Commander (now Group Captain) Abhinandan Varthaman who is infamous for his showdown with a Pakistani fighter jet, following the Pulwama attack. During his valiant face-off, Abhinandan had brought down a Pakistani F-16 fighter jet. After his brief custody with the Pakistan Army, he returned to India from the Wagah border on March 1, 2019.

READ | What has changed a year after Galwan gallantry?

Apart from Abhinandan Varthaman, President Kovind accorded the Shaurya Chakra (posthumously) to Naib Subedar Sombir for killing an A++ category terrorist during an operation in Jammu & Kashmir. The award was received by Naib Subedar Sombir's wife and mother.

In addition, Major Vibhuti Shankar Dhoundiyal was also accorded the Shaurya Chakra (posthumously) for his role in an operation that neutralised five terrorists and led to the recovery of 200 kg of explosive material. He was martyred in the February 2019 encounter with Jaish-e-Mohammed (JeM) terrorists in Pulwama. The award was received by Major Dhoundiyal’s wife Lieutenant Nitika Kaul and mother Saroj Dhoundiyal.

The President also conferred the Shaurya Chakra to Major Maheshkumar Bhure who is an alumnus of Sainik School Satara. According to the citation, Major Bhure led an operation in which six top terrorist commanders were killed.

Further, President Ram Nath Kovind accorded the second-highest peacetime gallantry award Kirti Chakra (posthumously) to Sapper Prakash Jadhav from the Corps of Engineers who had been instrumental in neutralising terrorists in an operation in Jammu & Kashmir.