The NMCG under the guidance of PM Narendra Modi led government is working to ensure that a wide network of sewage plants is set up to control dirty water flow. 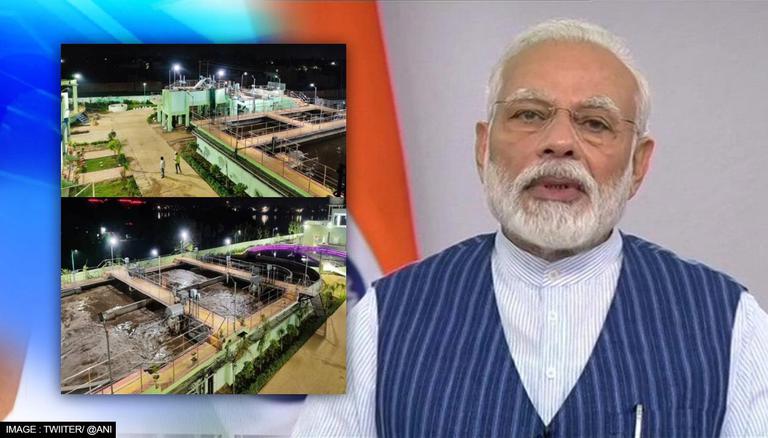 
During Prime Minister Narendra Modi's visit to Uttar Pradesh on Monday, October 25, he partook in the inauguration of a new state-of-the-art sewage treatment plant in Ramnagar, Varanasi. This one of a kind sewage plant uses the latest A20 (Anaerobic-Anoxic-Anoxic) technology for systemised sewage treatment.

This plant is set up under the flagship program of the National Mission for Clean Ganga (NMCG), chaired by the Union Government.

The NMCG under the due guidance of PM Narendra Modi led government is working to ensure that a wide network of sewage plants is set up to control the flow of dirty water in the river Ganga. This would ensure that the cleanliness and persistence of the holy water be maintained. This particular sewage plant set up in Varanasi holds a capacity of 10 megaliters per day (MLD) and uses the latest A-20 technology to help treat sewage and further mitigate similar concerns. This will ensure that polluted water is handled with the most modern and advanced equipment from different countries and only treated water flow be assured in the Ganga river.

The foundation stone of this sewage plant was laid by the PM back on November 12, 2018, with a total cost estimated at Rs 72.91 crore This purified water will be released into the Ganga through the main pumping station. Some other equipment, including the main pumping station, has been imported from abroad so that the contaminated water can be treated in advanced ways.

Set up back in October 2016, the NMCG which holds its spot as the implementation wing of the National Ganga Council is set up under the River Ganga (Rejuvenation, Protection and Management) Authorities order. This order went on to dilute the National Ganga River Basin Authority. Its aim is to clean the river Ganga and its tributaries in a comprehensive manner. National Mission for Clean Ganga (NMCG) ensures that a wide network of sewage treatment plants is setup to stop the flow of dirty water into Ganga, so as to ensure the 'nirmalta' (cleanliness) & 'aviralta' (e-flow) of the river. With the inauguration of this STP plant, there will be a complete stoppage on the contaminated water falling into the Ganga from a total of five drains of Varanasi, Uttar Pradesh.