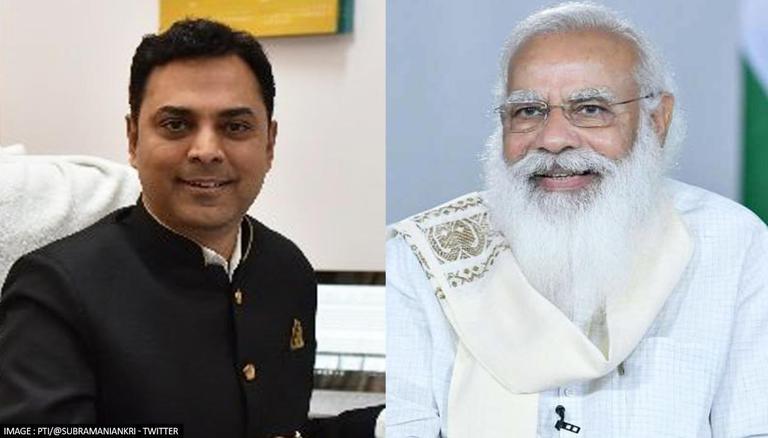 
Prime Minister Narendra Modi praised the 'academic brilliance and reformist zeal' of KV Subramanian who stepped down as India's Chief Economic Advisor on Friday, following the completion of his three-year tenure. Wishing him the very best for his future endeavours, PM Modi said he was delighted to have collaborated with Subramanian.

"It's been a delight to work with KV Subramanian. His academic brilliance, unique perspectives on key economic as well as policy matters, and reformist zeal are noteworthy. Wishing him the very best for his coming endeavours," said the Prime Minister, responding to the economist's tweet.

Its been a delight to work with @SubramanianKri. His academic brilliance, unique perspectives on key economic as well as policy matters and reformist zeal are noteworthy. Wishing him the very best for his coming endeavours. https://t.co/jZjrqWaJU7

Earlier on Friday, October 8, the Chief Economic Advisor announced his resignation and return to academia, three years after taking charge of the top post. In a statement released on Twitter, Subramanian said serving the nation has been an absolute privilege for him while lauding the 'wonderful support and encouragement' that he received from the government.

Subramanian had taken charge as the 17th CEA of India on December 7, 2018, nearly five months after his predecessor Arvind Subramanian stepped down from the post. The 50-year-old economist thanked PM Modi and Finance Minister Nirmala Sitharaman for the opportunity provided to him.

Speaking about his tenure as the CEA, KV Subramanian said: "I have received tremendous encouragement and support from within the Government and have been fortunate to enjoy a warm relationship with senior functionaries. In close to three decades of my professional life, I am yet to encounter a more inspiring leader than the Hon’ble Prime Minister, Shri. Narendra Modiji. His intuitive understanding of economic policy combines with an unmistakable determination to use the same to elevate the lives of common citizens."

During his career, Subramanian has also been a part of the expert committees for the Securities and Exchange Board of India (SEBI) and the Reserve Bank of India (RBI). He is well-versed with the private sector with brief stints in top corporates including JPMorgan Chase, ICICI Bank, and Tata Consultancy Services.

The government is yet to announce Subramanian's successor.