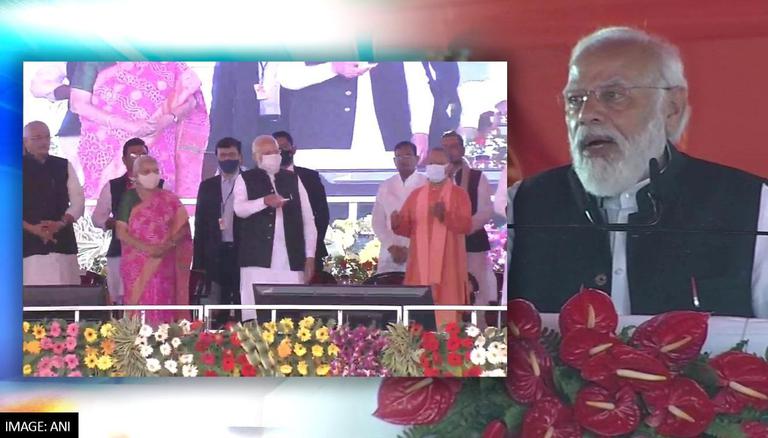 
On his visit to poll-bound Uttar Pradesh, Prime Minister Narendra Modi on Friday inaugurated multiple irrigation projects in Mahoba. The projects inaugurated include Arjun Sahayak Project, the Ratauli Weir Project, the Bhaoni Dam Project, and the Majhgaon-Chilli Sprinkler Project. Once fully operational, these projects of a cumulative worth of Rs 3,350 crore will help irrigate around 65,000 hectares of land in the districts of Mahoba, Hamirpur, Banda, and Lalitpur, benefitting lakhs of farmers in Uttar Pradesh.

In the event in Mahoba that also had in attendance Uttar Pradesh Chief Minister Yogi Adityanath and Governor Anandibai Patel, Prime Minister Narendra Modi while launching the schemes said, “Mahoba is a witness to how we have brought the government from the closed-door rooms of Delhi to every nook and corner of the country in the past seven years.” PM Modi added, "In the past seven years, we have laid the foundation of such scheme- from land to seeds- that have brought considerable change in the lives of the sisters and daughters of the country."

'Previous govt didn't get tired of looting you, we're not getting tired of working for you'

"How in the past few years did this area become a centre of problems related to water shortage?" PM Modi asked while addressing the crowd in Mahoba, adding that people stopped marrying their daughters in the region while the daughters of the region started dreaming of getting married somewhere else. Underlining that the people of the region know the answer to the question better than he does, PM Modi added, "Because the previous government looted you, and benefitted their families. Your family kept longing for drops of water, but they did not care." PM Modi said that for decades the people of the region have seen a 'government that loots', but for the first time they are seeing the 'government that works'.

"They did not get tired of looting the people, and we are not getting tired of working for the people," he said.

Later in the day, Prime Minister is scheduled to visit Jhansi for the "Rashtra Raksha Samparpan Parv".