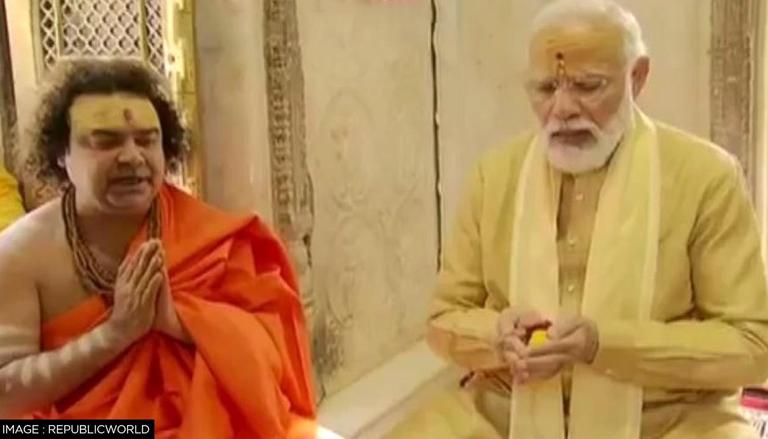 
Prime Minister Narendra Modi, who is currently on his two-day trip to his parliamentary constituency Varanasi, offered prayers to Lord Shiva at Kashi Vishwanath Temple on Monday. PM Modi, who started his day by visiting the Kal Bhairav Mandir for the 'darshan' of the deity, later travelled by river route to reach the Lalita Ghat adjoining the corridor. PM Modi made his way to the Kashi Vishwanath Temple to offer his prayers here.

About the Kashi Vishwanath temple

Kashi, also known as Banaras or Varanasi, is the cradle of spirituality and India's spiritual capital. It is situated on the western banks of the river Ganga in Uttar Pradesh. The Kashi shrine, with a Jyotirlinga (Lord Shiva) as the presiding deity, stands out among the numerous ancient temples and monuments with significant spiritual significance.

Lord Shiva, who appeared as a blazing pillar to demonstrate his power, split the earth's surface and flashed up into the sky. Jyotirlingams appeared in twelve different places, as a component of this dynamic light. One of these is Kashi. Lord Shiva is referred to as Vishwanath, or Lord of the Universe, and Vishveshvara (Vishwa+Ishwara), or God of the Universe. The infinite nature and power of Lord Shiva are symbolised by this limitless ray of light. Thousands of people come to visit the Ganga aarti at the nearby Dashahwamedha Ghat, in addition to the beautiful ancient temple.

The Kashi Vishwanath shrine symbolises India's spiritual and cultural traditions, making it the most prominent in the country. And, with the inauguration of the Kashi Vishwanath Corridor, which includes several historic structures, the temple's importance is set to skyrocket. PM Modi laid the groundwork for the Kashi Vishwanath Dham project on March 8, 2019. The project was designed to make it easier for the differently-abled and the elderly to go around, with ramps, escalators, and other modern amenities being installed.