PM Modi on Tuesday took to Twitter and announced that the Kushinagar International Airport in Uttar Pradesh is all set to be inaugurated on Wednesday. 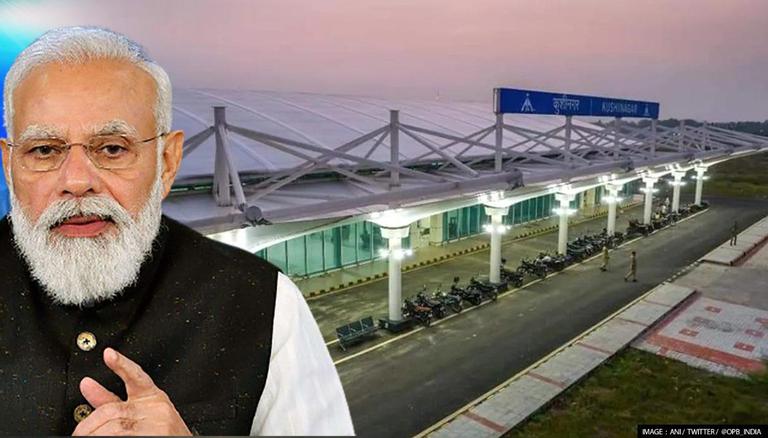 
In a major development, Prime Minister Narendra Modi on Tuesday took to Twitter and announced that the Kushinagar International Airport in Uttar Pradesh is all set to be inaugurated for facilitating the requirements of international Buddhist pilgrims in the country.

The inauguration, which will be done by PM Modi on Wednesday, will mark the presence of many other important leaders including Chief Minister Yogi Adityanath, Civil Aviation Minister Jyotiraditya Scindia, Governor Anandiben Patel, and others.

Tomorrow, 20th October, I would be in the sacred land of Kushinagar to inaugurate various development works that further ‘Ease of Living’ and mark the special Abhidhamma Day. https://t.co/O8xKrixjco

Tomorrow is a special day for our infrastructure and civil aviation sector. The Kushinagar International Airport will be inaugurated, with the inaugural flight landing from Colombo, whose passengers include a group of respected monks. This airport will benefit UP and Bihar. pic.twitter.com/ZPraanod1o

"It is our constant endeavour to boost medical related infrastructure across the nation. In Kushinagar tomorrow, 9 medical colleges will be either dedicated to the nation or their foundation stones would be laid," PM Modi added in a following tweet.

The airport, which aims to increase the tourist influx in the state, spans over 3,600 sqm and has been built at a cost of Rs 260 crores. The airport will serve nearby districts of Uttar Pradesh and Bihar, and is an important step in boosting the investment and employment opportunities in the region.

By enhancing the development of a Buddhist theme based circuit, the airport will cut short the journey in Lumbini, Bodhgaya, Sarnath, Kushinagar, Shravasti, Rajgir, Sankisa and Vaishali circuit. Direct air routes with South Asian countries will make it easier for tourists coming from Sri Lanka, Japa, Taiwan, South Korea, China, Thailand, Vietnam and Singapore etc., to reach the rich heritage.

The airport will give a boost to the economic development of the state and the region by throwing a multiplier effect on the hotel industry, tourism agencies, local industry and products, eateries etc.

PM Modi, who will be visiting Uttar Pradesh on October 20, will start his day by inaugurating the Kushinagar International Airport, following which he will be addressing a program at the Buddhist site in Mahaparinirvana stupa and temple.

He will be also visiting the exhibition of Paintings of Ajanta frescos, Buddhist Sutra Calligraphy, and Buddhist artefacts. After that, he will lay the foundation stone of Rajkiya Medical College followed by the foundation stone of 12 other development projects worth Rs 180 crore. Meanwhile, on the occasion of Abhidhamma Day, the tourism department will be also organising a tourism promotional event at Kushinagar.