PM Modi wrote on Twitter: “After serving the PMO assiduously and diligently for over five years and making an indelible contribution to India’s growth trajectory, Shri Nripendra Misra Ji will be embarking on a new phase of his life. My best wishes to him for his future endeavors. Shri Nripendra Misra is among the most outstanding officers, who have a great grasp of public policy and administration. When I was new to Delhi in 2014, he taught me a lot and his guidance remains extremely valuable.”

Further, the Prime Minister has also appointed outgoing Cabinet Secretary P.K. Sinha, UP batch cadre IAS officer, 1977, as Officer on Special Duty (OSD) in the Prime Minister's Office (PMO). Also, Rajiv Gauba, a 1982 batch Jharkhand cadre officer was appointed by the government as the next cabinet secretary. Gauba, was home secretary before that, took charge in his new capacity on Friday. 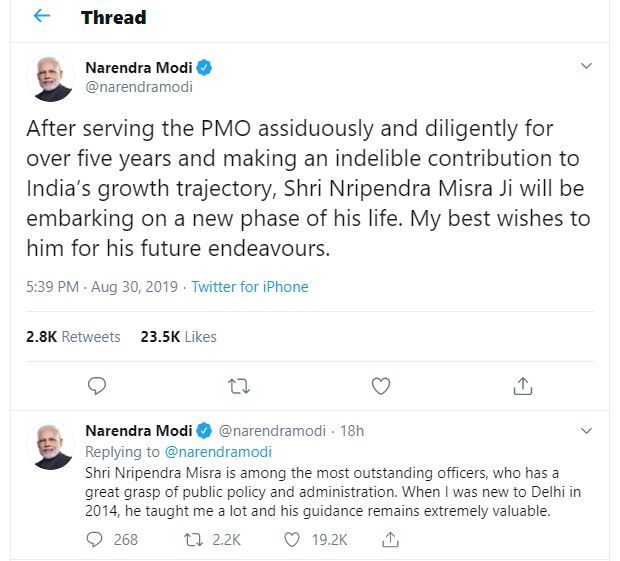 In a series of tweets, Prime Minister Narendra Modi described his outgoing Principal Secretary Nripendra Misra as "among the most outstanding officers who have a great grasp of public policy and administration" and said Misra taught him a lot when he was new to Delhi in 2014 and his "guidance remains extremely valuable". PM Modi also mentioned that Misra had requested to be relieved after the 2019 Lok Sabha elections but after winning the elections he requested Misra to continue till an alternative arrangement had been made. Praising Misra, Prime Minister said, "In 2014, when I took over as Prime Minister, Delhi was new to me and Nripendra Mishra was also new. But he was well informed and familiar with the governance of Delhi. In that situation, he gave his valuable services as Principal Secretary,"

PM Modi also spoke of Nripendra Misra's role in government's policies and programs winning the trust of people. He said Misra always gave him support as a colleague. "At that time, he not only helped me personally but also played an important role in taking the country forward for 5 years and winning the trust of the people. As a colleague, he always supported me," PM said. He further added that he has accepted Misra's request to relieve him from duties and Misra will be relieved from the second week of September according to his wish. He also wished him luck for his future endeavors.

Nripendra Misra, an Uttar Pradesh cadre 1967 batch IAS officer and widely experienced bureaucrat who previously served as Secretary in the Telecom department as well as Secretary, Fertilizers, and also as chairperson of the Telecom Regulatory Authority of India (TRAI), thanked the Prime Minister for the opportunity to work in the PMO and placing complete faith in him.

In a statement, Shri Nripendra Misra said, “It has been a privilege to serve the country under Hon’ble Prime Minister Shri Narendra Modi Ji. I am deeply grateful to him for this opportunity and the complete confidence he has placed in me. I have enjoyed working committing my every hour and thought for more than five years, towards this satisfying journey.  It is now time for me to move on, even as I remain devoted to public causes and national interests.  I thank all colleagues, within and outside the Government, friends and my family for this support.  I wish Shri Narendra Modi Ji, our Prime Minister, success as he leads our country into a bright future.”

Few new appointments were also made in the PMO on Friday including a joint secretary, three deputy secretaries, and a director. Arvind Shrivastava, joint secretary in the Department of Economic Affairs in the Finance Ministry, has been moved to the PMO as joint secretary. Saurabh Shukla, former private secretary to the late finance minister Arun Jaitley, has been appointed a director in the PMO. Gujarat-cadre IAS officer Hardik Shah, currently Private Secretary to the Union Environment Minister; two Indian Foreign Service officers, Abhishek Shukla of the 2006 batch and Pratik Mathur of the 2007 batch have also been appointed deputy secretaries in the PMO.