"I hit a roadblock when I tested positive for COVID-19 and had to return to Jaipur. I was feeling fatigued but I had no other symptoms," IIT Delhi alumnus said. 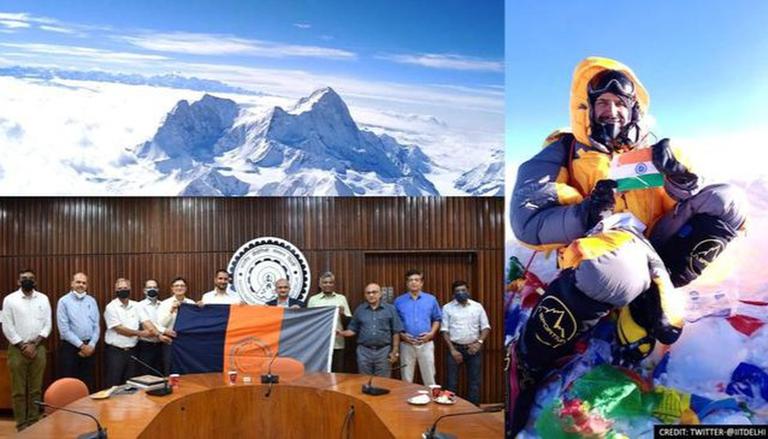 
Despite testing COVID-positive while he was on the verge to start his long-awaited Mt. Everest summit, an IIT Delhi alumni Neeraj Chaudhary defeated the virus and scaled the lofty peak, achieving the tough feat post-recovery. As he returned to the Everest Base camp after a 36-hour expedition and hoisted the tricolor alongside the IIT Delhi's flag, he was met with celebration and cheers. The 37-year-old pursued M.Tech in Environmental Sciences and Management at Indian Institute of Technology (IIT), Delhi from 2009 to 2011 and is currently employed with the Rajasthan government's Water Resources Department.

He had also carried IIT Delhi's flag with him, which he hoisted on Everest Base Camp and the logo till top. pic.twitter.com/2101lKi7N1

He started the summit push directly from Camp-II (6400m AMSL) on 30th May and after the summit on 31st, returned directly to Camp-II in a continuous effort of almost 36 Hrs. He participated as a member of IMF Everest Massif Expedition 2021 under the aegis of MoYA&S. pic.twitter.com/dQHnXf8lo0

The avid mountain climber is also a member of the Indian Mountaineering Foundation (IMF) Everest Expedition under the Ministry of Youth Affairs and Sports. He served as an inspiration to colleagues and friends for passionately pursuing his dream post a lengthy battle with the COVID-19. His plans also briefly seemed unachievable as the expedition was postponed due to the COVID-19 variant surge.

As India battled the tough wave of the delta variant of the coronavirus with mounting death toll and significant spike in the infections, Chaudhary's family members in Rajasthan were anxious about updates on his well-being back in his hometown of Rajasthan. Despite uncertainties, the former did not give up on hope. Chaudhary joined mountaineering back in 2014 and was motivated on achieving his goal. Battling the challenges posed by the coronavirus outbreak, he reached Kathmandu with his team.

"But I hit a roadblock when I tested positive for COVID-19 and had to return to Jaipur. I was feeling fatigued since a few days but I had no other symptoms," Chaudhury told PTI. "In that moment as well, I wasn't really thinking of COVID-19. All I could think of was how much effort I had put in and the preparations I had done to reach there and that was my chance to complete it. I think that motivation of not having a second chance anytime soon helped me push my body harder and there I was," he added.

"It wasn't easy mentally, and mountaineering is not just a physical effort. When I reached there, then also it took me three attempts within 36 hours to ultimately reach the top but once there, it was the best feeling. I managed to scale the peak on May 31," IIT Delhi alumni Neeraj Chaudhary, said describing his experience. He further thanked his institution IIT for a fundraiser of Rs 24 lakh to make the expedition possible.

#ProudMoment
A Flag in Ceremony held today to mark the achievement of #IITDelhi alumnus Mr Neeraj Choudhary (M. Tech), who successfully scaled #MountEverest summit (8848.86m AMSL) on May 31, 2021 at 06:00AM IST. pic.twitter.com/62VtEQmm2B

On July 10, a flag ceremony was held at IIT Delhi to commemorate Chaudhary’s achievement. "It's a matter of great pride that an alumnus of IIT Delhi Neeraj Choudhary, MTech, (Shivalik hostel) successfully scaled Mt Everest summit (8848.86m AMSL) on May 31. Neeraj carried the IIT Delhi flag with him and hoisted it on Mount Everest,” IIT Delhi stated. Meanwhile, IIT Delhi Director V Ramgopal Rao said, “He [Chaudhary] started the summit push directly from Camp-II (6400m AMSL) on May 30 and after the summit on 31st, returned directly to Camp-II in a continuous effort of almost 36 hours.”