As the session of Rajya Sabha is on, Syed Nasir Hussain, Congress MP from Rajya Sabha in the question hour asked if Pulwama terror attack in which 40 BSF jawans were martyred is a result of intelligence failure.

As the session of Rajya Sabha is on, Syed Nasir Hussain, Congress MP from Rajya Sabha in the question hour asked if Pulwama terror attack in which 40 jawans were martyred is a result of intelligence failure. Marked as the unstarred question, Hussain asked the ministry of home affairs if the intelleigence failure was one of the reasons for the attack. He also asked that if it was not intelligence failure then how the bomber car joined the highway from a slip road even as it contained 300 kg of explosives.

Answering to the questions, G Kishan Reddy, the MoS ministry of home affairs categorically said that intelligence failure was not the case.

Elucidating his answer, he said on behalf of the Home ministry:

"Jammu and Kashmir are affected by terrorism sponsored and supported from across the border for the last three decades. However, owing to the policy of zero tolerance towards terrorism and sustained action against the terrorists have been neutralised during the past few years. All agencies are working in a coordinated manner and the intelligence inputs are shared among various agencies on a real-time basis. The investigation by NIA into the Pulwama attack so far has resulted in identifying the conspirators, suicide attacker and the vehicle provider. 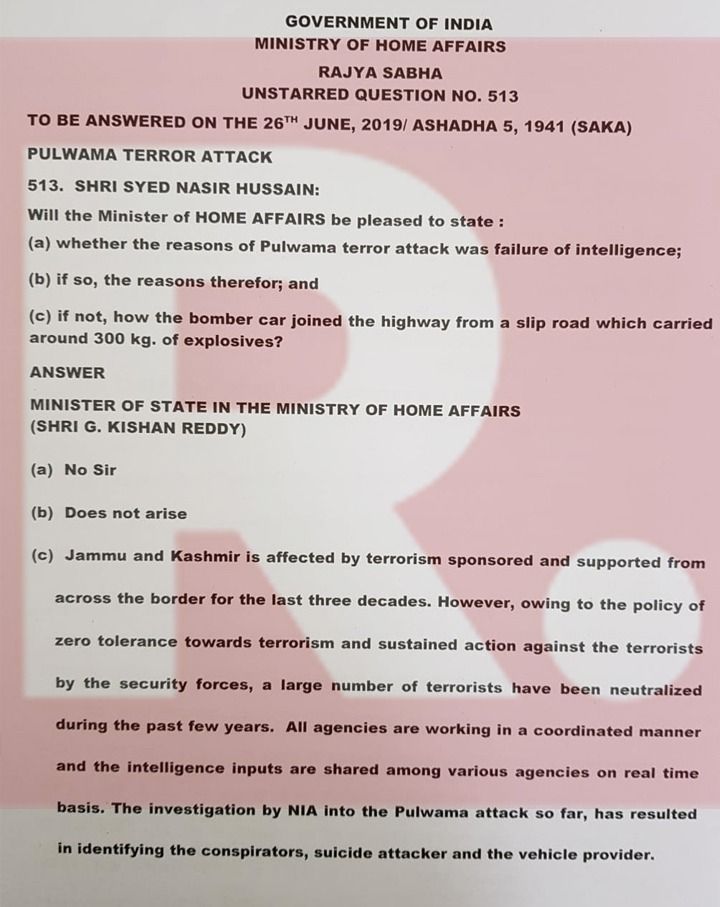 Earlier, in a big win for India's security forces, one of the main conspirators of the dastardly Pulwama terror attack in which 40 CRPF Jawans were martyred has been neutralised during an encounter in Tral.

Piecing together remnants of the vehicle recovered from the scene of the blast, the NIA investigators, with the support of forensic and automobile experts, identified the vehicle in which the JeM suicide bomber attacked the CRPF convoy, as a Maruti Eeco having chassis number MA3ERLF1SOO183735 and engine number G12BN164140.

READ: MASSIVE WIN: Forces Gun Down Key Terror Conspirator Whose Vehicle Was Used In The Horrific Feb 14 Pulwama Attack In Which 40 CRPF Jawans Were Martyred

The vehicle was sold to Mohammed Jaleel Ahmed Haqani, a resident of Heaven Colony in Anantnag in 2011, and subsequently it changed hands seven times and finally reached Sajjad Bhat, a student of Siraj-ul-Uloom, Shopian. The vehicle was purchased by Sajjad Bhat on February 4, as per reports.

Twelve days after the heinous attack, the Indian Air Force decimated the largest JeM terror base in Pakistan's Balakot across the LoC with precision air strikes, post which the neighbouring country was forced to initiate a sham 'crackdown' on terrorist groups on its soil.