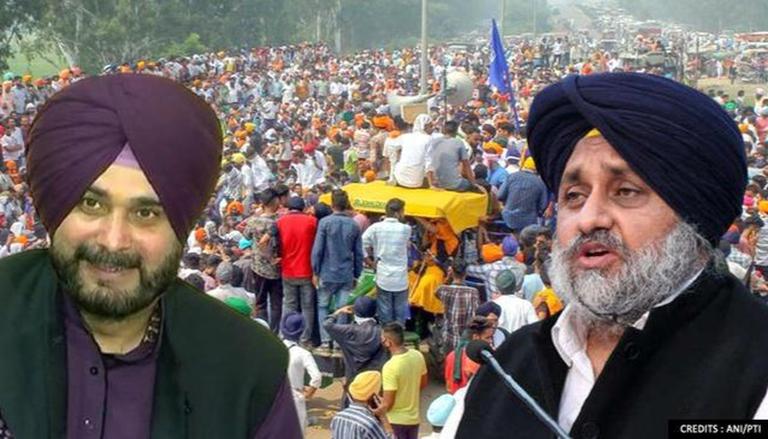 
Farmer bodies protesting the Centre's agriculture laws on Friday appealed to political parties to suspend their election campaign till the schedule for the Punjab Assembly polls is out so that the focus remains on their agitation.

Farmer leader Balbir Singh Rajewal, who presided over the meeting, said Congress and Shiromani Akali Dal (SAD) leaders said they will consult their party leadership before announcing their decision.

The Congress delegation was led by its Punjab unit chief Navjot Singh Sidhu.

In a tweet after the meeting, Sidhu said, "Had a positive meeting with Samyukt Kisan Morcha  Discussed the way forward !!"

Apart from the two parties, representatives of AAP, BSP, Lok Insaaf Party and the SAD (Sanyukt) took part in the meeting, for which the invite was not sent to the BJP for the party's pro-farm laws stand.

Meanwhile, the Shiromani Akali Dal requested the farmer bodies not to impose restrictions on political activities in Punjab, stressing that the protesting organisations should maintain the national character of their stir.

After the five-hour-long meeting, Rajewal told reporters, "We appeal to parties that electioneering should not be held before the polls are announced. The party, which will still insist on running an election campaign before poll dates are announced, we will consider them as against the farmers' agitation."

Rajewal further said, "As our Morcha (agitation) is going on and a different kind of situation prevails currently, farmers' attention is focused on the Morcha. When parties conduct electioneering and mobilise supporters for their programmes, it diverts their attention."

Some other farm leaders said representatives of political parties were asked not to indulge in electioneering or hold political rallies till the elections are announced as it may hurt the farmers' struggle.

However, they said parties are free to hold small functions that do not attract big gatherings.

Rajewal said all parties asserted that they stand behind farmers.

As many as 32 farmer bodies under the banner of the Samyukt Kisan Morcha had called the meeting.

Political parties were allotted time slots for the meeting and many were seen waiting at the venue here before their turn came.

Rajewal said they urged parties that their poll manifesto should be a legal document and most participants supported this.

Farm leaders also urged the parties to declare a time frame under which they will fulfil their promises.

Rajewal said they appealed to MPs and MLAs to give a dharna before Parliament against the farm laws.

All cases registered against farmers in the state during the ongoing agitation should be taken back, the ruling outfit was urged.

Congress leader Kuljit Nagra said they will discuss the demand raised by the farmer bodies on the party platform.

Nagra said Congress has always stood with farmers and continues to support them in their fight against the farm laws.

AAP's Kultar Singh told reporters that his party was the first to oppose the farm ordinances and later when these were introduced as laws. They will abide by whatever farm unions decide, he said.

The Shiromani Akali Dal (SAD) has requested the Samyukt Kisan Morcha to retain the national character of the agitation by not imposing any restriction on political activities in Punjab even as it offered all help to further strengthen the stir, a party statement said.

Senior SAD leaders Prem Singh Chandumajra and Maheshinder Singh Grewal said a conspiracy is afoot by the Centre to restrict the agitation to Punjab and then suppress it by imposing President's rule in the state.

Our fight is with the BJP-led government at the national level. Political activity has not been restricted due to the farmers' agitation in any other state. Going to people is as much your right as ours and this should not be restricted, Chandumajra said.

The SAD leaders said they will not hold rallies on any day on which the SKM announces a major programme in Punjab.