Wanted In India, Zakir Naik To Give Religious Sermons At FIFA World Cup In Qatar

Zakir Naik, an Indian fugitive preacher, will reportedly give religious lectures all through the football World Cup in Qatar, reports Qatar’s sports channel. 
Fugitive Zakir Naik, who is facing allegations of money laundering, backing terror-related activities and hate speech in India, is set to give religious lectures at the 2022 Fédération Internationale de Football Association (FIFA) football World Cup in Qatar. According to social media posts, "Preacher Sheikh Zakir Naik is present in Qatar during the World Cup and will give many religious lectures throughout the tournament," Al Arabiya News quoted Faisal Alhajri, a presenter at the Qatari state-owned sports channel Alkass, as saying on Twitter on Saturday. 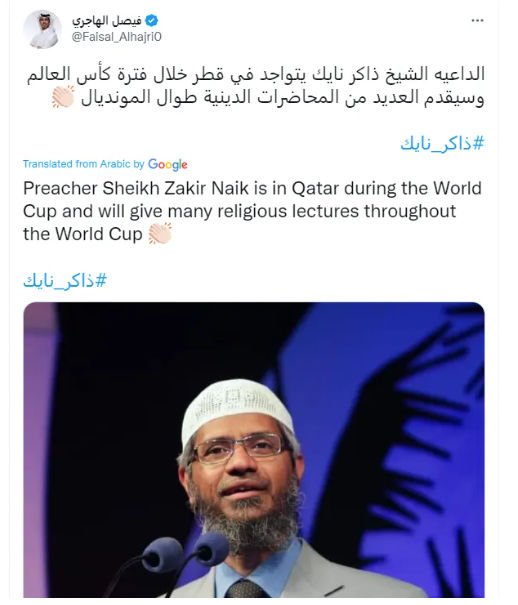 Speaking to Republic TV about fugitive preacher Zakir Naik being invited to the FIFA World Cup event, Author Ratan Sharda said, "Inviting Preacher Sheikh Zakir Naik on a global platform to deliver an address on Islamist supremacy is condemning. Even if I put Indian issues aside for timing, we know how Qatar instigated the entire horrific atmosphere in the wake of the Nupur Sharma episode. Zakir Naik is known as an Islamic preacher who hates every other religion. The global community should react."

Condemning the Qatari government's action for disrespecting basic human rights, Author Ratan Sharda said, "Naik backs terror and has also been inspiring the Muslim youth and terrorists in India and abroad to commit terrorist acts. He uses defamatory terms for religious scriptures and says Hindus are Jews. I want to know why such a person has been invited on a global platform for spreading hate."

READ | UAPA tribunal pulls up Zakir Naik, asks to appear in person at hearing for authentication

"Qatar is behaving like a new caliphate that has no respect for the sovereignty of the people. Is this an Islamist football club? Countries like Qatar have exploited poor people even from India. People have been living in inhuman conditions, hundreds have died and the world doesn’t question it," Ratan Sharda added.

Notably, the FIFA World Cup began in Qatar on Sunday. India banned Naik’s Islamic Research Foundation in late 2016, accusing him of encouraging and assisting its followers in “promoting or attempting to promote feelings of enmity, hatred, or ill-will between different religious communities and groups,” the ban was later extended for five years by the government. Naik has been living in exile as a runaway fugitive in Malaysia since 2017 after the Indian government levelled charges against him over money laundering.

MHA in a statement in 2021 extending the five year ban on Zakir Naik's IRF said Naik is a threat to the secular fabric of the country, "Naik's activities will disrupt the secular fabric of the country by polluting the minds of the people by creating communal disharmony, propagate anti-national sentiments, escalate secessionism by supporting militancy and some people may undertake activities which are prejudicial to the sovereignty, integrity, and security of the country. With regard to the activities of the IRF, it is necessary to declare it an unlawful association with immediate effect," MHA said.