'Rahul Gandhi Campaigned Tirelessly, Time For State Leaders To Introspect': Maharashtra Congress Pulls Out All The Stops In Letter Appeal To Party President

The Maharashtra Congress Committee released a resolution making an appeal to Congress president Rahul Gandhi withdraw his resignation from his post, at the same time took responsibility for the 'disappointing and shocking' Lok Sabha 2019 election results.

The Maharashtra Congress Committee released a resolution making an appeal to Congress president Rahul Gandhi withdraw his resignation from his post, at the same time took responsibility for the 'disappointing and shocking' Lok Sabha 2019 election results.

The letter noted that Rahul Gandhi campaigned across the length and breadth of the country and that it is time for the state leaders to "introspect and take responsibility" for the result.

Furthermore, stated that the party leaders and workers need the 'guidance and leadership' of the Gandhi scion, in this 'prevailing political' situation. 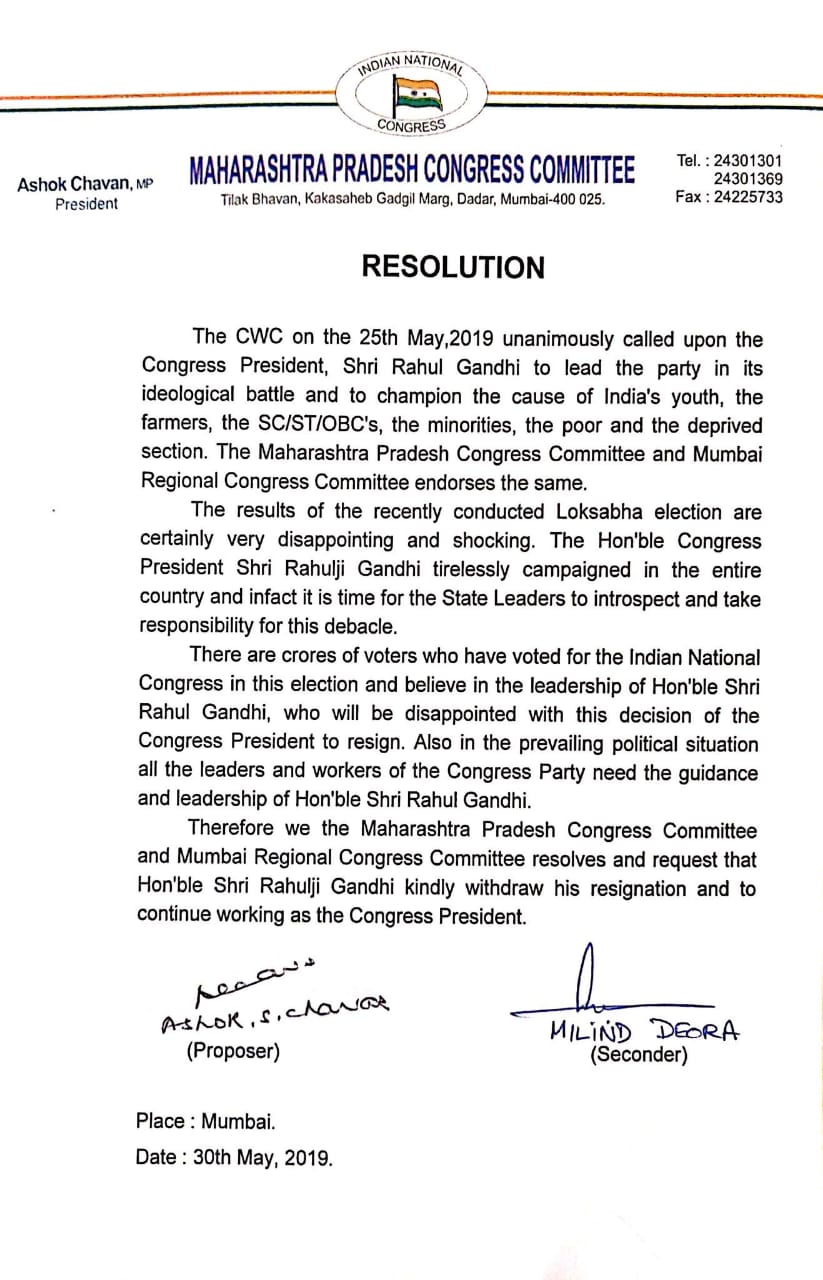 Rahul Gandhi is insistent on his drama to quit his position as the Congress president. As per sources, the Congress will formulate this mechanism and decide on its next party chief within three months. During this time, current party president Rahul Gandhi will continue to remain in the role and discharge his duties, including the overhaul of the party that he has been empowered to carry out by the Congress Working Committee (CWC).

So far, several top leaders have met Gandhi and urged him to continue to lead the party. Sources said that despite senior members making serious attempts to convince the 48-year-old party chief to rethink his decision, he remains unfazed.

READ| Yashwant Sinha Tells Rahul Gandhi To Go, Says 'if He does Not Stand Firm Regarding His Resignation, He Will Lose Public Estimation'

These leaders, sources said, maintained that Congress cannot afford to have someone new at the helm for rebuilding the organisation at this juncture and that the responsibility for the defeat is collective and not individual.

Along with that, amid political uncertainty within the party following the severe drubbing it received in the Lok Sabha elections, Congress on Thursday barred its spokespersons from representing the party on news channel debates for a month. Taking to Twitter, Congress communications in-charge Randeep Singh Surjewala requested all media channels and its editors to not place any Congress representatives on their shows.

.@INCIndia has decided to not send spokespersons on television debates for a month.

All media channels/editors are requested to not place Congress representatives on their shows.

The Congress won 52 seats in the recent general elections, which is just eight more than 2014, in the outgoing Lok Sabha. The NDA, on the other hand, registered a massive victory, winning 352 seats to retain power. The BJP alone won 303 seats - its highest tally ever.