As a lookout notice has been issued by the agencies against P Chidambaram after he allegedly remains untraceable after the Delhi High Court rejected his anticipatory bail plea in the INX media case, former Congress president Rahul Gandhi alleged that the Centre is misusing power. In a tweet on Wednesday morning, Rahul Gandhi said that the Centre under Prime Minster Narendra Modi is attempting a 'character assassination' of the former finance minister.

As the agencies have put the former finance minister under the scanner for his alleged involvement in money laundering and corruption cases, his lawyer and Congress leader, Abhishek Manu Singhvi refuted the claims of non-cooperation by the ED and CBI. He said that he is still an accuse in the INX media case and not a convict, and that the CBI had summoned him only once when he went, and ED had summoned him 9 to 10 times when he cooperated. He then added: "We have to see if it is prosecution or persecution." Singhvi also spoke in the similar lines to that of Rahul Gandhi saying: "If you say they are great, then they will not touch you." He also said in a tweet that Chidambaram is not an absconder as he was with Sighvi till 06:30 on Tuesday evening.

#LIVE on #ChidambaramMissing | ED called him 8-9 times, he has always responded. He is co-operative: Abhishek Manu Singhvi, senior Congress leader 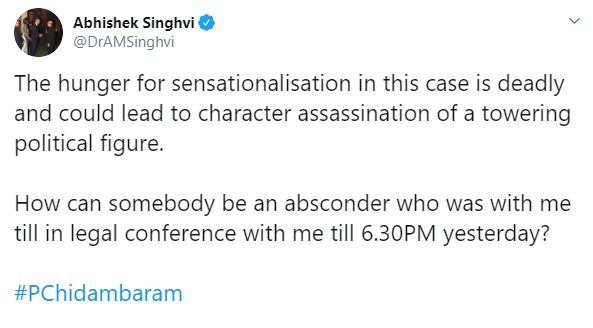 Chidambaram on the run?

While the CBI reached Chidambaram's residence to question him in the investigation, top sources had told Republic that the Congress leader may be on the run over possibilty of arrest, if required by the probe agency. Top sources also informed that the former Finance Minister under UPA government was earlier at the residence of Congress leader Abhishek Manu Sighvi, but left after an hour-long visit. Sources further added that Chidambaram has gone underground. He is still missing at the time of publishing the story.

Here's a timeline of the development after his bail was rejected: