Rahul Gandhi in response to J&K Governor Satya Pal Malik's 'feeble' tweet accepted his invitation to lead a visit to the Kashmir valley along with a delegation of Opposition leaders.

Rahul Gandhi in response to J&K Governor Satya Pal Malik's 'feeble' tweet accepted his invitation to lead a visit to the Kashmir valley along with a delegation of Opposition leaders.

The former Congress president, however, said that there should be 'no conditions' attached to his visit to the sensitive Kashmir valley, in retaliation to Malik's allegations that Gandhi was putting 'many conditions' for his visit.

I accept your invitation to visit Jammu & Kashmir and meet the people, with no conditions attached.

When can I come?

The to-and-froing between Gandhi and Malik have been going since Rahul Gandhi on Sunday spoke about reports of 'violence' emerging from Jammu and Kashmir saying, "People were dying in the state and the situation was not normal as claimed by the government."

Firing back at Gandhi for his statement alleging 'violence', the Governor of J&K on August 12 asked Rahul to first 'come, see and then speak' over the prevailing Kashmir situation, furthermore even offered to send the former Congress president a plane.

However, in quick retaliation, the Wayanad MP explicitly stated that while he won't 'need an aircraft' but 'freedom' should be assured for him to travel and meet mainstream leaders and soldiers deployed in the valley.

In a tweet the next day, on August 13, the former Congress president said that along with a delegation of Opposition leaders, he would take the invitation to visit Jammu and Kashmir, but the Governor needs to ensure freedom to meet with the residents of the state, mainstream politicians like NC leader Omar Abdullah, PDP chief Mehbooba Mufti, JKPC president Sajad Lone and others, who still under house arrest, and the freedom to also meet the armed forces deployed in the valley. 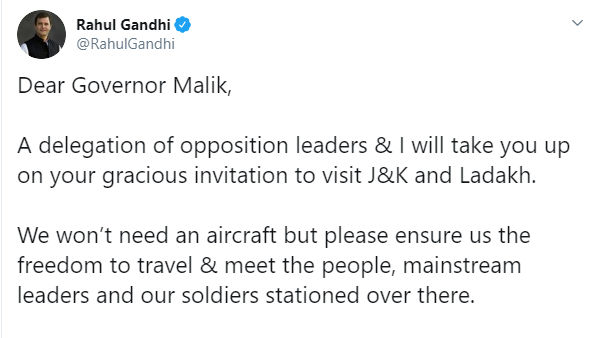 However, on Tuesday evening, Malik accused Gandhi of 'responding to fake news,' accused him of 'politicising the matter' by seeking a trip along with Opposition delegates and even stated that Rahul Gandhi has put forth 'many conditions' for visiting Jammu & Kashmir.

In a statement, he accused Gandhi of creating 'further unrest and problems' for common people. He further notified that the 'many conditions' for his visit to Jammu and Kashmir is referred to the local Police and administration to further examine.

Gandhi has been tugging on the threat, despite government's emphasis that the situation in the state is normal no untoward incident has occurred since the abrogation of Article 370. Even the Supreme Court refrained from intervening in the state and adjourned the plea for two weeks and rejected passing any order sought by the PIL. The apex court explicitly stated that it won't interfere in J&K. Observing that present situation in J&K is "very sensitive" and it should be ensured that there is no loss of life there, the Court highlighted the fact that reasonable time should be given to the government to ensure normalcy in J&K.