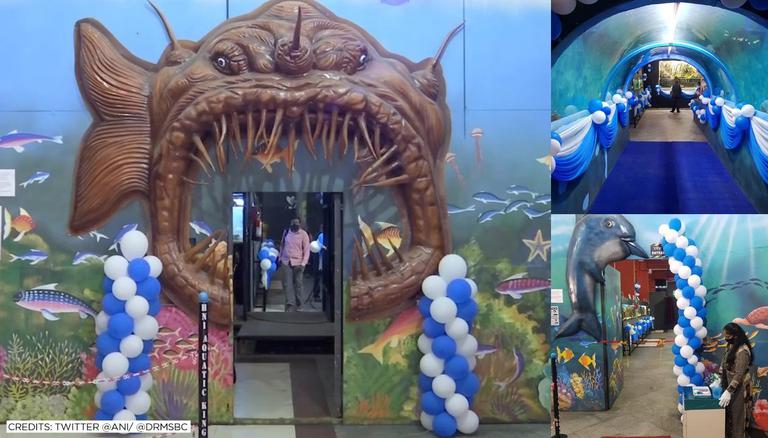 
Krantivira Sangolli Rayanna Railway Station also known as Bengaluru City Railway Station has become the first railway station in India with a movable freshwater tunnel aquarium. According to PTI, the aquarium has been opened by the Indian Railway Stations Development Cooperation Limited (IRSDC) in collaboration with the HNi Aquatic Kingdom. In a statement, the IRSDC said that the aquarium is based on the concept of Amazon River and is one-of-its-kind, promising to be a visual treat and a passenger’s delight.

As per reports, the 12-feet long aquatic kingdom at the railway station is Indian Railways first paludarium that houses myriad flora and fauna. The Indian Railways said that the entrance of the station now gives a glimpse into marine life, with a beautiful dolphin humbly greeting visitors with a slight bow and a smile. A 3D selfie area, 20 feet of glass periphery are also some attractive features of the new facility.

READ | Deepika Padukone tests positive for COVID-19, under quarantine with family in Bangalore

Further, the railway station is home to various aquatic animals such as alligators, stingrays, sharks, lobsters, snails and shrimps. The aquarium is reportedly adorned with natural rocks and splashes of driftwood, artificial coral rocks. In addition to enhancing the passenger experience, the initiative would be a revenue earner for Indian Railways as a nominal entry fee of  Rs. 25 has been kept per passenger.

"This aquatic kingdom will entice passengers and visitors and it will not only be an enjoyable experience but also educative to experience a life-size kingdom of fishes here,” IRSDC MD and CEO S K Lohia said.

“Even following strict COVID related protocols, up to 25 visitors can visit the aquarium at a time,” Lohia added.

IRSDC stated that the establishment of the aquarium comes after it was entrusted with the mandate to undertake facility management at five railway stations - KSR Bengaluru, Pune, Anand Vihar, Chandigarh and Secunderabad - to enhance customer experience and make travel a safe and hassle-free experience. Shortly, IRSDC will also be undertaking facility management of 90 more stations in a phased manner. Meanwhile, it is worth noting that the news came on the same day when the Bangalore Metro Rail Corporation (BMRCL) resumed operations in the Karnataka capital from 7am to 6pm.