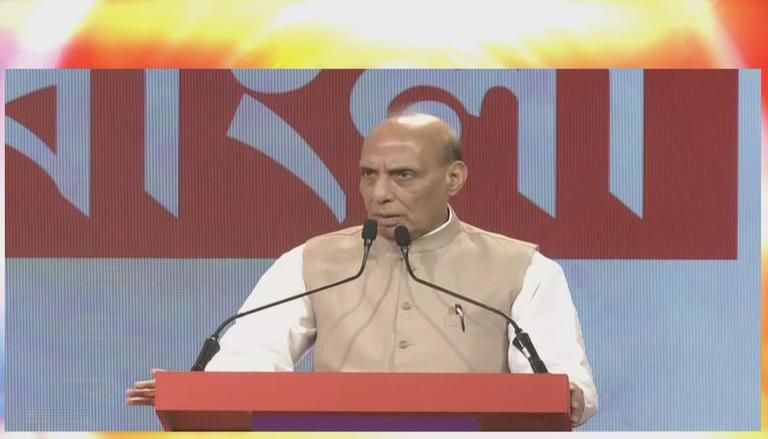 Addressing the Republic Bharat Summit 'Rashtra Sarvopari' Union Defence Minister Rajnath Singh said, "Republic media group has won the trust of people in a short time. This media group has managed to reach the people. It is a matter of pride for the group." Speaking about the theme "Rashtra Sarvopari" (Nation First), he said, "As far as theme is concerned, it is important, there are no two ways about it."

Adding further he said, "Without the feeling of national pride, no country can make progress. We should keep the nation at the centre of all our efforts. This can help us to take the country to heights. We should keep striving to make the country supreme and developed. We should take a pledge to make India number one in education, agriculture, health, industries, technology and other sectors."

"When the country was newly independent, it was weak I agree. But India was the number 6 economy in 1950. In 1960, it slipped to 8th. Then in later decades, India went out of the top 10 economies. After that, in the 90s economy gained strength again. Measures were taken under Atal Bihari Vajpayee for progress and development," Singh said.

He also lauded the infrastructure programme of former PM Atal Bihari Vajpayee. "Now India is once again in the top 10 economies. In 2022, India has surpassed Britain and is in the top 5 economies in the world," Rajnath Singh said.

'GST has been instrumental'

Speaking about the achievements of PM Modi-led government, Singh said, "Economy made dynamic by the government. Structural reforms were carried out. The atmosphere for investment was created. The atmosphere for investment was also created." He further said, "In 2017, some economists and political parties opposed the GST. Today, I can say that due to this reform there is tax buoyancy in the country. GST has been instrumental."

Recalling the meeting on the implementation of the Jan Dhan Yojana in the Republic Summit, the Defence Minister said that PM Modi called the programme a 'miracle'. Singh said, "I realised he not only wanted to make poor account holders but also stakeholders in the country's economy. That's why he launched the Jan Dhan Yojana."

We also have to make the weaker sections of the society a stakeholder in the country. Which is why PM Modi introduced the Jan Dhan Yojana: Defence Minister @RajnathSingh_in at #RashtraSarvopariSummit. Tune in here - https://t.co/IpHdcur0iJ pic.twitter.com/82IXwygKtg

"Jan Dhan, Aadhaar and Mobile, these three factors pushed digital economy... The delivery mechanism in the country has improved. Our delivery system is more transparent now and more effective. It is due to this, that the poor are receiving direct benefits (through DBT)," Rajnath Singh said.

'Rajiv Gandhi would have been happy had he been here today'

Recalling the era of former PM Rajiv Gandhi, Singh said, "Rajiv Gandhi had said that only 15 paisa reaches the pocket of the poor if we send 100 paise. But now, I can say that with full belief that the total 100 paisa reaches pocket of poor if 100 paise sent by the government. I won't say that we have ended corruption, but we have taken steps in minimizing the corruption."

Rajnath Singh also asserted that the Centre has been pushing infrastructural development in the country. "Earlier, only the rich could take flights. But now, everyone can travel via air. Metro rail is now in smaller cities too. The government is working to develop world-class infrastructure quickly," Singh said at the Republic Bharat Summit.

He also spoke about the COVID-19 pandemic and the government's response. "During COVID-19, more than 80 crore people were provided food security. This has never happened in the history of India, or the world," the Defence Minister said. On inflation, he said, "Inflation has risen in India but it has not been allowed to get out of control."