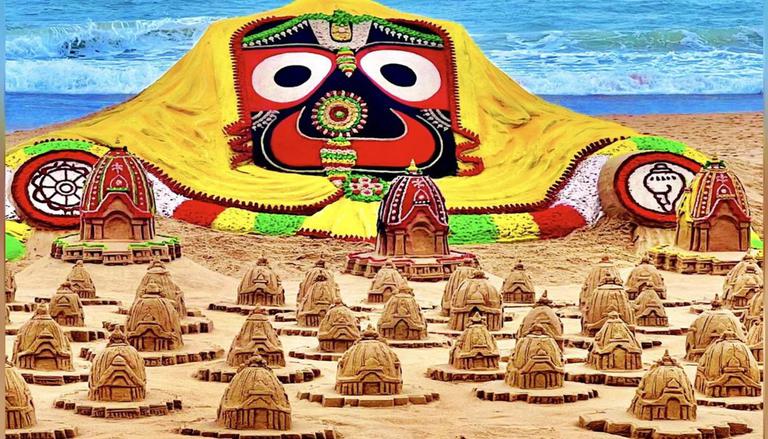 
As the famous Rath Yatra commences on July 1, Friday, Padma Shree awardee, sand artist Sudarsan Pattnaik, curated 125 chariots to honour Lord Jagannath's festival in his home state Odisha. Along with 125 chariots, the sand art at Puri beach consisted of a huge sculpture of Lord Jagannath. The sand sculpture also had 3 iconic Raths which are used by the devotees of Lord Jagannath during the Yatra. Every year, new chariots are built for the festival.

Jai Jagannath…🙏
On the auspicious occasion of the Rath Yatra . My SandArt at Puri beach #125SandRatha .
#RathaYatra2022 . pic.twitter.com/qrUCqoOfbA

Pattnaik also built another sand art in order to wish the devotees of Lord Jagannath, pledging to reduce the use of single-use plastic. The latest sand art has a huge message saying, "let us pledge to say NO to single-use plastic," along with three iconic Raths of the famous Yatra.

My SandArt at with message “let us pledge to say NO to single-use plastic”. #RathaYatra 🙏 https://t.co/Tk7dJyjDDI pic.twitter.com/PeyIcXyIPZ

On Puri Beach in Odisha, Sudarsan Pattnaik broke the Guinness World Record for building the biggest sand castle ever. In June 2019, Skulptura Projects GmbH in Binz, Germany, surpassed his record. Other than this, the famous artist is also the recipient of the Italian Sand Art Award, 2019, notably, he is the first Indian to receive this honour.

On Friday, the Pahandi festivities for Lord Jagannath's Rath Yatra got underway in Puri, Odisha. After a two-year Covid-induced suspension, devotees are now permitted to take part in the Jagannath Rath Yatra this year.

Security measures have been taken by the Odisha Police with the anticipated festival audience in mind. Following the proper rites, worshippers draw the three Raths of Lord Jagannath, Devi Subhadra, and Lord Balabhadra and station them in front of the Singha Dwara of the Shreemandira during the Jagannath Yatra.

After the procession's events end, the titular monarch of Puri, Gajapati Maharaja Dibyasingha Deb, will conduct Chhera Pahnra (sweeping of three chariots). After that, the chariot pulling would begin. To ensure the event is conducted safely, more than 180 platoons of armed police officers, comprising 1000 personnel of various grades, are stationed in and around Puri. Additionally, around 50 CCTV cameras have been installed on Grand Road and in other locations across the city.