Ravan Dahan In Ahmedabad: A Glimpse Into The Pompous Celebrations

Ravan Dahan in the city of Ahmedabad is one of the most celebrated festival of the city. Here are a few details you should know about the Dussehra celebrations.

Ahmedabad is gearing-up for the celebration of Dussehra. The city, situated on the banks of the Sabarmati river, celebrates Dussehra with various religious rituals and mouth-watering snacks. Like every year, Ahmedabad is planning to host pompous Dussehra festivities around the city. This year, too, the Archer depot and Harekrishna Temple, Bhadaj, will build the tallest Ravana's effigy in the city. Here are all the details about Dussehra's processions in Ahmedabad.

Victory of Good over Evil signifies Dussehra. Let the Evil vanish and divinity prevail within and around us. #HappyDussehra

Details about the Ravan Dahan in Ahmedabad

Reportedly a 40-feet tall effigy is being built at the Sabarmati's Archer Depot and Harekrishna temple. Like every year, Harekrishna temple will have effigies of Meghnath and Kumbhkaran along with Ravan. The Vijayadashami processions in the city will start early in the morning and will continue until the Ravan Dahan. Here is a glimpse of last year's effigy erected at the Harekrishna Temple. 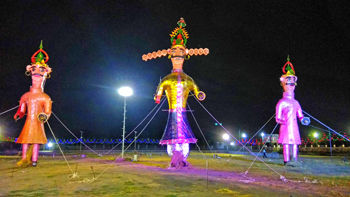 Also Read | Dussehra 2019: Check Out The Actors Who Have Played Ram And Ravan

How long will the queue be this Dussehra

Apart from the tall effigies of Ravan, the city is famous for its delectable street food. The people of Ahmedabad spend their nine nights gorging on hot jalebis and fafdas. Reportedly, the city has made about 300 tonnes of fafda and over 150 tonnes of jalebis this Navratri. A recent report suggests the mithai shops of Ahmedabad reuses food items like oil, ghee and food colours, especially during Navaratri to meet the constant demand for snacks. So, to avoid such outcomes this Navratri, the Ahmedabad Municipal Corporation (AMC) has laid restriction on makeshift stalls in the city. The civic body has asked every makeshift snack stall to produce a proper food license to set-up a stall in the city, hoping the restriction will help measure the adulteration in food.

Also Read | Kullu Dussehra: Everything You Need To Know About The Celebrations

Also Read | Kota Dussehra Mela: All About Its Celebrations And Festivities