Regional Leaders Omar Abdullah, Mehbooba Mufti And Sajad Lone Up In Arms At Mention Of Delimitation Process In J&K

Promptly after taking charge at the helm of the Ministry of Home Affairs, Amit Shah has over the last two days held multiple meetings, with sources telling Republic TV of Jammu and Kashmir being the crux of deliberations.

Promptly after taking charge at the helm of the Ministry of Home Affairs, Amit Shah has over the last two days held multiple meetings, with sources telling Republic TV of Jammu and Kashmir being the crux of deliberations.

In a recent polity development, sources have told Republic that the Home Ministry is considering to amend delimitation in Jammu and Kashmir constituencies, and appoint a Delimitation Commission.

However, the proposal to unfreeze the delimitation in the state has been revolted by regional leaders- Omar Abdullah of the National Conference (NC), PDP chief Mehbooba Mufti and Sajad Gani Lone, the president of JKPC.

Mehbooba Mufti stated that she was 'distressed' to hear about the plan, furthermore stating that 'forced delimitation' is an attempt to inflict 'another emotional partition' of the state.

Distressed to hear about GoIs plan to redraw assembly constituencies in J&K. Forced delimitation is an obvious attempt to inflict another emotional partition of the state on communal lines.Instead of allowing old wounds to heal, GoI is inflicting pain on Kashmiris

In a serial rant, Abdullah notified that the freeze on delimitation was done to bring the state 'in line' with the country and that the freeze was applied on the entire country until 2026, and not specifically to Jammu and Kashmir. He went on to say that the BJP is welcome to apply delimitation to Jammu and Kashmir, however, NC will 'oppose, tooth and nail' any attempt without the mandate of people.

The freeze on delimitation was applied to J&K and was done to bring the state in line with the rest of the country. The same was challenged & upheld in both the High Court of J&K & the Supreme Court.

A freeze on delimitation has been applied to the entire country until 2026 and contrary to the way some ill informed TV channels are trying to sell it it isn’t just a J&K specific freeze.

It’s rather surprising that the BJP, which talks about bringing J&K at par with other states by removing 370 & 35-A now wants to treat J&K differently from other states in this one respect.

When delimitation takes place in the rest of the country the BJP is welcome to apply it to J&K until then we in the @JKNC_ will oppose, tooth & nail, any attempt to make changes without a mandate from the people of the state.

The former chief minister of Jammu and Kashmir then comprehensively elucidated the background of delimitation of assembly in the state. 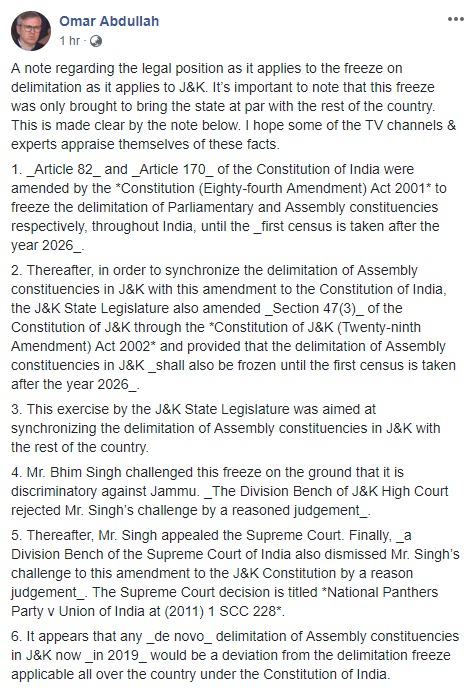 Whereas, Lone responded on the development questioning the 'earth-shattering' hurry.

Hope and pray that media reports about Kashmir aren’t true. Don’t understand the earth shattering hurry. And this perception of being wronged at a provincial level. If thousands of graves in Kashmir dont add up to people being wronged. Wonder what wronged means.

The Delimitation process will involve altering the scope and size of Assembly constituencies in the state and will further determine the number of seats to be reserved for Scheduled Castes (SC).

In the aftermath of accession to India, the administration of Shiekh Abdullah sliced 43 seats for Kashmir, 30 seats for Jammu and 2 for Ladakh region. However, at present, there are a total of 87 assembly seats with 46 seats in Kashmir, 37 in Jammu and 4 in Ladakh.

This step will allow the Governor to set up a Delimitation Commission. The Modi 2.0 Cabinet is revisiting the files that were previously stalled, as per inputs.

According to sources, high-level meetings are being held ever since Amit Shah official took charge in the Home Ministry, along with senior officials including the NSA, Home Secretary, the IB chief, RAW chief, and Army officials along with the Governor of Jammu and Kashmir Satya Pal Malik.

Throughout the election campaign, the BJP chief had reiterated that the party would abrogate Article 370 and 35A from the state, which also found space in BJP's manifesto. However, there was no confirmation of whether the issue was discussed in the first Home Ministry meeting.