The Resident Doctors Association at the King George's Medical University (KGMU) in Lucknow joined the protests by announcing an indefinite boycott of medical services except for emergency and ICU from Monday if demands are not met.

The Doctors protest which emerged from Kolkata's NRS Medical College and Hospital (NRSMCH), gained more momentum as doctors from across the country stood in solidarity with their peers in Kolkata. On Saturday, the Resident Doctors Association (RDA) at King George's Medical University (KGMU) Lucknow too joined the lot by announcing an indefinite boycott of medical services except emergency and ICU from Monday if demands of doctors are not met by Sunday.

In a letter which was signed by Dr Nayani Amrin, General Secretary and Dr Umesh Tripathi, President at the RDA at King George's Medical University condemned the incident at NRSMCH on 10th June 2019 where an intern Dr Paribaha was attacked by the family of a deceased. The letter added:

"Around 200 vandals rushed to the campus after death of their 85 years old relative (who was critically ill at the time of admission). Dr. Paribaha and his collegues, has been battered, assaulted and maltreated by the mob and has suffered a depressed skull fracture followed by convulsion and was therefore admitted in ICU. West Bengal government and its police force were merely mute spectators of the incident." 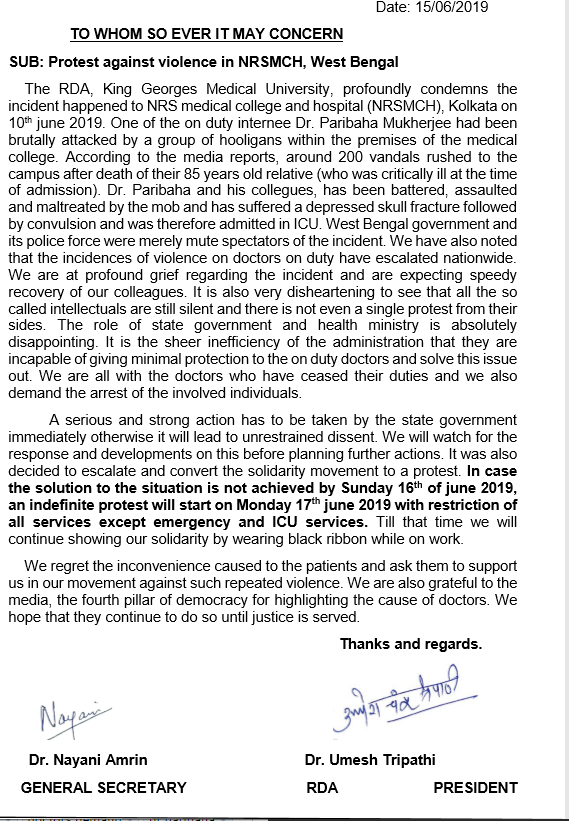 The RDA also expressed its grief and said that it hoped for a speedy recovery of their colleagues. In addition, they also showcased their disappointment towards the state government's stand on the whole issue:

"The role of state government and health ministry is absolutely disappointing" the letter said.

Later, the RDA assured full support to the doctors who were protesting and stated their demands, which include arrest of the individuals who attacked Dr Paribaha and his colleagues:

"We are all with the doctors who have ceased their duties and we also demand the arrest of the involved individuals.            A serious and strong action has to be taken by the state government immediately otherwise it will lead to unrestrained dissent."

READ | A VIRAL CATastrophe! Imran Khan's Party Accidentally Turns On The Cat Filter While Addressing A Briefing LIVE On Facebook, Netizens Have A Field Day

The association concluded its statement by asserting that they would demonstrate an indefinite protest starting on Monday, if the pan-nation demands of all those who are protesting are not met by Sunday. The RDA at KGMU has been protesting by wearing black ribbons at work. The agitation has brewed in other states following the strike in Kolkata, with doctors across India standing with their peers in solidarity. Doctors from Mumbai, Bengaluru and Chandigarh too joined in.  Meanwhile on Friday, Mamata Banerjee's nephew Dr Abesh too joined the protests. Abesh was seen leading the protests at the KPC Hospital this morning.