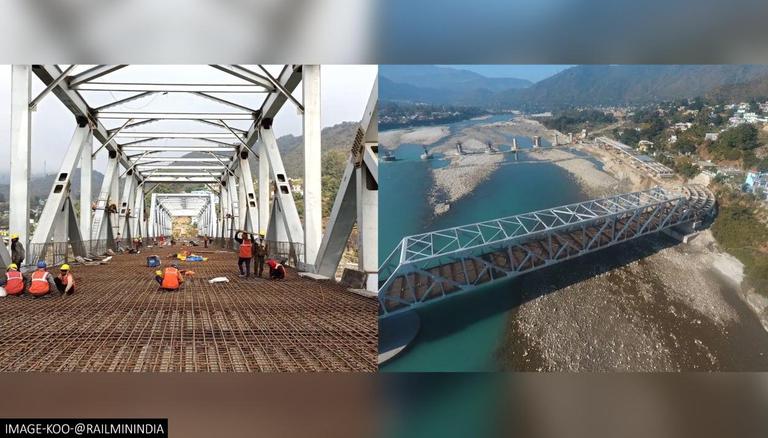 
Giving updates from the ongoing Char Dham Railway Project, Indian Railways on Tuesday shared images from the project which is being constructed between Rishikesh and Karnaprayag.

Sharing the images from the Rishikesh Karnaprayag project, the Ministry of Railways through his official Koo handle said that the project is gaining momentum. "Catch glimpses of Piers coming up over Alaknanda River for this important project. It is the longest bridge (489mts) of the project. It shall connect Srinagar town to the proposed Railway station", it said.

With an aim to complete the railway project at the earliest, Indian railways have been speeding the Char Dham railway project in Uttarakhand which includes two major projects focused on connecting the four important points of the Char Dham Yatra and further establishing a broad gauge line to connect the city of Rishikesh and Karnaprayag.

Previously, the Minister of State for Railways, Darshana Jardosh also paid a visit to the state for reviewing the ongoing rail project. As a part of her visit, she also went to the site of the Rishikesh Karnaprayag project and checked the tunnel work and broad gauge line.

The central government's ambitious Char Dham Railway Project majorly aims to connect the four Dhams including Kedarnath, Badrinath, Gangotri, and Yamunotri through the rail network. While the first step of the primary engineering survey has been completed, the final location survey is in the process to analyse whether the rail network will be laid at the place.

Along with that, the second part of this project includes the construction of a new broad gauge line between Rishikesh and Karnaprayag which will connect on the Garhwal Hills. The project will be constructed on a stretch of over a 15-km long tunnel and is being constructed at a cost of Rs 16,000 crore. The rail link also aims to facilitate easy travelling for pilgrims further savings their time and travel expenses and will also boost industrial development.

Notably, this project will also complement the Char Dham Highway project and stands as a significant move towards military importance. Through the completion of the project, the Indo-China border will come close to the rest of the country by railways.