Designer Sabyasachi Mukherjee shared a series of images as 'special post' on January 26 for her colleague Aditi Mittal who is fighting cancer to inspire women.

Designer Sabyasachi Mukherjee shared a series of images as 'special post' on January 26 for her colleague Aditi Mittal who is fighting cancer. The designer shared her battle with the disease on his account with more than four million followers in order to send a message to every woman 'to keep fighting'. In the series, Mittal can be seen getting her head shaved as she prepares for chemotherapy and explains that she decided to 'use red lipstick to look her best' for the operation.

In the same caption, the 45-year-old designer explained that he and Mittal have been working together for 14 years and she has defeated cancer in the past. He further said Mittal was initially a 'tomboy' and then became a 'beautiful woman' and a mother of a one-year-old boy. Sabyasachi explains her personality as 'fun-loving' and a 'little eccentric'. Through great followership at Sabyasachi's account, at Mittal's request, they wanted to reach out to women and lay emphasis on 'little things' because 'it matters'. In the images, Mittal's husband cuts her hair as she readies herself for chemotherapy.

Read - Sabyasachi's Collaborations With Eminent International Brands That Made Headlines

Read - Sabyasachi Mukherjee X H&M Is On The Way, Designer Creates History With This Collab

In the same series, many netizens have offered their prayers for Mittal and said that 'may God give her strength'. Some of the Instagram users were also seen calling Mittal as a 'hero' and a 'survivor' for tackling cancer once. Many believe that she will 'get through it again' and 'come out much stronger than before'. One of the internet users also said she looks beautiful and encouraged Mittal to 'keep fighting'.

One internet user wrote, “More power to Aditi, that beautiful and confident smile will conquer it all. As long as there is strength and hope. God bless; Godspeed.”

Another said, “Power to you. With those confident eyes, I m sure u l fight this disease with strength and courage.”

One Instagram user said, “Wishing her a speedy recovery! More power, more strength, and much love to her.” 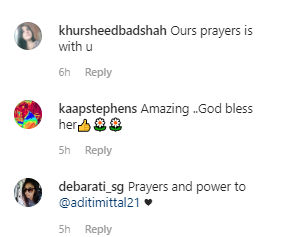 Read - Laxmi Agarwal Takes Fashion Inspo From Her Reel-self, Dazzles In A Sabyasachi At An Event