Justifying its reason to oust Sachin Vaze, the Mumbai Police order stated that Sachin Vaze allegedly abused his position to jeopardize the law & order in state 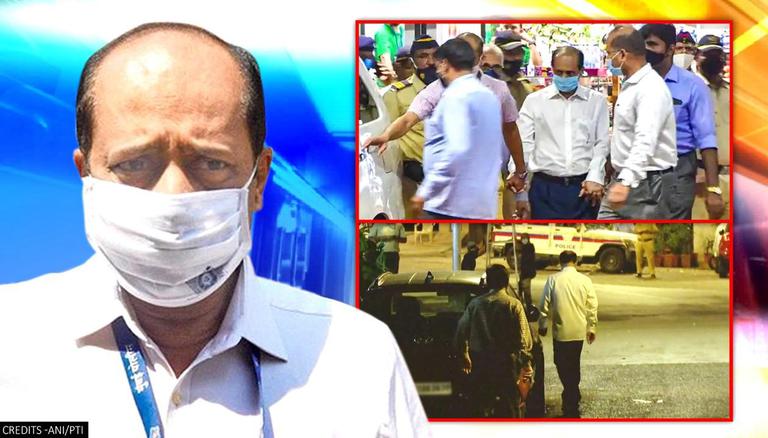 
Arrested Mumbai Police API Sachin Vaze was dismissed from service on Tuesday by the orders of Police Commissioner Hemant Nagarale even as the NIA probe into the Antilia bomb scare & Mansukh Hiren death cases in which the former is an accused continues. As per the Mumbai Police's order of dismissal issued to Sachin Vaze, the erstwhile head of the Crime Intelligence Unit (CIU) had conspired with others and had placed the gelatin-laden SUV near Carmichael Road in South Mumbai with the intention of creating terror in the minds of the people and had also reportedly written a letter to a renowned businessman to extort money for himself and others.

Mumbai Police's dismissal order to Sachin Vaze claimed that the latter had attempted to destroy evidence that could incriminate him easily by dumping CPUs, DVRs and other articles and that the items had been recovered, Further, it stated that Vaze was allegedly involved in the murder of businessman Mansukh Hiren and that a probe was underway to find out if the latter had destroyed evidence and had been killed to stall the investigation in the Antilia bomb scare probe. The order stated that Sachin Vaze had stayed at the Oberoi hotel for over 100 days using a fake ID and that he had in his possession 62 rounds of live ammunition believed to be procured from unknown persons and criminals.

The report claimed that Sachin Vaze had lost 25 rounds of live ammunition of his service pistol which he could have perhaps used without informing the police department. The order accused Sachin Vaze of being involved in the commission of offences of impersonation, forgery, the disappearance of evidence and possession of unauthorised ammunition along with placing the explosive-laden vehicle. It also stated that Rs 5,73,500 had been recovered from a vehicle used by Sachin Vaze and that various companies had been floated by the suspended API having crores of rupees in their bank accounts.

Justifying its reason to oust Sachin Vaze from service, the Mumbai Police order stated that Sachin Vaze allegedly abused his position to jeopardize the law & order situation in the state. Further, Vaze is alleged to have killed Mansukh Hiren when investigation agencies began a probe into his alleged crime and destroyed evidence to mislead the agencies. The Mumbai Police commissioner asserted that it was not reasonably practical to hold a departmental enquiry against Sachin Vaze in view of the above-mentioned facts. 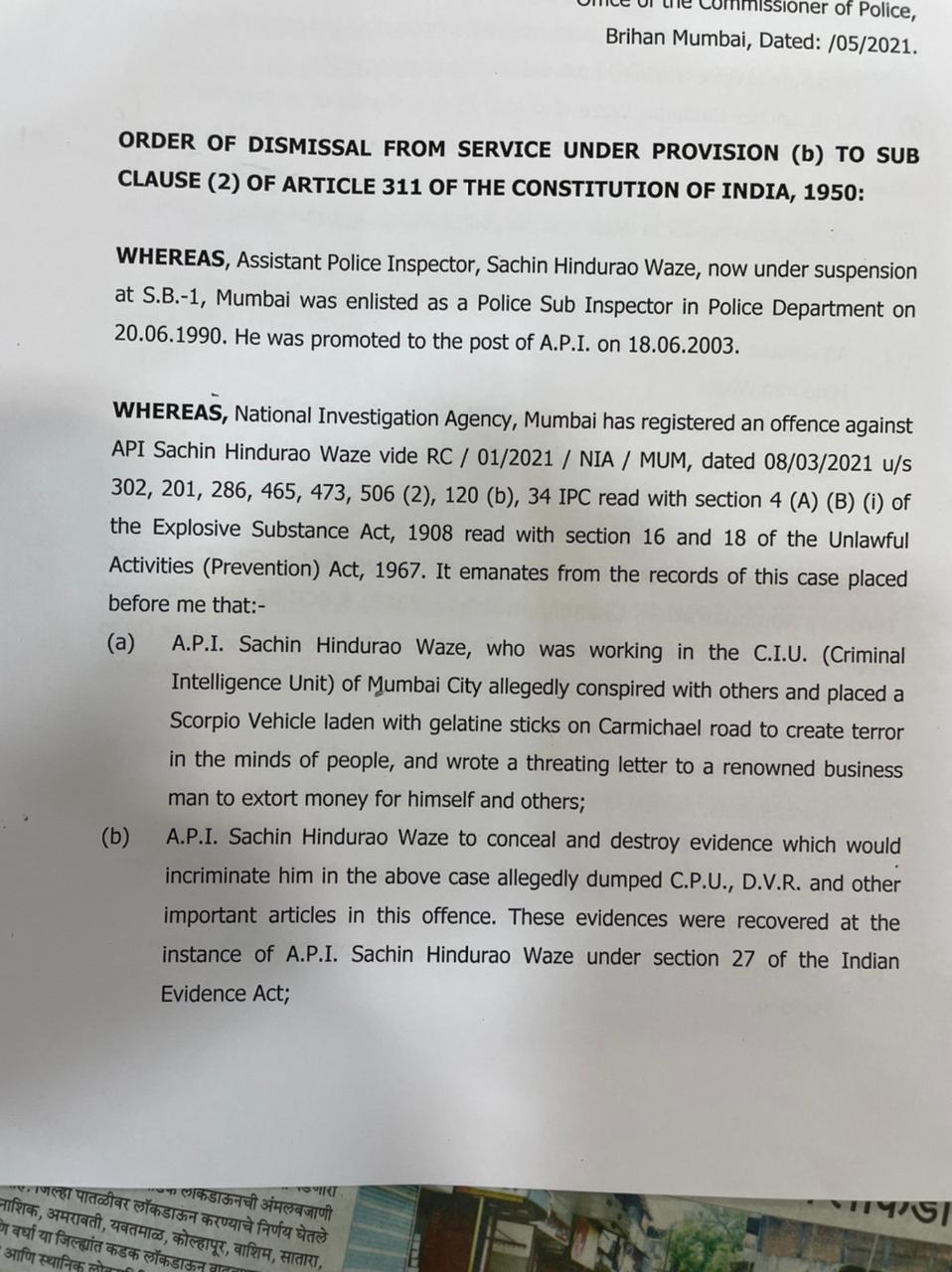 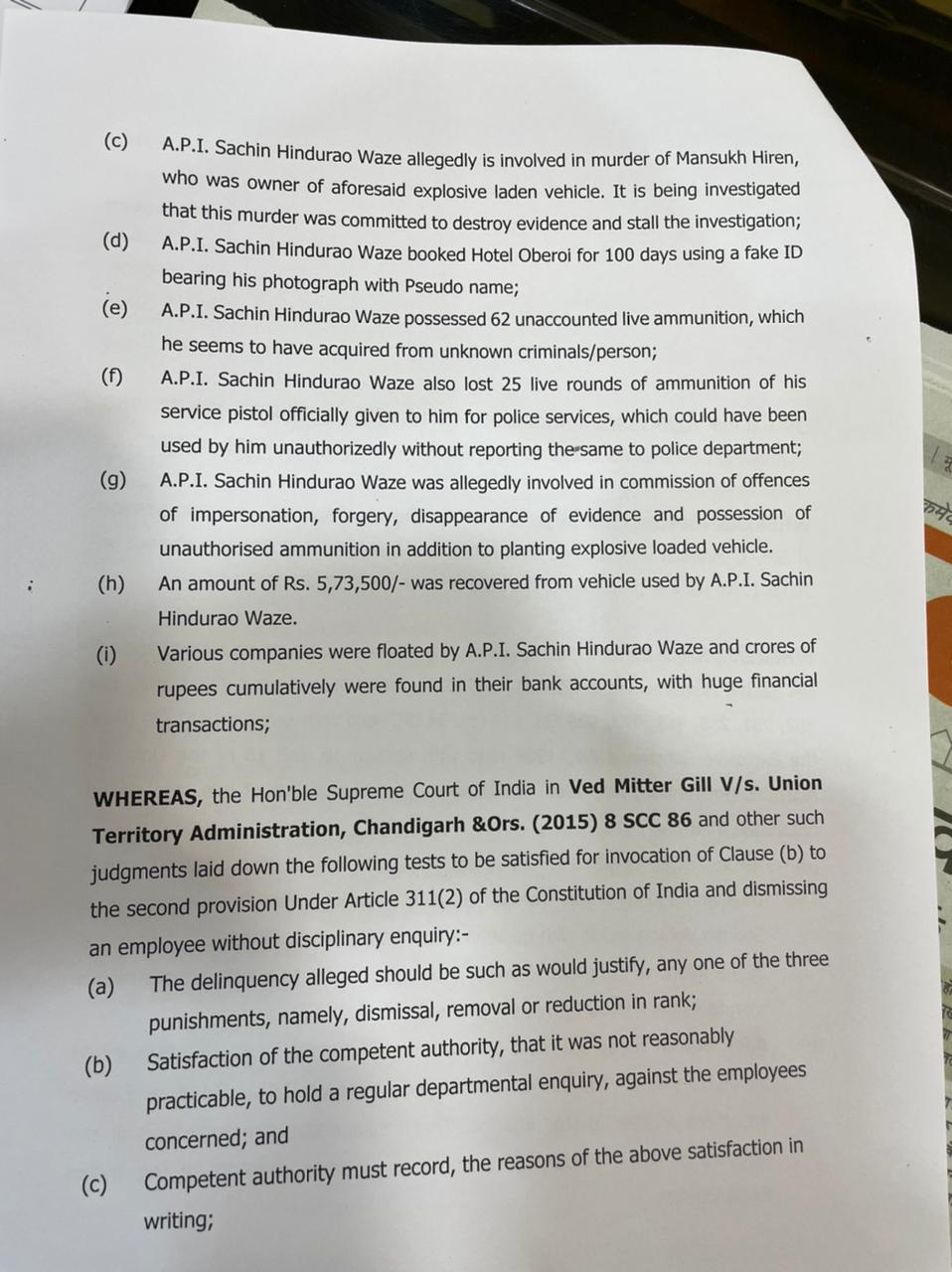 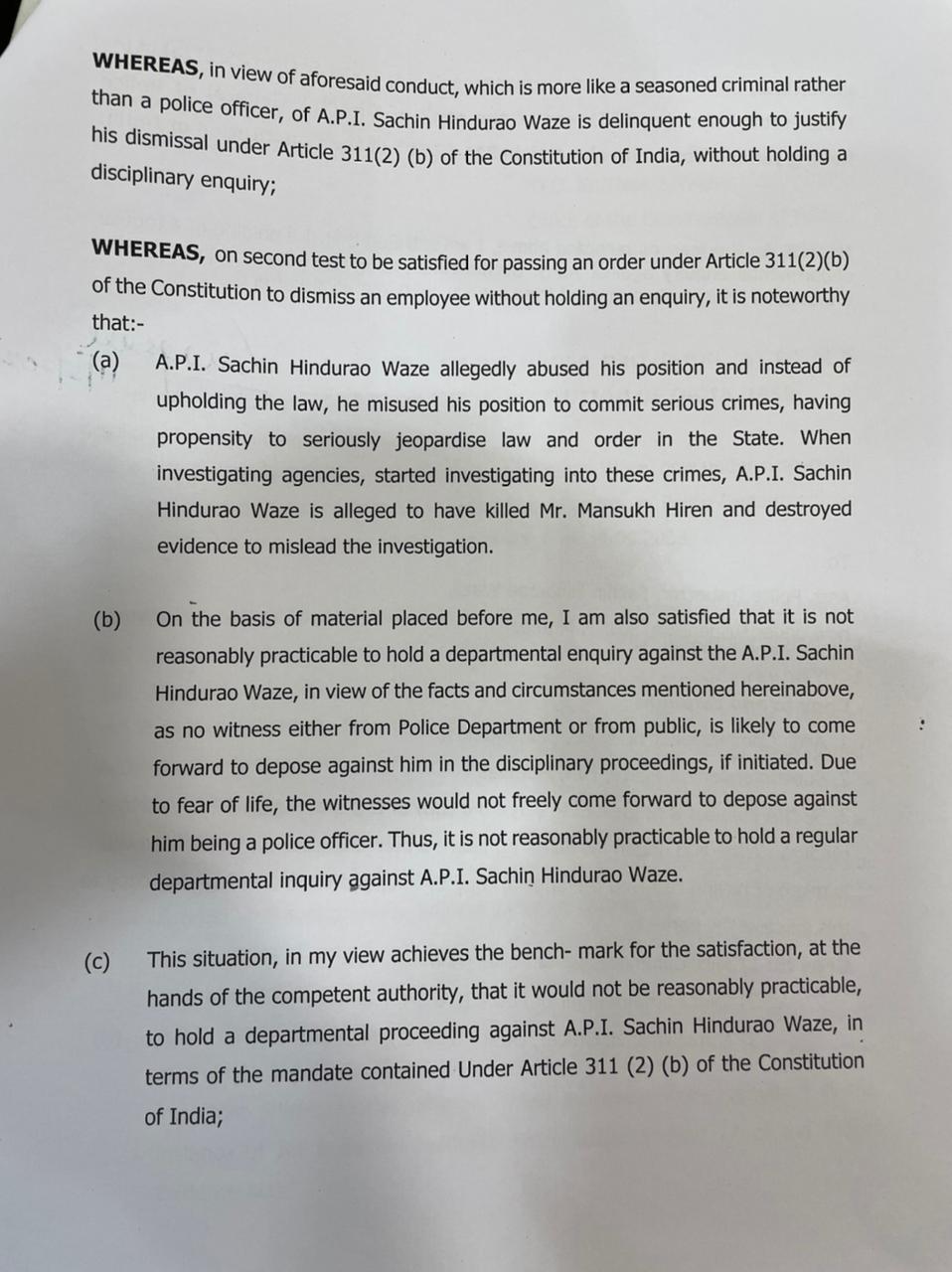 Along with his aide & suspended API Riyaz Kazi, Sachin Vaze is being probed in connection with the Mansukh Hiren death case as well. The NIA also secured the custody of Mumbai Police's Crime Branch Inspector Sunil Mane. He was confronted with the alleged confessions made by Kazi and Vaze in their statements to the central agency. As per sources, Mane was present at a meeting between the suspended APIs and was reportedly involved in passing on SIM cards procured from Vaze to other officials who were involved in the case. Sources added that he allegedly pressurised businessman Mansukh Hiren to take the blame for the Antilia bomb scare. NIA was also reportedly probing the 'fake encounter' angle in the Antilia bomb scare case which was alleged to have been initially planned in the Maruti Eeco vehicle, which was stolen from Maharashtra's Aurangabad city.