Saint From Jammu Receives Death Threat Call From Pakistan; 'Worried About My Safety'

Saint Sahil Ji Maharaj from Jammu received a threat call from a Pakistani number; it was a video call that threatened him with dire consequences. 
In another attempt by Pakistan-backed forces to create an atmosphere of fear in the Jammu and Kashmir region, death threat calls are being made from Pakistani numbers to Sants (saints) in Jammu. In such an incident, Sant Sahil Ji Maharaj on Thursday received a threat call from a Pakistani number; it was a video call that lasted for 40 seconds in which he was threatened with dire consequences.

It is not the first time that Sahil Ji Maharaj has received threat calls from Pakistan, he received threat calls on August 15, 2020, and on October 07, 2020, and was asked to refrain from speaking against Pakistan. “Several people around you are keeping an eye and will kill you. Our people are around you and this is the last warning,” the caller said.

In his letter to Director General of Jammu Kashmir Police Dilbag Singh, Sahil Ji Maharaj wrote, “I have received a severe life-threatening call from Pakistan on 14/Jan/2022 at 01:20 AM. The incoming number starts with +923015887299. Keeping in mind the scenario which is repeating itself as I have received the same kind of calls earlier which I have already reported, I am completely now worried about my safety now. (sic)”

He further appealed to the police to look into the matter and do the needful at the earliest as this was a matter of grave concern about his security. “Hoping for a quick solution to this repeating problem by providing me with adequate security,” he wrote 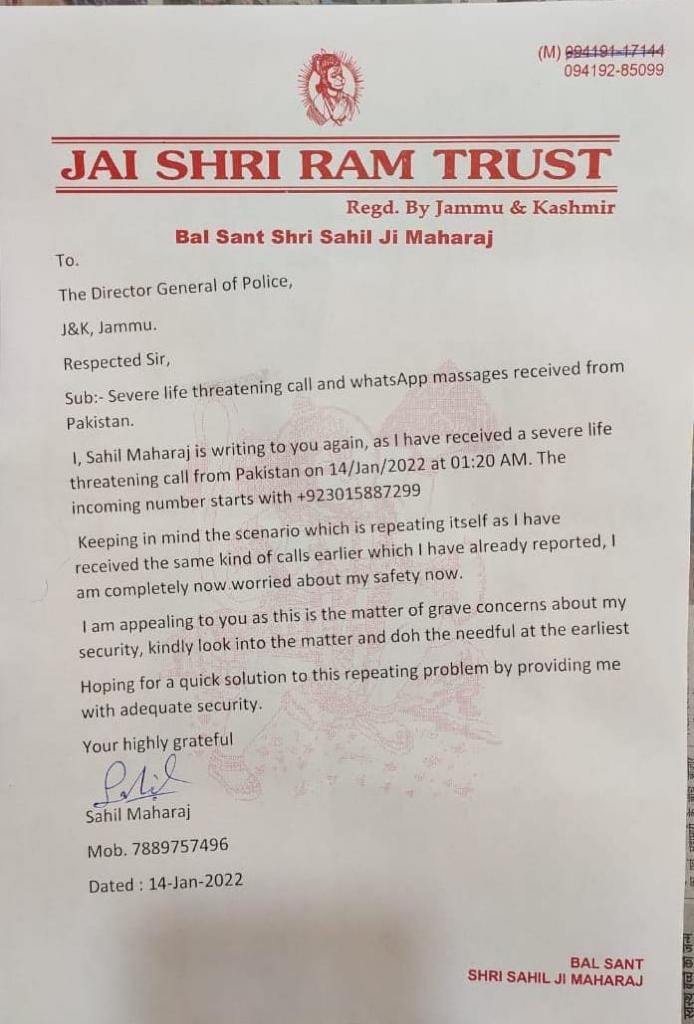