In a big vindication for ex-NCB Mumbai Zonal Director Sameer Wankhede, the Mumbai City District Caste Certificate Scrutiny Committee gave him a clean chit. Ex-Maharashtra Minister and NCP MLA Nawab Malik, Manoj Sansare, Ashok Kamble and Sanjay Kamble had approached the committee alleging that Wankhede forged his caste certificate. In its order on Friday, the panel held that the IRS officer and his father Dnyandev Wankhede belong to Mahar, a designated Scheduled Caste. It also ruled that there is no proof of either of them converting from Hinduism to Islam. The panel added that Wankhede is not Muslim by birth.

Speaking exclusively to Republic TV, Dnyandev Wankhede thanked people for supporting them and lamented an attempt to trap his son. Sameer Wankhede also broke his silence on the ruling stressing that he has complete faith in the judiciary. Maintaining that false allegations were levelled against him, he laid bare the trauma his family went through.

Sameer Wankhede told Republic TV, "In brief, I would just like to share my complete faith in the judiciary, in the system. I will just say Satyamev Jayate. I have been saying this all my life and I will keep on saying that. I would not like to comment more as some of the matters are pending in the High Court and some matters are sub-judice. But just personally I would like to say that when such kind of false and frivolous allegations are put on you for doing your national service, it really pains. And in my line of my duty, if the family undergoes such torture and trauma, neither any son, brother, or husband will like to face it."

#RepublicExclusive | I just want to say 'Satyameva Jayate'. My family and I have gone through a lot of trauma: Sameer Wankhede on clean chit by Caste scrutiny committeehttps://t.co/8KSmYeCUmD pic.twitter.com/prXbSyZGhX

On this occasion, his wife Kranti Redkar Wankhede observed, "I think today is a very important day for us. It is like Dussehra, it is like killing Ravan, it is overcoming evil. It is proving the truth to the world. We had to face the trial and we came out victorious today. I am very proud of that. I am thankful to the Indian judicial system and the Caste Scrutiny Committee. They did a thorough investigation."

She added, "This was not an easy journey for us. We were struggling every day. We had people who were supporting us in public. You get eyes from some people who are doubting you. These doubts have been put for no reason. Just because a person is serving the nation correctly, doing his duty, is non-corrupt and doesn't take any money, you are framing him, putting allegations on him and spoiling his name."

#RepublicExclusive | This wasn't an easy journey for us. Some people tried to malign Sameer for personal revenge. I am thankful to news channels like Republic who stood by us in our fight: Sameer Wankhede's wife Kranti Redkar https://t.co/8KSmYeCUmD pic.twitter.com/hF3gFb3tlD

Here is a copy of the order: 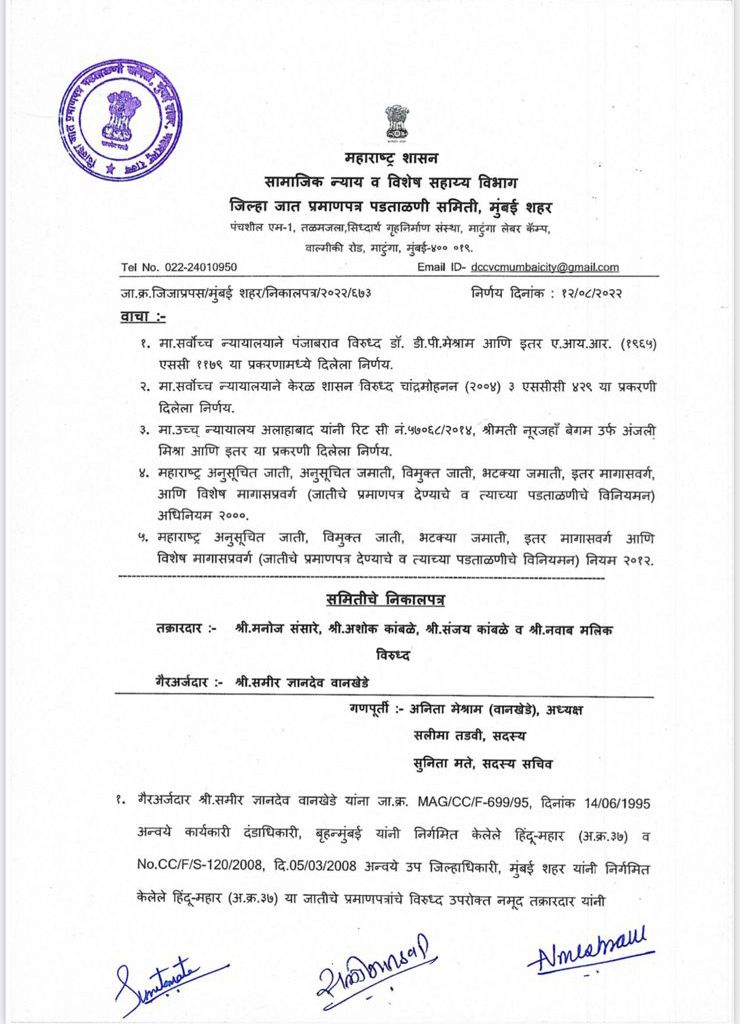 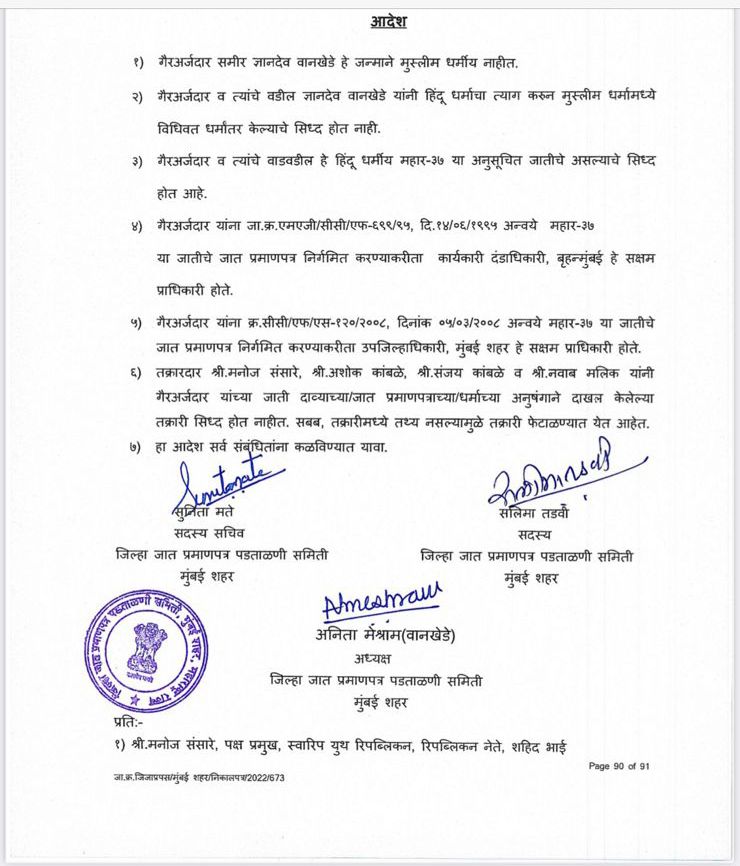 On October 25, 2021, Nawab Malik alleged that Sameer Wankhede corrected his father's name and used a fake caste certificate to become an Indian Revenue Service officer via the reserved category snatching away the rights of genuine Dalits. He stated that several Dalit organizations would formally challenge the validity of Wankhede's caste certificate and asserted that the latter faces a jail term of 2-7 years if found guilty. Clarifying that he harbours no ill-will against the NCB, he claimed that Wankhede registers "fake cases"  in order to extort money from people.

Moreover, he alleged that Wankhede is tapping phones via two private persons. The then Maharashtra Minister also stated that he had received a letter sent by an unnamed official of the NCB who cited instances of 26 "fake cases" allegedly registered by Wankhede. After his NCB stint ended on December 31, 2021, he was shifted to the Directorate of Revenue Intelligence. Within a span of 6 months, he was transferred to the Directorate General of Taxpayer Services, Chennai.