Even as Prime Minister Narendra Modi snubbed Pakistan at the ongoing Shanghai Cooperation Organisation (SCO) summit by not greeting him, Pakistan Prime Minister Imran Khan on Thursday reiterated the need to resolve all outstanding issues with India through dialogue. He said that talk is the only way to sort out differences, amid spiraling tensions between the two neighbouring countries.

Khan, who is also in Bishkek for the two-day SCO Summit, told Radio Pakistan in an interview that there is no way the two countries should think of resolving issues through military means. He reiterated that both New Delhi and Islamabad should come to the negotiating table to resolve the Kashmir issue.

Responding to a question on whether Pakistan is seeking international mediation in improving bilateral ties with India, Khan said that Islamabad is looking for mediation as it believes that "progress comes with peace and tensions with neighbours detract from resources that can be spent on human beings."

This comes after PM Narendra Modi avoided shaking hands at an informal dinner hosted by Kyrgyzstan President Sooronbay Jeenbekov for the SCO leaders. Moreover, in another attempt to shield terror organisations based in Pakistan, the country reportedly used Al Umar Mujahideen's name as a fig leaf for a terror attack in Anantnag perpetrated by LeT, that martyred 5 CRPF Jawans in South Kashmir

While Khan is attending the SCO summit for the first time after assuming office last year, this is PM Modi's first visit to a multilateral forum after being re-elected for a second term.

Tensions between India and Pakistan strained further following the deadly February 14 Pulwama terror attack. New Delhi has remained rooted in its stand, saying that terror and talks with Islamabad cannot go together.

India had already clarified that there would be no bilateral meeting between the two leaders. This comes despite the Pakistan Prime Minister writing a letter to Modi recently, saying Islamabad wants dialogue with New Delhi to resolve all outstanding issues between the two countries. Moreover, Modi's chartered plane did not take the Pakistani air space for flying to Bishkek and instead flew via the circuitous route through Oman and Iran.

In the picture from the cultural event below indicates how India's shunned Pakistan through the entire event. Leaders of the neighbouring countries, PM Modi and the Pakistan PM are seen sitting at a distance apart from each other in the picture below. 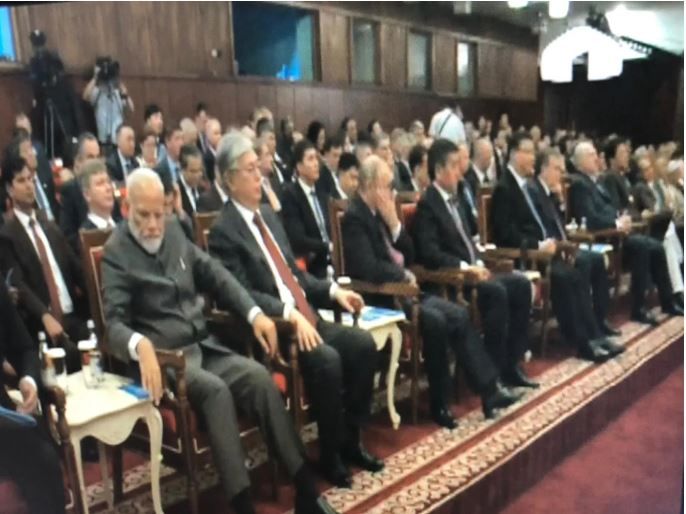 In a video released by Imran Khan's political party Pakistan Tehreek-e-Insaf (PTI) of the opening ceremony of the Shanghai Cooperation Organization (SCO) Summit in Bishkek Kyrgyzstan, as the World leaders could be seen entering the hall one after the other, the Prime Minister of Pakistan unceremoniously ambled in and brazenly took his seat while the entire hall was still standing to applaud for the various heads of state.

Putting the reputation of Pakistan at stake, further, in visuals it could be seen that Imran Khan looks around, then stands up, then yet again sits down comfortably while the World Leaders are still entering the hall.

Prime Minister of #Pakistan @ImranKhanPTI's Arrival with other World Leaders at Invitation of President of Kyrgyzstan for Opening Ceremony 19th Meeting of the Council of the Heads of State of the Shanghai Cooperation Organization in Bishkek Kyrgyzstan (13.06.19)#SCOSummit2019 pic.twitter.com/fYdKYN3Fv7

Republic TV sources have confirmed the neighbour's complicity in the Anantnag terror attack on Wednesday. While, Al Umar Mujahideen, a small terror outfit based in Pakistan occupied Kashmir claimed responsibility for the terror attack, the agencies contradicting the claim have suspected the role of  Lashkar-e-Taiba (LeT) in the attack.

In another attempt to shield terror organisations based in Pakistan, the country reportedly used Al Umar Mujahideen's name as a fig leaf for a terror attack perpetrated by LeT, that martyred 5 CRPF Jawans in South Kashmir.

WATCH: "Because you are at the border, our kids are safe at home": Chinar Corps Jawans hailed at Eid Milan event in Kashmir

Founded by 26/11 mastermind and UN-designated terrorist Hafiz Saeed, Lashkar-e-Taiba was founded in 1987 and was funded by Al Qaeda former chief and once, a most wanted man in the world, Osama bin Laden. In December 2018, Saeed openly addressed a rally in Pakistan's Lahore, further threatened to wage a war against India. He stated that war will be fought in Indian 'cities and not on borders'

The Financial Action Task Force (FATF) has notified Pakistan in the 'Grey List' pertaining to their persistent terror funding, including those proscribed in the United Nations including LeT, Jamaat-ud-Dawa (JuD) and Falah-i-Insaniyat.

According to the CRPF statement, the incident occurred at KP Chowk as motorcycle-borne terrorists opened fire with automatic rifles followed by the hurling of grenades on security forces deployed at the location.  The Station House Officer (SHO) was also critically injured, along with the civilian who sustained foot injuries.

Pakistan became a subject of discussion in the brief bilateral talks held between Prime Minister Modi and China President's  Xi Jinping on the sidelines of the SCO Sumit in Kyrgyzstan's Bishkek on Thursday.  In a press brief by Foreign Secy Vijay Gokhale following the bilateral talk between the neighbours, Foreign Secy informed that India put forth its position pertaining to Pakistan, and told the Chinese President that there is a need for Pakistan to create an atmosphere 'free to terrorism' fortifying its stand that 'talks and terrorism' don't go parallel.

Gokhale said, "The Prime Minister did inform Xi Jinping that Pakistan needs to create an atmosphere free of terrorism and at this stage we did not see that happening yet and therefore we expect Pakistan to take concrete action on the issues that India has proposed."