Several protesters present near Bastara toll plaza around 15 km from Karnal claimed to have witnessed 8-10 people sustain injuries in the police action. 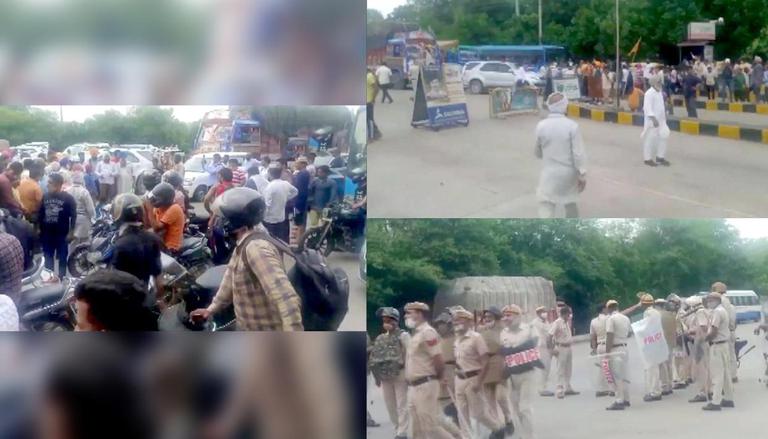 
Around ten people have been injured on Saturday as the Haryana Police allegedly lathi-charged a group of farmers who were disrupting traffic movement on the highway while heading towards Karnal to protest against a BJP meeting. This meeting was attended by Haryana Chief Minister Manohar Lal Khattar, state BJP president OM Prakash Dhankar and other senior leaders of the party.

Following this incident, the Haryana Police has drawn severe criticism for the action against the farmers. According to PTI, several roads were blocked at different places in protest. The affected routes included the Fatehabad-Chandigarh, Gohana-Panipat and the Jind-Patiala highways; and the Ambala-Chandigarh and the Hisar-Chandigarh national highways.

The use of force by the police invited severe criticism from various political parties. Slamming the Haryana government, BKU chief Rakesh Tikait said that all roads would be booked till 5 pm in the state to protest the baton charge in Karnal. Informing that the police has lathi-charged the farmers thrice, he said it is harassment on the farmers if they are being lathi-charged for protesting peacefully.

Reacting to this incident, Haryana Bhartiya Kisan Union (Chaduni) chief Gurnam Singh Chaduni alleged that the police had brutally lathi-charged the protesting farmers. Many were left injured, he added.

READ | Maharashtra: Farmers dump tomatoes on roads as prices drop to Rs 2-3 per kg in Nashik

Strongly condemning the police action, Chaduni said, "Many farmers were injured after police brutally lathi-charged them without any provocation. Some even could be seen with blood all over their clothes."

Strongly condemning the action of Haryana Police, Congress leader Randeep Singh Surjewala took to his Twitter handle and said that Haryana CM rained lathis over the state's soul and the coming generation will remember the blood of farmers, which has been spilt on the roads.

Calling the lathi-charge a conspiracy of Haryana CM and Deputy CM to kill farmers in Karnal, Surjewala said that BJP-JJP is a "General Dyer" government. First Modi-Khattar governments killed agriculture with three black laws, Now the BJP-JJP government is shedding the blood of farmers, he added.

Congress leader Deepender S Hooda said that the duty magistrate in Karnal had given direct orders to the police that whoever passes through there, his head has to be beheaded. Asserting that the BJP-JJP government has crossed all limits of cruelty, the Congress leader asked, "Can a government behave like this with its own countrymen?"

Hitting out at the Haryana Police, Tamil Nadu Congress Committee called the saffron party "coward and shameless". Stating that CM Khattar-led government wants to scare farmers on the force of blood-water, it said that the Haryana state government wants to break the courage. "But those, who have Bhagat Singh in their heart and Gandhi in their mind will not be afraid of BJP handcuffs," it added.

Coward BJP, shameless BJP.
Haryana's Khattar government wants to scare farmers on the force of blood-waste; wants to break the courage.
But those who have Bhagat Singh on their chest and Gandhi in their mind will not be afraid of BJP handcuffs.#FarmersProtest pic.twitter.com/8B9mwVdxjZ

Several protesters present at the site near the Bastara toll plaza around 15 km from Karnal claimed to have witnessed 8-10 people sustain injuries in the police action. The police, however, said only mild force was used as the protesters were blocking the highway, affecting traffic movement.

Farmers protesting the central farm laws have been opposing public functions of the BJP-JJP combine in Haryana. Several farmers had gathered at the Bastara toll plaza near Karnal, responding to a call given by the BKU. Citing section 144 of the CrPC imposed in the area banning assembly of five or more people, the police made several announcements over loudspeakers, declaring the gathering by the protesters "unlawful".

Initially, they asked the farmers to disperse, but resorted to force as the protesters refused to budge. The police said the protesters were bent on moving towards the venue of the BJP meeting in Karnal. All roads leading to the venue had been heavily barricaded. Yogendra Yadav said that as part of their ongoing agitation against the farm laws, the farmers had decided to hold a peaceful protest against BJP leaders, for which they had assembled at the Bastara toll plaza.