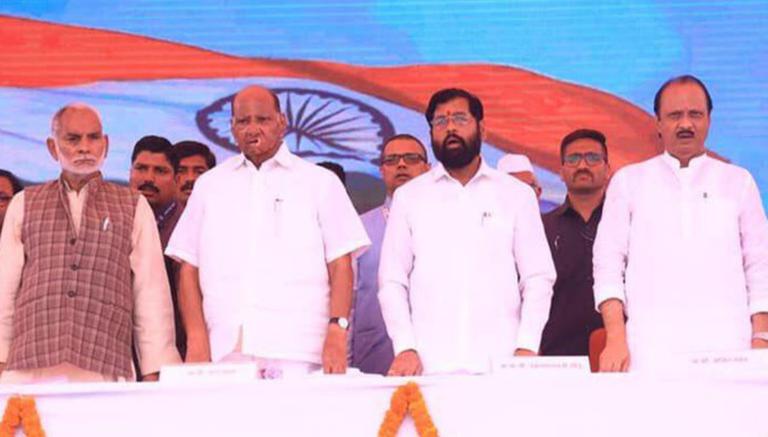 Sharad Pawar had invited Maharashtra CM to the Vasantdada Sugar Institute (VSI) annual meeting in Pune on Saturday. While addressing the event at VSI, CM Eknath Shinde heaped praises on Pawar saying, "Sharad Pawar is an experienced leader who held several responsibilities at the state and national level. His contribution is huge and cannot be ignored." Notably, along with CM Shinde and Sharad Pawar, the Leader of the Opposition in the Maharashtra Assembly, Ajit Pawar, and several other NCP leaders, including Jayant Patil, were also on the dais.

With farmers and businessmen connected to the sugarcane industry in the audience, the Chief Minister said, “We regularly receive guidance from Pawar Saheb and his contribution to the nation and the state cannot be ignored. He always guides us for the benefit of the common people of the state, irrespective of who is in power.”

"I seek his advice and guidance. He often calls me up and gives his suggestions on various issues pertaining to the state and its people. His contribution to the corporate sector is also invaluable," CM Shinde added.

'At Davos, many showed interest in investing in Maharashtra': CM Shinde

CM Shinde also interacted with media personnel after the event and said that during his visit to Davos to attend World Economic Forum (WEF), any MoUs were signed after investors voiced confidence in the state's infrastructure.

"After reaching Davos, we could sense the immense enthusiasm of investors when it comes to investing in our country and the state. Many MOUs were signed after investors voiced confidence in our infrastructure," the Maharashtra CM said.

"We didn’t just sign the MoUs, they will be followed up on and implemented. Many heads of state and industry chiefs, too, showed an interest in investing in our state," he added.