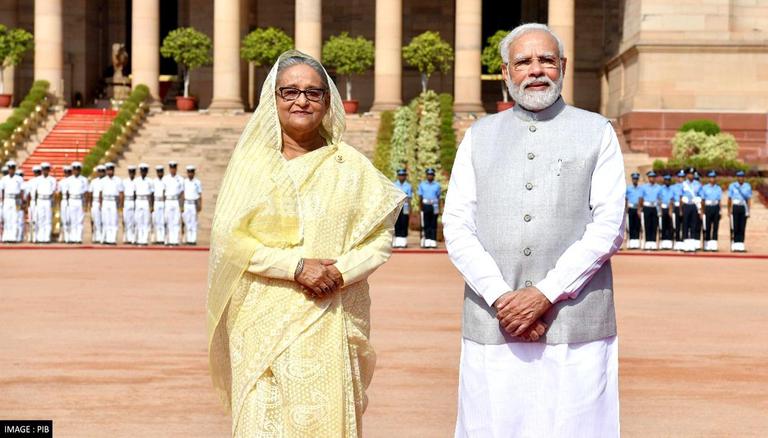 
As the Prime Minister of the People’s Republic of Bangladesh, Sheikh Hasina, made a 4-day visit to the neighbouring ally India, the two countries signed a series of Memorandum of understanding (MoU) to bolster cooperation across various sectors including defence, economy, trade and water sharing.

While the Teesta pact was stalled due to the differences between the two neighbouring nations on water sharing of the river with the same name, India's Ministry of Jal Shakti and the Ministry of Water Resources, Bangladesh managed to sign an MoU for the interim water sharing for the Kushiyara river.

During the talks with PM Sheikh Hasina, we discussed ways to further boost connectivity, ramp up our trade partnership and enhance cooperation in sectors like IT, energy and more. We will also work together to tackle the menace of climate change. pic.twitter.com/B3b4MppbbR

Both India and Bangladesh share about 54 rivers and the pact on Kushyari water sharing is the first ever reached since the two sides signed the Ganga water treaty in 1996. The Teesta water sharing agreement has been hanging with no conclusive outcome for more than a decade due to opposition from West Bengal Chief Minister Mamata Banerjee, who stands in the way of implementation of a mutual deal.

The 414 km long river lies 150 km in Sikkim, 123 km in West Bengal and 140 km in Bangladesh. While Bangladesh PM affirmed that both New Delhi and Dhaka have managed to find a peaceful resolution to the longstanding pending water issues with the bilateral cooperation of PM Modi, defiant West Bengal Chief Minister has refused to shift her posture to find a common ground with Dhaka on water sharing of Teesta.

"I recall that the two countries have resolved many issues in the spirit of friendship and cooperation. We hope that all outstanding issues, including Teesta water sharing agreement, will be concluded as an early date," Hasina said at a joint press conference at Hyderabad House.

Bangladesh and India struck a preliminary pact in 1983 agreeing to share an estimated 39 per cent of water flowing to the Indian side and close to 36 per cent flowing into Bangladesh's stream of the river body. Another interim arrangement was signed in 2011 that permitted India to use 42.5 per cent water and Bangladesh 37.5 per cent from the Teesta for over 15 years. The West Bengal CM Banerjee, who was a part of former Indian Prime Minister Manmohan Singh’s delegation to Dhaka, snubbed the deal.

The water hiatus, though, concluded Tuesday as water-sharing MoUs were signed by upper riparian and lower riparian states that will bring relief to the southern Assamese population in India and the people of the Sylhet division of Bangladesh.

Earlier today, I had excellent discussions with PM Sheikh Hasina in New Delhi. Bangladesh is a major trade and development partner of India. We cherish the people-to-people linkages between our nations. During our talks we reviewed the full range of bilateral relations. pic.twitter.com/MYDEEcHtGK

India on Tuesday unveiled the project to construct Unit I of the Maitree power plant, a 1320 (660x2) MW supercritical coal-fired thermal power plant which will be operational in Rampal, Khulna, Bangladesh. The project will be implemented as Indian Development Assistance and is estimated to cost USD 2 billion with USD 1.6 billion to the government of Bangladesh, It will be funded under the Concessional Financing Scheme (CFS). New Delhi inaugurated 5.13 km long Rupsha rail bridge.

The passage stretches 64.7 km from Khulna-Mongla Port and is a single-track broad gauge rail project. For the first time, the bridge will connect the Mongla Port with Khulna by rail, and thereafter to Central and North Bangladesh and also with the Indian border at Petrapole and Gede in West Bengal.

The GoI agreed to supply an estimated 25 packages of road construction equipment and machinery to Bangladesh's Road and Highways Department. It also agreed to upgrade the Khulna Darshana railway line's broad gauge infrastructure that links Gede-Darshana to Khulna, thereby augmenting the rail connections between the two countries.

It is an honour to have met Hon PM of Bangladesh Sheikh Hasina in Delhi. Her vision for Bangladesh is inspirational and stunningly bold.

We are committed to commissioning our 1600 MW Godda Power Project and dedicated transmission line to Bangladesh by Bijoy Dibosh, 16 Dec 2022. pic.twitter.com/LySohNBSrV

The USD 312.48 million or Rs 31.24 crore project will eventually link the rail route to the Sea Port of Mongla in Khulna Division, Bangladesh. In order to enhance bilateral rail connectivity, the GoI agreed on the extension of the Parbatipur Kaunia railway line to link Birol in Bangladesh with Radhikapur in West Bengal under the estimated USD 120.41 million or Rs 12 crore project.