After the Taliban gained control of Kabul, concluding a week-long battle, the Shiv Sena has requested the safe return of Indians stuck in Afghanistan 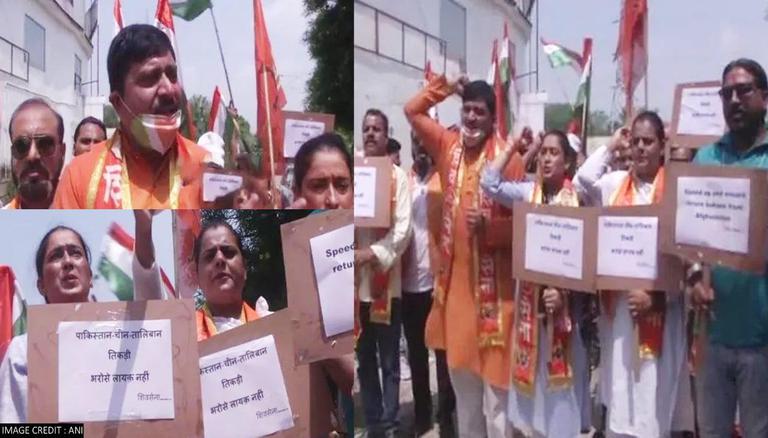 
After the Taliban gained control of Kabul, concluding a week-long battle and resulting in the fall of the democratically elected government, the Shiv Sena has requested the safe return of Indians stuck in Afghanistan. The Shiv Sena's Jammu and Kashmir unit staged a rally on Thursday, August 19, demanding the return of Indians stranded in the war-torn country. "Bring our brothers back" and "Bring Indians back" were their rallying cries.

Manish Sahani, the chief of the Shiv Sena's Jammu & Kashmir unit, remarked, "We appeal to Prime Minister Narendra Modi to ensure the safe return of Indians from the Taliban-led Afghanistan. We are getting the information that, 200 Indians are stranded in Gurudwara Sahib in Kabul province of Afghanistan. We urge the government to bring them all back."

He added, "The vigilance should be increased at the international borders of India and Pakistan, as there is a high probability of drug smuggling through the borders. The triple alliance of Pakistan, China and Taliban should not be trusted."

Around 180 passengers, including India's envoy to Afghanistan and all other diplomats, have already been evacuated by the Indian Air Force. Prime Minister Narendra Modi presided over a Cabinet Committee on Security (CCS) meeting on Tuesday and directed all concerned officials to take all necessary steps to secure the safe evacuation of Indian nationals from Afghanistan in the coming days.

The Ministry of External Affairs (MEA) had previously advised Indian citizens in Afghanistan to contact the Special Afghanistan Cell to organise repatriation and other requests from the war-torn country. The MEA has already stated that the government is dedicated to the safe repatriation of all Indian people from Afghanistan and that flying arrangements will be put in place once Kabul airport is open to commercial operations.

The Indian Air Force (IAF) had previously flown a special flight, the C-17 Globemaster, from the Hindon Air Force Station in Ghaziabad, Uttar Pradesh, on Monday, August 16. The aircraft was sent to aid stranded Indians, including embassy staff and their families. The flight had to be rerouted to Tajikistan due to the volatile situation in Kabul. It flew to the Hindon air force base in Jamnagar at 11:20 a.m. on Tuesday, August 17, after landing at Kabul to evacuate people.