Republic Media Network on Tuesday broke a sensational exclusive story entailing never-before-seen papers that detail Congress president Rahul Gandhi's links and dealings with persons and entities that were at the time of the deals being probed by investigative agencies in connection with some of the biggest scams of the then UPA government. The documents and revelations pose crucial questions.

In the first of a two-part expose, the documents Republic Media Network has accessed reveal that Rahul Gandhi partook in a commercial property transaction with one of the main accused in the notorious 2G spectrum allocation that had rocked the nation when its details and scope had come out. The entity being probed was Sanjay Chandra-led Unitech and the documents reveal not only the initial transactions of Rahul Gandhi but also a string of payments that continued after that.

Sanjay Chandra's Unitech was allegedly one of the biggest beneficiaries of the 2G scam, having been awarded 20 out of 22 Telecom circles by then UPA Telecom Minister A Raja in 2008.

In October 2010, after Supreme Court asked the UPA to reply on a notice regarding 2G and just weeks before the CAG report on 2G was tabled in the Lok Sabha, Rahul Gandhi had signed a deal with Unitech to buy two office units in this Unitech’s ‘Signature Tower 2’ in Gurgaon. Rahul Gandhi had paid Rs 1.44 crore and Rs 5.36 crore for B-007 & B-008 in this plush tower.

As seen in the document below, the current Congress president has signed the deal on October 12, 2010 for the said deal. 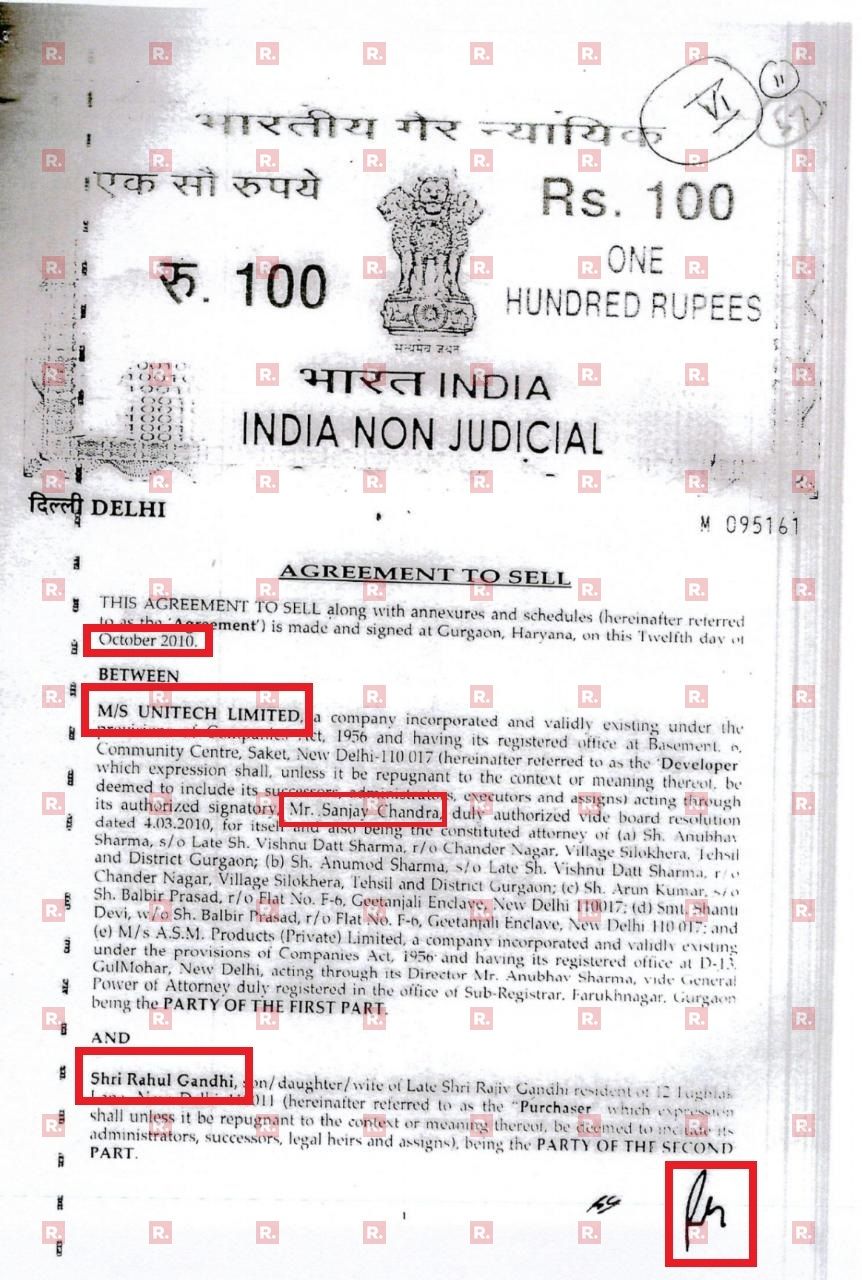 The deal raises pertinent questions about the Congress president's deal with the 2G Scam accused.

#RahulDealWithScamsters | Given the shocking details of the details are now in the public domain, should Rahul Gandhi explain the facts on a one-on-one interview with Arnab Goswami? Fire in your opinion using the hashtag. pic.twitter.com/DQqeoWp7KB

#RahulDealWithScamsters | Should Rahul Gandhi answer question for the sake of propriety? What's your view? Fire in your opinion using the hashtag. pic.twitter.com/qgcCHkqxQD

In paragraph number 4 of the agreement, he allegedly made an advanced payment of Rs 95.27 lakh and Rs 3.54 crore for these two office units.

However, strangely, despite what appears to be a property deal between Rahul Gandhi and Unitech, the Congress president is allegedly paid back Rs.2.92 crore by the company as an interest income which increases dramatically and unevenly every year.

In April 2012, Rahul Gandhi allegedly received Rs. 4.2 lakh per month from Unitech and this amount more than doubles and goes up to Rs. 8.85 lakh per month by September 2014.

See the images of the documents pertaining to the information: 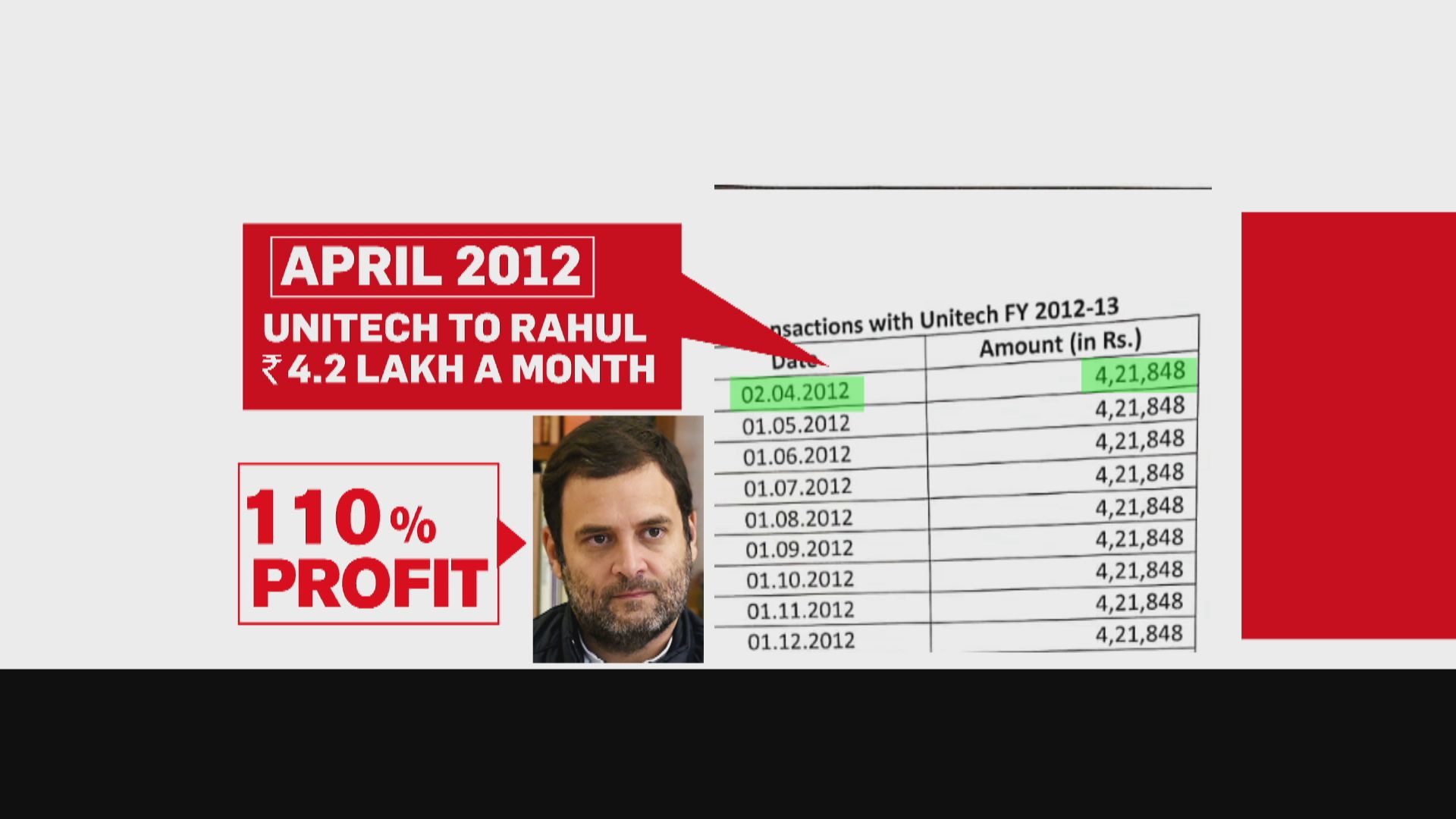 This raises a number of questions:

#RahulDealWithScamsters | Should Rahul Gandhi come clean on the facts and details himself? What's your opinion? Use the hashtag and let us know your views. pic.twitter.com/fXhkEtD0EA

#RahulDealWithScamsters | From property deals to signed documents, from details of 'interest income' to unexplained appreciated amounts from Unitech-- should Rahul Gandhi come on-record explaining his business dealings with the 2G-accused company? What's your view? pic.twitter.com/CXOdgwJYmy

Watch a detailed report in the video above.

Buddhu caught in a deal with Unitech of 2G fame. Now no one can say Namo is not serious about fighting corruption. “First”Parivar Chor hai