The All Parties Sikh coordination committee in Kashmir on Wednesday demanded an inter-caste marriage Act and a strong anti-conversion law be implemented in the Union Territory (UT). The demand from the Sikh committee comes after two women were forcefully converted to Islam in Budgam and Srinagar which led to a massive protest from the Sikh community. In a letter dated June 30, the All Parties Sikh coordination committee (APSCC) chairman Jagmohan Singh Raina sought the implementation of the inter-caste marriages Act in order to 'put an end to such practices' and that it would reportedly safeguard the interests of the people of different faiths and religions.

Noting that members of 'elite political families in J&K' had indulged in inter-caste marriages over the years, the APSCC chairman claimed that he was surprised no one had pointed fingers at them and claimed that the issue was blown out of proportion when it occurred in a normal family. He further called for the implementation of the Anti-conversion law to stop forcible conversion and claimed that it would reduce the friction between two communities. 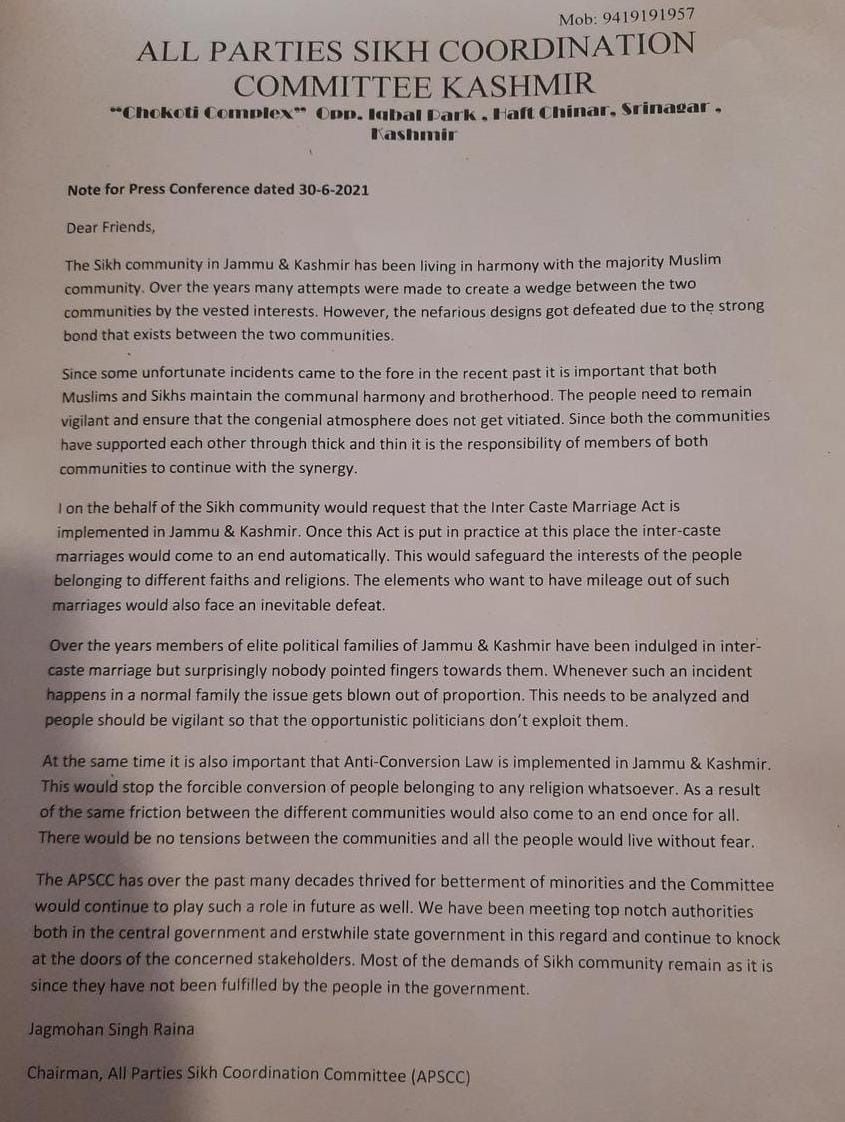 Shiromani Akali Dal (SAD) spokesperson and DSGMC President Manjinder Singh Sirsa on Monday demanded anti-conversion law in Jammu and Kashmir while speaking to the media. Sirsa alleged that the family of one of the abducted girls had to face discrimination as they weren't allowed to enter the court. He also expressed his disappointment over the majority community in J&K for not showing enough support. Sirsa highlighted that the Sikh community was always at the forefront whenever help was needed by the people of Kashmir.

Sirsa said, "We were expecting people from the majority community to come and support us. Unfortunately, they didn’t. During floods in Kashmir, we would come with food every day from Delhi for 50,000 people. When Kashmiri students were being harassed outside, the Sikh community arranged their travel to Valley."

With two Sikh girls allegedly being kidnapped and converted into Islam, Sri Akal Takhat Sahib, the highest temporal seat of Sikhism, had taken a serious view of reports of Sikh girls falling victim to 'love jihad' and had written to Jammu & Kashmir's Lieutenant-Governor Manoj Sinha seeking a law to prevent forceful religious conversions on the pretext of marriages. As per reports, two Sikh girls from Kashmir had been abducted and converted to Islam.