Slight Improvement In Tripura Flood Situation, One Feared Washed Away

Flood situation in Tripura improved marginally on Sunday with no fresh spell of heavy rainfall, even as one person was feared washed away in the gushing waters. 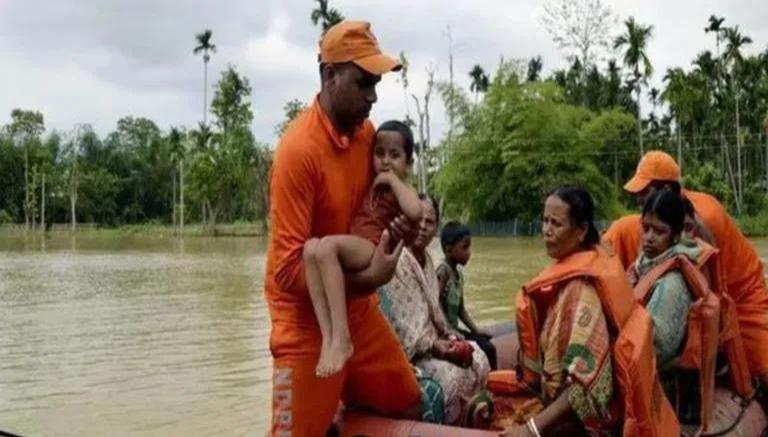 
The flood situation in Tripura improved marginally on Sunday with no fresh spell of heavy rainfall, even as one person was feared washed away in the gushing waters of river Katakhal, an official said.

The water level of river Haora, which had crossed the danger mark of 10.80 metres, inundating low-lying areas of Agartala Municipal Corporation and its neighbourhood on Saturday, is now flowing below the warning limit (9.02 metres), he said.

Meanwhile, a person identified as Siraj Miah of Maylakhola under Sadar sub-division was reportedly washed away in the  overflowing Katakhal river, a tributary of Haora, said the official of the State Disaster Management Authority (SDMA).

His body is yet to be recovered, the official said.

Around 12,000 people have been rendered homeless due to the flash floods caused by Friday's torrential rain in three districts, West Tripura, Unakoti and North Tripura, he said, adding, 45 relief camps have been set up.

In Sadar sub-division alone, over 11,000 people have been forced to take shelter in 42 camps, the SDMA official said.

He, however, said there has been no fresh spell of heavy rainfall since morning, and there is no forecast of downpour by the Met Department during the next 24 hours.

Two NDRF teams are engaged in rescue operations in Sadar sub-division while personnel of the Army, Assam Rifles and CRPF have been put on alert in case of any urgent need, he said.

Chief Minister Manik Saha had held a meeting with senior officials on Saturday to take stock of the flood situation.