A video has gone viral where a man is seen catching a snake and narrowly escapes from getting attacked by the snake - a venomous king cobra. 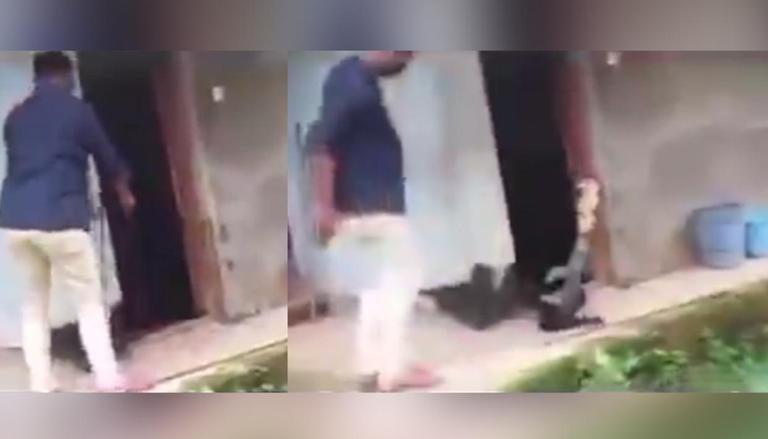 
The sight of a snake sends chills in the spine for many and dealing with this reptile is not easy even for snake catchers and rescuers. The internet is full of many spine-chilling videos where snake catchers can be seen catching the reptile with ease. However, even seasoned snake catchers sometimes have tough times while catching a snake.

Recently, a video has gone viral where a man is seen catching a snake and narrowly escaping an attack by the snake - a king cobra. The video was shared by the Indian Forest Service officer Parveen Kaswan on his Twitter handle. "How not to rescue a snake. Especially if it’s a king cobra," read the caption of the shared video.

How not to rescue a snake. Especially if it’s a king cobra. Via @judedavid21 pic.twitter.com/yDJ5bLevQf

The short video clip shows a man trying to rescue a snake from a bathroom. The clip further shows that a man is trying to pull the long snake out by gripping its tale. However, the very next moment the venomous king cobra is seen retaliating, giving an adrenaline rush to the rescuer who jumps back out of fear. The video has gone viral on social media since it was shared on Tuesday.

The video garnered more than 1.21 lakh views, around 1,500 retweets and over 8,000 likes, all at the time of writing. Besides, it also accumulated a number of comments from people. While many users were stunned to see the video, others found humour in the situation and posted their reactions accordingly. Reacting to the video, one of the users wrote, "The person just got a second life actually." "Who is rescuing whom ??!!!! That Kobra seems to be asking, 'hi what's the matter, may I help you ??!' [sic]," read another comment. "Sir I saw this video earlier. It was absolutely horrific [sic]," expressed another user.

The person just got a second life actually.

Sir I saw this video earlier
It was absolutely horrific

While going for tails, think of head atleast 🎯

Zookeeper has a narrow escape

In a similar kind of incident recently, California-based zookeeper Jay Brewer shared a video of his interactions, where he narrowly escaped a snake attack. The video shared on Instagram shows the zookeeper standing close to a grey python placed on top of a table and within moments, the snake was seen attacking him.

Brewer was, however, able to dodge the attack by the huge python. Sharing the video, he wrote, "This big pied girl isn’t the nicest snake and then try helping her with her eggs [sic]." His social media page is filled with snippets of himself dealing with dangerous reptiles with effortlessness and professional ease.

READ | Comedy Wildlife Photo Awards 2021: Are you the laughing snake or the 'angry bird'?