SC turns down the TMC plea seeking to postpone the Tripura local body elections alleging acts of violence and intimidation by BJP goons. 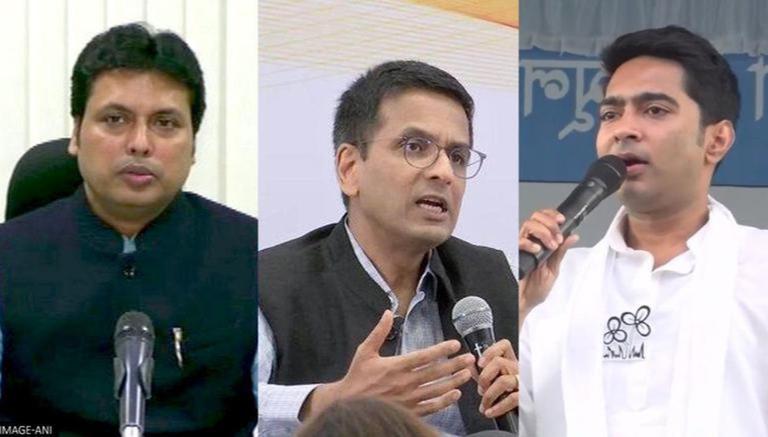 
In a key development, the Supreme Court on Tuesday turned down the Trinamool Congress plea seeking to postpone the Tripura local body elections alleging acts of violence and intimidations by BJP goons. Hearing the plea, the single-judge bench of Justice Chandrachudh asserted that postponing elections, as was being demanded by TMC, was 'an extreme step', and instead resorted to issuing direction to the BJP-led government to ensure that the remaining phases take place in a 'peaceful and orderly manner'.

Further, the Supreme Court bench directed the Tripura police to act in an even-handed and non-partisan manner to redress the grievances of AITC that its supporters and candidates were unfairly targetted by the BJP.

"..we are equally of the view that it is the duty of the DGP, IGP and Home Secretary to assuage any misgivings about the fairness of the law enforcement machinery in supporting the electoral process. The law enforcement agencies must discharge their duty in an even-handed and non-partisan manner to obviate the grievances that the candidates and supporters of AITC are unfairly targeted by contesting political groups", Justice Chandrachudh said.

SC directs DGP and IGP to hold a meeting

The Supreme Court bench also asked the DGP and the IGP (Law and Order Tripura) to hold a joint meeting with the State Election Commission by tomorrow morning for the purpose of assessing the availability of sufficient strength of paramilitary forces drawn from CRPF for ensuring the peaceful conduct of elections. After the assessment, Justice Chandrachudh said that if required, the requisition shall be submitted to CRPF or MHA, and the same shall be dealt with expeditiously in order to maintain peace in the state of Tripura.

Justice Chandrachudh added, "The position as it stands at present is that 3 battalions of CRPF are deployed in the state for field duty. 17 companies comprising of 78 sections have been drafted for election duty. 12 more sections are to be drafted. This indicates that out of the 3 battalions of the CRPF deployed in the state, near 2 battalion strength is being deployed for the elections."

SC warns Tripura govt of action if steps not implemented

Moreover, The Supreme Court bench also asked the Tripura Government to file a compliance report by November 25. Justice Chandrachudh said that it should also include tabulated data on complaints made, steps taken if FIRS are registered.

Having said that, he warned the Tripura government, saying 'if steps given aren't implemented, the Court would be obliviated to take steps."

Ahead of the Municipal elections in Tripura, a series of violent events have been witnessed. TMC has levelled allegations against the ruling BJP of attacking its workers.