Fed up with the "harassment" by the Kerala government, NGO HRDS India terminated the employment of Kerala gold smuggling accused Swapna Suresh on Tuesday. 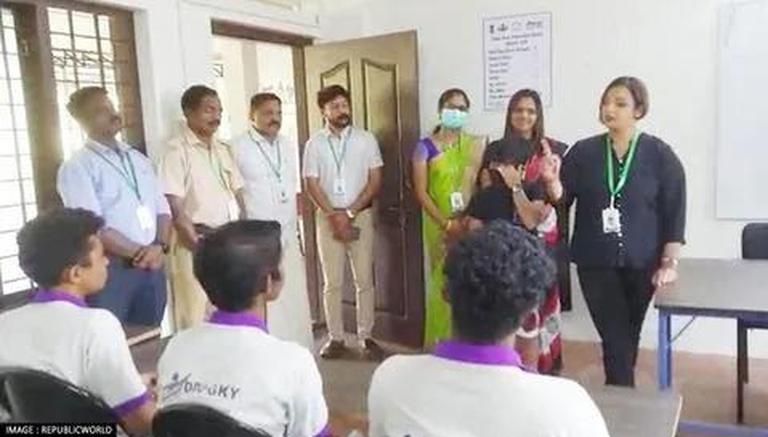 
Fed up with the "harassment" by the Kerala government, HRDS India terminated the employment of Kerala gold smuggling accused Swapna Suresh on Tuesday. Suresh joined this NGO on February 18 in the capacity of Director- Women Empowerment and CSR (Corporate Social Responsibility). This organization is perceived to be backed by RSS as its vice president KG Venugopal is associated with RSS and its project director contested an election as an NDA candidate from Idukki. In a letter addressed to Suresh, the NGO's founder-secretary Ajit Krishnan levelled serious charges against the state government.

NGO's founder Ajit Krishnan noted, "As we promised, we tried our level best to protect you. But we are forced to terminate you with immediate effect. The Kerala government is completely against us by all means. Every HRDS INDIA office in Kerala is haunted by the government by using the Police, Revenue, and various other departments. The only reason behind this is the employment of yours in HRDS INDIA. It was our responsibility to stand by anyone fighting for society and who is deeply involved in the cleansing process against the evil forces."

"At this moment of grief, we remember the remarkable words you said for tribes. 'Hereafter I will dedicate my entire life to the poor vulnerable tribes all over India'. Our sincere apology to you and the society who believed in HRDS INDIA. But we failed to keep our promises in this regard. We aren't able to tolerate the attacks from the Kerala government," he added. Suresh has repeatedly claimed a threat to her life after she alleged the involvement of Kerala CM Pinarayi Vijayan, his wife Kamala, daughter Veena, ex-Minister KT Jaleel, bureaucrats M Sivasankar, Nalini Netto and CM Raveendran in the gold smuggling case. 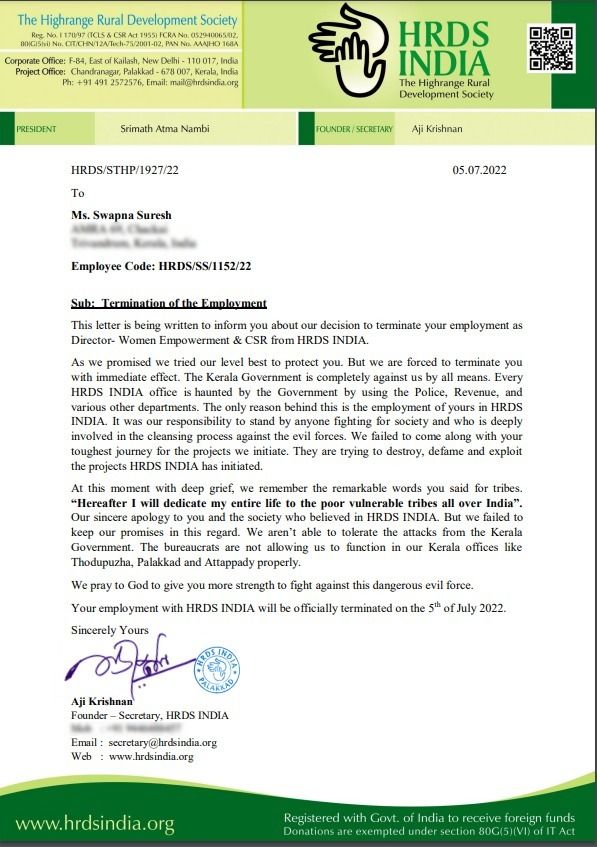 What is the Kerala gold smuggling scam?

On 5 July 2020, Customs officials seized 30 kg of gold worth Rs.15 crore at the Thiruvananthapuram Airport from a diplomatic cargo addressed to a person in the UAE Consulate. Sarith PS, who worked at the UAE Consulate, was apprehended in this regard. Subsequently, Swapna Suresh, an ex-Consulate employee working as the manager of the Kerala State Information Technology Infrastructure Limited and M Sivasankar were also arrested in this case. Suresh was booked and arrested in cases filed by the Customs, ED and the state police.

After securing bail in all cases and getting her detention under the COFEPOSA quashed, she walked free on 6 November 2021. As per the charge sheet, the NIA alleged that the accused persons raised funds and smuggled 167 kg of gold between November 2019 and June 2020 through the import cargo addressed to diplomats at the Consulate General of UAE in Thiruvananthapuram. Furthermore, it added that the main accused had planned to smuggle more gold from countries such as Bahrain, Saudi Arabia and Malaysia.

READ | Kerala: ED issues notice to Shaj Kiran in connection to Swapna Suresh's allegations
READ | Swapna Suresh has 'no fear of arrest' as she appears before crime branch in case by Jaleel
First Published: 6th July, 2022 12:44 IST
SUBSCRIBE TO US