In the letter, the faction has asked PM Modi to extend the facility of 'Development of North-Eastern Region' to Darjeeling Hills, Terai and Dooars.

The Gorkha Janmukti Morcha has once again raised the Gorkhaland pitch, demanding 'constitutional justice' for the people living in Darjeeling, Siliguri, and Kalimpong. In a letter to Prime Minister Narendra Modi, the Binoy Tamang faction has asked the Centre to 'constitutionally safeguard' the people living in the areas. In the letter, the faction has asked PM Modi to extend the facility of DONER (Development of North-Eastern Region) to Darjeeling Hills, Terai, and Dooars for the upliftment of the economically backward region. 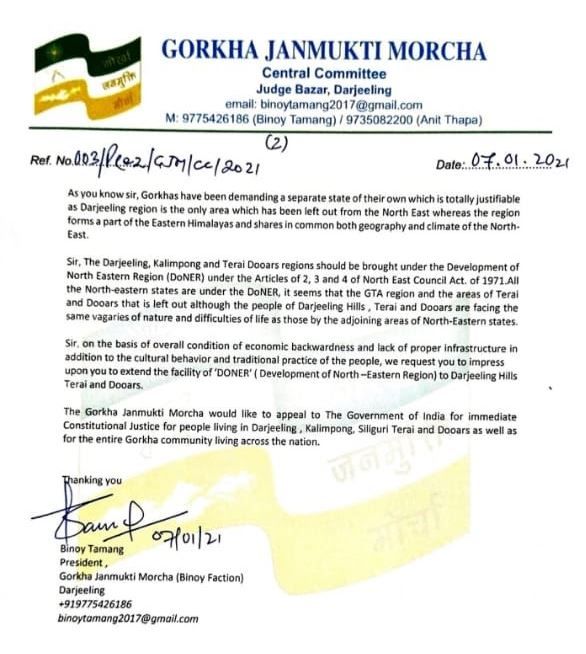 It is important to note that this letter to PM Modi comes days after a delegation of local parties in Darjeeling, including BJP MP Raju Bista met the Centre at the North Block where they discussed the issues of the region including the "re-listing" of 11 Gorkha communities in the Scheduled Tribe category.

MoS G Kishan Reddy and BJP National General Secretary Kailash Vijayvargiya along with senior officials of the Ministry of Home Affairs (MHA) had discussed the political situation in the regions of Darjeeling hills, Terai and Dooars with the Darjeeling MP who called the meeting 'a positive development' for the people of the region especially the Gorkhas.

The Tamang faction of the GJM has recently had a fallout with the TMC-led Mamata Banerjee Government in the state. The faction has reportedly rejected her 'permanent solution' of forming a Gorkhaland Territorial Administration (GTA). The Bimal Gurung faction, on the other hand, flipped last year in October extending their support to Mamata Banerjee after facing 'betrayal by the BJP'.

On the other hand, the Bharatiya Janata Party (BJP) in its 2019 election manifesto had said that it would bring a permanent political solution for the Gorkhas who have been carrying with them, a tag of 'bahari' in the regions. It had also proposed to recognize the 11 left out Indian Gorkha sub-tribes as Schedule Tribes.

Read: Dhankhar Slams Govt Official For Refusing To Give Info On VC Appointment At Darjeeling Varsity