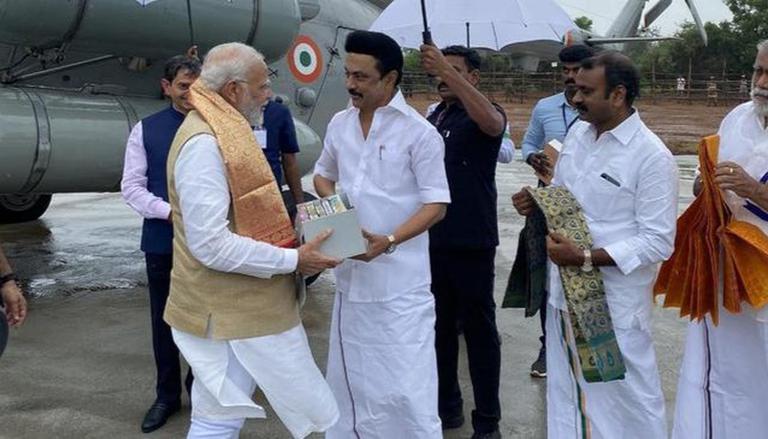 
Prime Minister Narendra Modi landed in Tamil Nadu earlier today, November 11, to attend the 36th convocation ceremony of the Gandhigram Rural Institute (GRI) in Dindigul. At the airport, he was received by Chief Minister MK Stalin who gifted the PM a shawl and the English translation version of the Tamil novel "Ponniyin Selvan".

Ponniyin Selvan is a novel released by Kalki Krishnamurthy in the 1950s and is considered the magnum opus of the author. Originally written in the Tamil language, the novel is a historical fiction based on the events that occurred during the Chola empire. Notably, the book has also been adopted for a movie by filmmaker Mani Ratnam and was released in October this year in theatres and OTT platforms.

At the 36th convocation ceremony of Gandhigram Rural Virtual University, PM Modi awarded degrees to the students and gave a speech on the values of Mahatma Gandhi and their far-reaching impact. "Whether it is about ending conflicts or the climate crisis, Mahatma Gandhi's ideas have the answers to many of today's challenges. As students of the Gandhian way of life, you have a great opportunity to make a big impact," he said during his address.

Gandhigram in Tamil Nadu is a place closely associated with Bapu. The best tribute to him is to work on the ideas close to his heart. One such idea is Khadi. pic.twitter.com/2qXvfvYIUI

Pointing out that Mahatma Gandhi saw khadi as a "tool of self-governance" in villages, he said that this inspired the government to work toward Aatmanirbharta (self-dependence). "Khadi had been neglected for a long time. But through the call of 'from khadi for the nation to khadi for fashion', it has become very popular, and has shown a 300 per cent increase in sales over the last eight years," PM Modi said.