Tamil Nadu Min Lauds CM Stalin For Speech He Made Before PM Modi; 'Proud To Have You...'

After PM Modi's visit to Chennai, Tamil Nadu Minister Ma Subramanian lauded CM Stalin over his speech that the CM made in front of the Prime Minister. 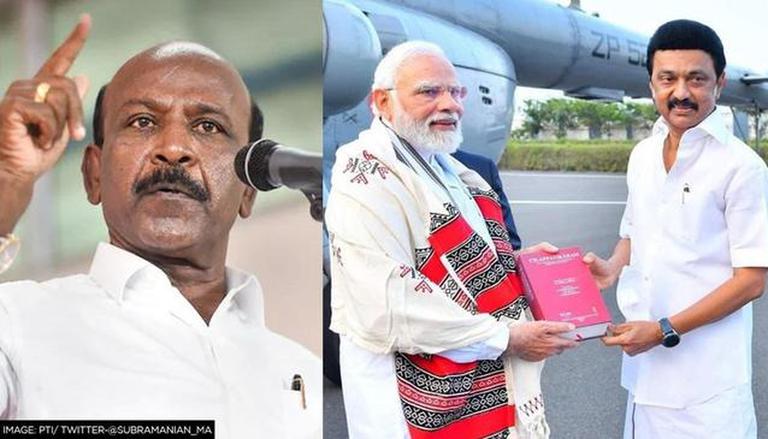 Taking to his Twitter, DMK leader Ma Subramanian on Friday cited an excerpt from CM Stalin's address and stated that the state is proud to have a Chief Minister like him. MK Stalin, while attending an event with PM Modi in Chennai on Thursday, asked for PM's cooperation on several prevailing issues and said, "We will extend a hand of friendship at the same time, raise our voice for a cause." It is this remark that Ma Subramanian cited in his tweet, lauding the Tamil Nadu CM saying, "Tamilnadu is very proud to have you as Cheif Minister."

We will extend hand for friendship,but raise voice for our rights.
Hon’ble M.K.Stalin
Cheif minister of Tamilnadu.
Tamilnadu is very proud to have you as Cheif minister. Ma.Subramanian. pic.twitter.com/OdnZEpO3zR

CM Stalin welcomed the PM Modi on Thursday, as the latter arrived in Chennai in order to lay foundation stones for several developmental projects. While addressing the event, CM Stalin stated that Tamil Nadu is a pioneer in social justice, equality, and women empowerment.

"After the DMK formed the government with the support of the people, this is the first time PM Modi is visiting the state. I welcome Prime Minister Narendra Modi who has come here to inaugurate several projects. Multiple infrastructure projects and three railway projects will be launched by the Prime Minister today. Tamil Nadu is a leading state in terms of economic growth. Our state is a pioneer in social justice and women empowerment also," Stalin said.

MK Stalin also placed a bunch of requests to PM Modi about several issues, appealing for Tamil to be made official in Union government offices and the Madras HC. He also insisted that the southern state has stood against NEET, and hoped that the PM would look into the matter considering its gravity.

"I would like to place some points. I appeal to the PM to recover Katchatheevu as it would offer relief to the fishermen of our state. I also urge for Tamil to be announced as the official language in Union govt offices and Madras HC, just like Hindi. TN has been raising its voice against NEET, I request the PM to look into the matter. I believe the Prime Minister will realise the gravity of this issue. I want you to extend your fullest co-operation and support to Tamil Nadu. We will extend a hand of friendship at the same time, raise our voice for a cause," Stalin said.