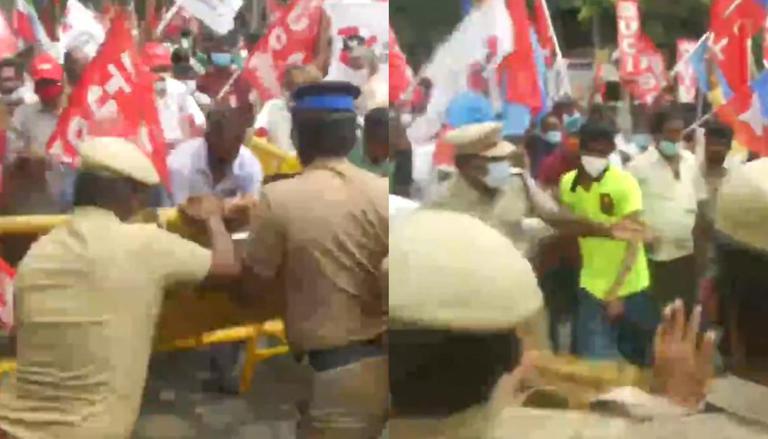 
The farmers’ protest in Chennai took an interesting turn as the protesters agitating against the three enacted farm laws clashed with the state police and broke the police barricade. The incident occurred in the Anna Salai area of Chennai. Several farmers have now been detained by the police as the Bharat Bandh continues in full swing across the country. K Balakrishnan, CPI (M) State Secretary said, “The farmers have been continuously protesting, while the Modi government has been refusing to withdraw the three farm laws. The struggle will only continue and intensify further.”

Protesters from states of Karnataka, Kerala, Tamil Nadu, and Andhra Pradesh were seen backing the Bharat Bandh called by the Samyukt Kisan Morcha (SKM).  In Karnataka, a large crowd gathered in Bangalore's Town Hall area decided to further march towards Mysore Bank Circle. As per on-ground reports by Republic Media Network, daily life was seen functioning normally. One of the protesters informed that they are demanding withdrawal of the three farm laws and the demonstration will go on until laws are not taken back. While in Kerala, roads wore a deserted look as public transport did not function for the nationwide protest. Daily life was affected in Thiruvananthapuram.

READ | Bharat Bandh: Delhi police shuts down traffic movement from UP towards Ghazipur

"Many organizations are supporting our farmers and participating in the nation-wide call for bandh," says protester K Neela pic.twitter.com/QQMyZUcqKH

Farmers have been protesting against the Centre's farm laws for nearly a year at the Delhi's borders - Tikri, Singhu and Ghazipur, demanding a total repeal by Parliament. The protest peaked when farmers broke down barricades, entered Delhi, clashing with police and hoisted the SKM flag at the Red Fort on Republic Day. After the violence witnessed on Republic Day, Delhi police fortified the city borders by cementing nails near barricades, deploying additional troops, adding barbed wires etc blocking access to the roads completely.

While farmers have reiterated 'No Ghar Wapsi till Law Wapsi', the Centre has asked the unions to send its set of demands to amend in the law. The SC-appointed panel has submitted its report to the apex court after holding several rounds of talks with many farmer unions, trade unions, manufacturers, food processing units etc. Talks between Centre and farmers stalled after 13 rounds, before the January 26 violence at Red Fort.