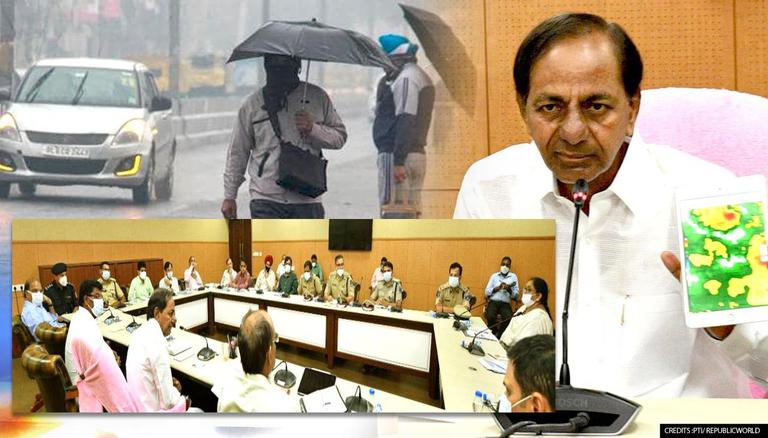 
With the incessant rains in the state of Telangana affecting the normalcy in various areas, Telangana Chief Minister K Chandrashekhar Rao instructed higher officials to be on high alert and ensure that people living in low lying areas do not face any hardships. In the backdrop of heavy rains occurring in the state, along with the upper neighbouring States, and on the measures already taken and to be taken in the Krishna and Godavari river catchment areas, Chief Minister held a high-level review meeting.

With untimely rains, the flood situation is becoming alarming. CM instructed officials of all the departments to take preventive measures as the weather forecast stated that heavy rainfall will occur for the next two days in the state. CM KCR said, “Set up an effective Flood Management Team with seven officers who know how to take safety measures for the people during the floods. Keep the records of the floods every year. Take preventive measures during the floods based on the record of the past floods. The Team should be constituted on a permanent basis”.

The CM explained the awareness that the officers in the team should possess. “In the team, officials having awareness on the measures to be taken one war footing at the time floods should be appointed. One of the members should have awareness on managing the rehabilitation camps. One officer should be given the responsibility to alert Army, Airforce, and NDRF. Another member having the experience to coordinate medical and Health, R&B, Panchayat Raj, should be appointed. Another member should be able to coordinate the GAD, Revenue, Irrigation, and other such departments, which are involved in flood-related works," the CM said, instructing CS Somesh Kumar to immediately constitute the team on a permanent basis.

Chief Minister KCR also spoke to Ministers and Collectors from Nizamabad and Adilabad districts over the phone and instructed them on the safety measures. "There is no need to entertain any fear as the government has initiated all the measures," he said.

He said senior officials should be sent immediately by an Army Helicopter to supervise areas in Kothagudem, Eturu Nagaram, and Mangampet. The CM instructed that NDRF teams should be deputed to Armoor, Nirmal, and Bhainsa areas immediately to take up the evacuation of people in the low-lying areas. "Make arrangements for the shelter, clothes and food for the rehabilitated people," the CM added, outlining that immediate measures should be taken to save people who were stuck in the floods in Adilabad, Mancherial, Asifabad districts.

“There are very heavy rains occurring in the Western Ghats in Maharashtra, Mahabaleshwar recorded the highest 70 cms rainfall. With this, there will be an increase in floods in the Krishna River catchment areas and immediate measures should be taken. Senior officials should be deputed to Nagarjuna Sagar and they should operate from there. He instructed that Nalgonda Irrigation CE should be deputed for the Nagarjuna Sagar dam safety monitoring and Wanaparthy CE for the Jurala project”, said KCR.

Chief Minister also inquired about the Musi river flood. He wanted measures to be taken for the safety of people living in low-lying areas in Hyderabad.