Telangana Minister KT Rama Rao joined the CMs of Kerala, Odisha, Andhra Pradesh and others in urging the Centre to procure COVID vaccines for the states 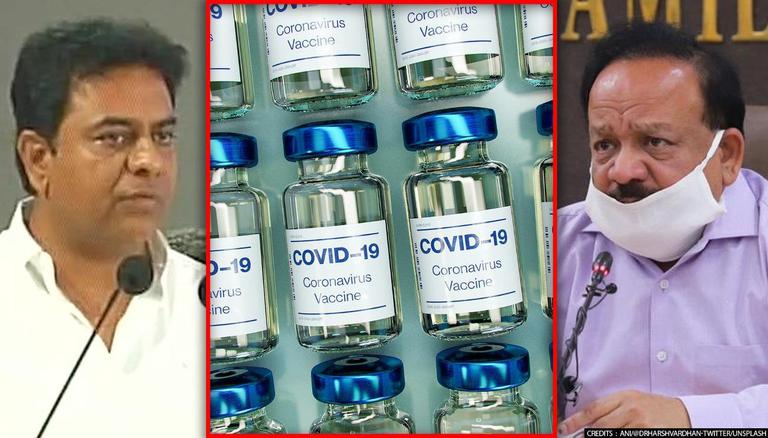 
Telangana Minister KT Rama Rao joined the CMs of Kerala, Odisha, Andhra Pradesh and others in urging the Centre to procure COVID vaccines for the states from global makers as India battles the second wave of the pandemic. After an attempt by the leaders of the various states to procure vaccines individually from manufacturers failed, the CMs have now returned to the consensus, in their own respective ways, that the Centre should procure the doses for them. Telangana IT Minister KT Rama Rao on Friday appealed to the Centre to procure vaccines from 'wherever available' across the globe and demanded a universal vaccination policy to exit the 'crisis situation'.

In a letter addressed to his Kerala counterpart Pinarayi Vijayan on Thursday, Andhra Pradesh CM YS Jagan Mohan Reddy had stressed the need to increase vaccine availability. This had come after his government, which was the first in the country to float a global tender to procure COVID-19 vaccines, failed to elicit any response. Lamenting that the situation is turning into 'states vs Centre', he complained that the inoculation drive is plagued by multiple coordination issues. CM Jagan's own letter had come after Vijayan had written to the non-BJP CMs blaming Centre.

"Any delay in vaccinating the people would come at a heavy price. It is my request that as Chief Ministers, we speak in a single voice and urge the government of India to take charge and responsibility of the vaccination drive, the way it was happening in the early part of the year. The timely vaccination of medical staff yielded great results," Jagan Mohan Reddy stated.

Odisha CM Naveen Patnaik, too, had urged the Centre to centrally procure vaccines and distribute them to the states, citing that inoculation was the only way of offering people the 'hope of survival.' In a letter dated June 2, Odisha CM Naveen Patnaik had urged the Centre to decentralise the vaccination programme's execution and grant flexibility to the states to determine its own mechanism to ensure universal vaccination. Urging various state governments to come together to find a resolution, Odisha CM Naveen Patnaik revealed that he had spoken to the CMs of certain states who held a similar opinion and termed the vaccination drive as the 'biggest challenge' after the Independence struggle.

Incidentally, the Kerala CM too has advocated the Union government should play the main role in vaccine procurement. On May 29, he wrote to 11 non-BJP Chief Ministers calling for a united effort to convince the Centre on universal vaccination. "Statements to the effect that the responsibility to provide vaccine entirely falls within the realm of the States defies the very basis of the cooperative federal system. The need of the hour is a united effort from our side to put forth the genuine demand that the Centre should procure vaccine needed by the States and distribute them free of cost. This will be more cost-effective as well," he added.

What happened to the procurement plans of states?

In their attempt to procure vaccines on their own and to perhaps 'prove a point' to the Centre, various states including Maharashtra, Kerala, Tamil Nadu, Telangana, Karnataka, Odisha, West Bengal and others floated global E-tenders. However, the states made little-to-no progress in their attempts to individually procure vaccines as global makers categorically stated that they would not deal with state governments. Pfizer has noted that its supply agreements are currently with national governments & supra-national organisations, thereby answering the states' call to procure vaccines individually. US vaccine maker Moderna also cited a similar argument after refusing to deal with the Punjab govt. Barring Sputnik, the states have not received a positive response regarding the procurement of COVID-19 vaccines and have since returned to attacking the Centre over this on a daily basis.