The Jammu & Kashmir Police and Indian Army unearthed the hideout during a joint operation, in the Tetharka forest region of Sangaldan in the Gool sub-division. 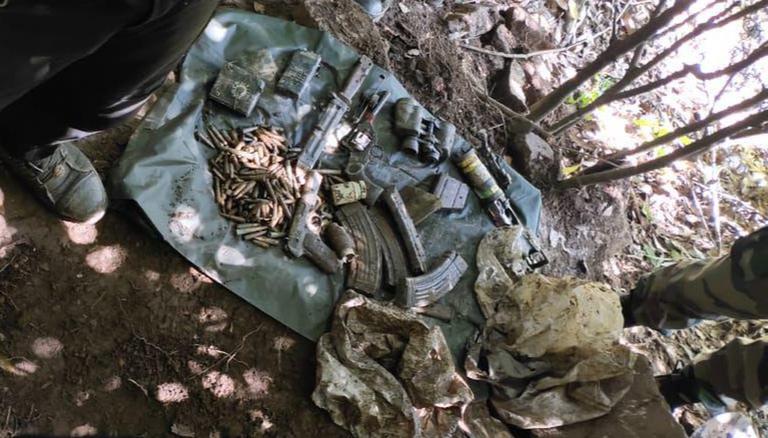 
In a breaking development, a terrorist hideout in the Ramban District of Jammu and Kashmir has been busted and a cache of arms has also been recovered, by the security forces on Sunday, September 18.

The hideout was unearthed during a joint operation of the Jammu and Kashmir Police and the Indian Army, in the Tetharka forest region of Sangaldan in the Gool sub-division, a police official said.

As per sources, one Under Barrel Grenade Launcher, one Chinese pistol with magazine along with 36 rounds, a knife, four AK-47 rifle magazines with 198 AK-47 bullets, 69 rounds of 9mm pistol, one binocular, one camera and one wireless communication device, have also been seized by the security forces during the bust.

Earlier this month, a few hours north of Gool, the Jammu and Kashmir (J&K) police busted a terrorist hideout in the forest area of Syedabad Pastuna, Tral, based on reliable information in a joint operation with the Indian Army's 42 Rashtriya Rifles (RR), and it was later destroyed. Incriminating material was also discovered. In light of this, a case has been filed at the local police station under relevant IPC Sections.

In the operation, the forces found incriminating material of the proscribed banned outfit Jaish-e-Mohammed including materials like edible items, utensils, etc were recovered from the hideout. To investigate further, all the material has been taken into custody. A case had also been filed under the relevant Sections of the law at the Tral police stations and the investigation is underway.

Over 500 terrorists neutralised since 2019

Additional Director General of Police, Kashmir zone, Vijay Kumar, in early August said that the security forces have neutralised over 500 terrorists in Kashmir since 2019, following the abrogation of Article 370. He also stated that the National Investigative Agency (NIA) conducted raids at over 80 locations across Jammu and Kashmir. A number of properties have also been attached, besides conducting raids. In Srinagar, over 10 properties were attached for housing terrorists.