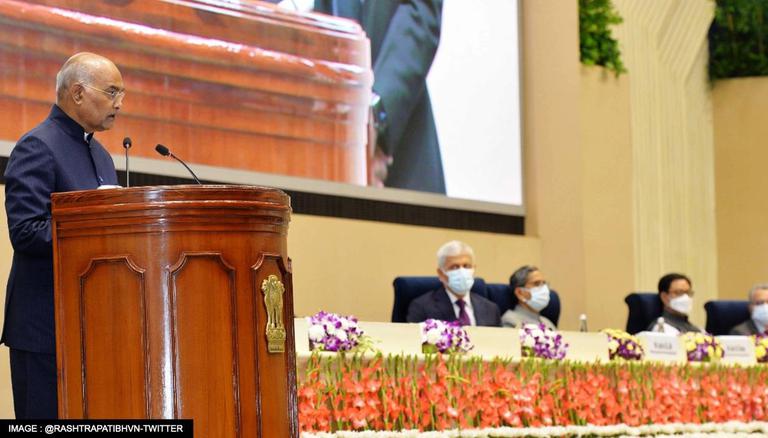 "Our ancient system promotes equal justice to all and is against the Matsya Nyay (The big fish eats the small one)....its time that our aim changes from Women Empowerment to Women-led Development," said President Ram Nath Kovind while addressing an event organised by the National Legal Services Authority (NALSA).

President Kovind while recalling the contribution of Mahatama Gandhi on his 152nd birth anniversary further said that Our freedom struggle was led by many lawyers including the father of the nation.

The President said: After coming back to India after seeing many senior lawyers earning huge amounts, Gandhiji wrote, "The finest legal services shall be available for the poorest at reasonable prices."

President Kovind was speaking while speaking at the launch of the "Pan India Legal Awareness & Outreach Campaign" by NALSA in order to provide legal aid to the last ones in the queue.

The event was also graced by the presence of Chief Justice of India N V Ramana, Law Minister Kiren Rijiju.

Speaking at the event, Law Minister Kiren Rijiju said that lack of legal knowledge is a barrier for people to access legal services.

He also appreciated NALSA for performing an exemplary role in providing justice delivery to the doorsteps to the people.

"Legal redressal is tough for the marginalised especially those living in rural areas as they might have to travel long distance to meet legal representatives. In such a situation, the role of legal aid comes in and NALSA is playing an amazing role. Everyone is coming on time and reaching to maximum people possible," the Law Minister said.

Meanwhile, Chief Justice of India N V Ramana while addressing the gathering said that the outbreak of the COVID-19 pandemic has exposed some deep-rooted problems. "

The topmost judge of the country also thanked the central government for clearing vacancies in the judiciary and said that these appointments will tackle pendency to some extent.  "Since May we have recommended 106 HC judges. Law minister informs that the rest of the names will be cleared in one or two days," said CJI Ramana.

He added that the appointments will take care of pendency. "I seek cooperation from the govt to strengthen democracy," he said.