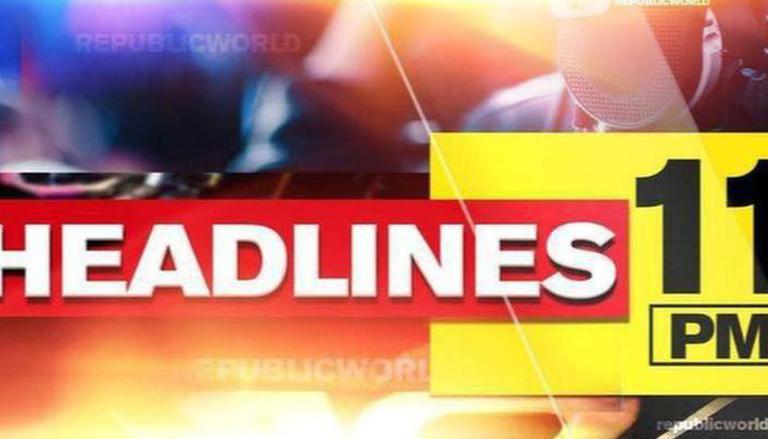 The Union Health Ministry on Tuesday wrote a letter to States and UTs asking them to enhance their field infrastructure and beds in view of the rising cases of COVID-19. In a letter to Health Secretaries of all States and UTs, Additional Secretary Arti Ahuja asked for a review of work for re-establishment and re-commissioning of field and makeshift hospitals, directing states to ensure maximum preparedness against a potential surge in cases.

The Cordelia cruise ship which turned into a COVID-19 hotspot after 66 passengers on board tested positive for the infection, has been sent back to Mumbai as some infected persons reportedly refused to get admitted to Goa hospitals. The ship, carrying over 2,000 passengers, was sent back to Mumbai on Monday night after 27 passengers, who had tested positive, refused to disembark, said Govind Pernulkar, manager at a local ship agent.

2 terrorists of LeT & TRF neutralised in encounter in J&K's Kulgam; 5 killed in 60 hours

Two local terrorists affiliated with Lashkar-e-Taiba (LeT) and the Resistance Front (TRF) were killed in an encounter in south Kashmir’s Kulgam, taking the toll of terrorists to five in the past 60 hours.

Both terrorists were locals and linked to ‘The Resistance Front’ outfit, affiliated to the Lashkar-e-Taiba (LeT). They were involved in several terror crimes,” said Vijay Kumar, Inspector General of Police, Kashmir Zone.

In a major breakthrough in the 'Bull Bai' case, investigative authorities have found an international connection, Republic learnt on Tuesday. As per sources, Shweta Singh, the main accused who was detained from Uttarakhand, earlier in the day, was working with her social media friend, Vishal Kumar - detained from Bengaluru and now put under arrest - for an international syndicate. The apps on the GitHub software, as per sources, was developed abroad by the international syndicate through Microsoft. The intention behind it was to create communal tension, which is why the Punjabi language and Turban were used.

Following the stampede-like situation that took place during a marathon organised by the Congress in Uttar Pradesh's Bareilly, an official inquiry has been ordered by the Bareilly district magistrate (DM) into the incident. The marathon was on the lines of Congress general secretary Priyanka Gandhi Vadra's 'Ladki Hoon Lad Sakti Hoon' campaign for the 2022 Assembly polls in Uttar Pradesh.

The Darul Uloom joined the  All India Muslim Personal Law Board (AIMPLB) in objecting to the Centre's order to organize the 'Surya Namaskar' program in schools as part of the Azadi Ka Amrit Mahotsav celebrations to mark the 75th year of Independence.

Congress leader Milind Deora threw his weight behind the Indian Army over China's Galwan valley propaganda video, saying that despite Beijing’s disinformation campaign, Jawans enjoyed the complete trust of 1.4 billion Indians. Taking to Twitter, the former Lok Sabha MP stated that China's international credibility was already at rock bottom over its refusal to come clean on the origins of COVID-19. Extending his support to the security forces, he said that the Jawans deserved a free hand to counter Chinese aggression.

Lashing out at the Telangana government, Bharatiya Janata Party (BJP) President JP Nadda on Tuesday stated that Chief Minister K Chandrashekar Rao has lost his mental balance following TRS' debacle in the Dubbaka and Huzuraba polls. His statement came after BJP state president Bandi Sanjay Kumar was arrested by police for violation of COVID-19 guidelines after he planned to hold a 'Jagrana' protest in solidarity with teachers and other government employees against the state government's order of introducing a zonal system in the allocation of jobs.

India's premier domestic first-class competition Ranji Trophy will not start as scheduled on January 13 due to a massive surge in COVID-19 cases across the country, the BCCI announced on Tuesday.

The Board of Control for Cricket in India also announced the postponement of the Col C K Nayudu Trophy & Senior Women’s T20 League for the 2021-22 season.

Captain Harpreet Chandi, a 32-year-old British Sikh Army officer finally became the "first woman of colour" to finish an unsupported solo walk across Antarctica to the South Pole on 3 January, Monday.  While announcing the feat, the Captain, who is more popular as Polar Preet, has announced her achievement during a live blog on Monday at the end of Day 40. She has travelled 700 miles, nearly 1,127 kilometres. According to the details shared by the British Sikh Army officer, she was accompanied by a pulk or sledge-- a land vehicle that slides across a surface, usually of ice or snow-- and a kit to battle temperatures of minus 50 degrees Celsius and wind speeds of around 60mph.