On the fourth-floor ward of Quli Qutub Shah building, tree branches were tied with plastic ropes to the hospital beds as saline stands for patients 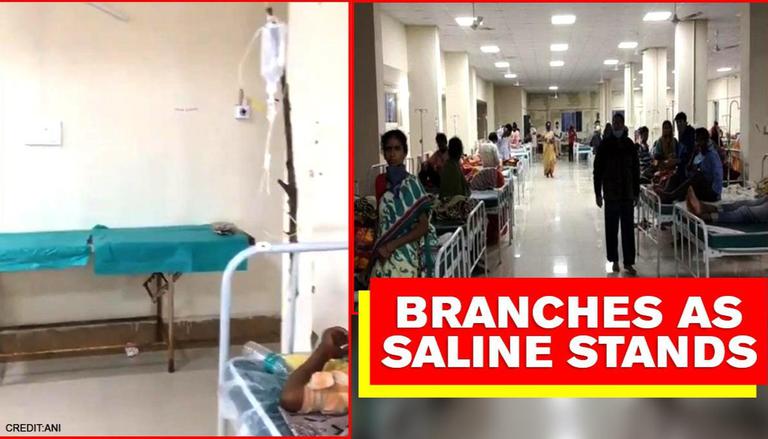 A shocking incident emerged from the Telangana government-run Osmania General Hospital on Saturday, after a video highlighted that tree branches were being used in place of saline stands due to the alleged lack of medical equipment in the state-run hospital.

According to ANI report, on the fourth-floor ward of Quli Qutub Shah building, tree branches were tied with plastic ropes to the hospital beds as saline stands for patients under treatment for COVID. Shortly after the incident came to light, the hospital Superintendent assured that an inquiry will be launched into the matter.

General hospital superintendent, however, has dismissed that the incident was a result of the lack of equipment at the hospital saying that branches were used in place of saline stands since the stands had not been shifted to the new building so far. He assured that the staff has been directed to shift the stands immediately. The new ward has been constructed on a temporary basis for the patients due to flooding in the other parts of the hospital, following heavy rains in the state.

As Telangana continues to reel under incessant rainfall and floods, Chief Minister K Chandrashekhar Rao (KCR) yesterday reviewed the situation and instructed concerned officials to remain on high alert. Karimnagar and Warangal districts have together recorded the highest rainfall and tanks in here are filled to their capacity. Many parts of Khila Warangal district have been flooded after the Chali Vagu stream overflowed following incessant rainfall in the area.

The flood has affected around 500 houses and the low-lying areas around the said districts. More than 1,000 people have been moved to a safer location by rescue operations, and 13 others were rescued from drowning by the Fire Department. All transportation between the towns of Parkal and Bhupalapalli, and Hanamkonda to Mulugu, were halted as rainwater flooded the roads.

Meanwhile, on the pandemic front, as many as 1,102 fresh COVID-19 cases and nine deaths were reported in Telangana on Saturday, taking the tally to 91,361 and the death toll to 693, the state government said.