Tripura Cultural Minister said it was a conspiracy to malign the image of the government and appealed people to maintain peace and not to trust rumours. 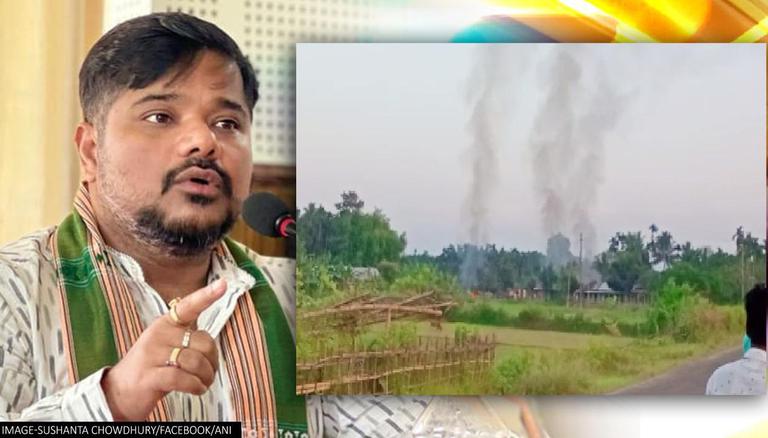 
The BJP-led Tripura government on Friday blamed vested interest groups from outside for hatching a conspiracy to create unrest in the state while maligning its image by uploading a fake photograph of a burning mosque on social media. State Cultural Minister Sushanta Chowdhury said that the police, following a probe into the matter, revealed that no mosque was torched, as opposed to the claim made by various social media posts.

A mosque was vandalised and two shops were gutted in fire at the Chamtilla area in Panisagar subdivision on October 27 during a VHP rally taken out to protest against the recent violence against Hindus in Bangladesh. Three houses and a few shops, reportedly owned by members of the minority community, were also ransacked nearby Rowa Bazar, a senior police official had said earlier, reported PTI.

Tripura Cultural Minister Chowdhury, refuting any such incident said, "There was no such incident of burning of any mosque in Panisagar. Fake news was uploaded on social media to create unrest in Tripura and to disrupt the process of development of all sections of people state."

Chowdhury reaffirmed it was a conspiracy to malign the image of the government and appealed the people to maintain peace and not to trust the rumours.

The Police on Thursday, October 28, tweeted that no mosque was burnt during Tuesday's protest rally and the photograph of the same, where a burning and damaged 'masjid', was fake. The police warned the public not to engage in rumour-mongering and appealed them to maintain law and order.

Tripura Police appeals to all not to spread rumours regarding panisagar incident. Please do not retweet or like the social media post without verification since it amounts to endorsing the view.
Law and Order situation is under control in the state.#Tripura pic.twitter.com/WdOip4fyc1

"Some vested interests are trying to disturb the peaceful communal situation of Tripura," the force said. It had on Wednesday said that all mosques in the state were under the protection of the police. Prohibitory orders under Section 144 of the CrPC were put in the place in Panisagar and neighbouring Dharmanagar sub-divisions following the incident in the Chamtilla area in North Tripura district.

Certain persons by using fake social media IDs are spreading fake news/rumours on Tripura. It is informed that law & order situation in the State is absolutely normal.#Tripura

How did the violence crop up?

The incident followed the alleged vandalism of a mosque and two shops which were set ablaze at the Chamtilla area in North Tripura district on Tuesday evening during a Vishwa Hindu Parishad (VHP) rally. The rally had been taken out by the VHP in protest of the Bangladesh violence against the Hindu community and its temples.

At least 8 people, including 2 Hindu devotees, were killed while several others were injured in multiple cases of communal violence during the Durga Puja festivities in Bangladesh.

However, violence erupted during the VHP rally in Tripura after a group of people allegedly pelted stones and damaged a door of a mosque, following which security forces rushed to the spot and brought the situation under control, district Superintendent of police Bhanu Pada Chakraborty said. A complaint has been lodged in this connection and mosques in sensitive areas have been given protection.

In connection with the Tripura violence, two cases have been registered. One was registered suo moto by the administration while the other was registered based on an FIR filed by some minority organizations demanding action against the perpetrators of the crime.

The Left parties and the Trinamool Congress accused the Bharatiya Janata Party (BJP) of extending support to the right-wing organisations with a motive to gain political mileage in the civic elections that are scheduled to take place next month. However, the BJP has refuted the charges.

As per the report, the BJP has formed a five-member team from the party’s minority cell and asked them to see what led to violence in the state. The 5-member team has also been asked to assess the situation and submit a report in three days.