Upset with the BJP-ruled Centre, ex-Union Minister Uma Bharti on Friday, complained that a power project was being set up affecting Ganga's ecological flow 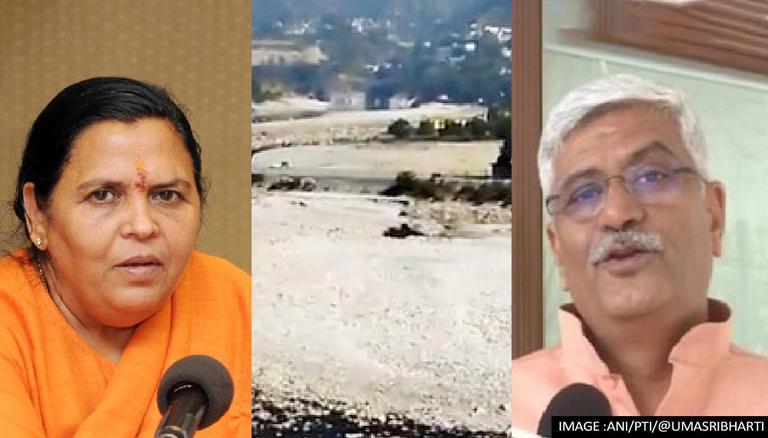 
Upset with the BJP-ruled Centre & Uttarakhand govt, ex-Union Minister Uma Bharti on Friday, complained that a power project was being set up in the state's Srinagar affecting the ecological flow of river Ganga. Taking to Twitter, she shared a photo of the dried-up river, stating that the power plant was a violation of the 2018 notification by the Jal Shakti ministry. Tagging PM Modi, Union minister Gajendra Singh Shekhawat, Uttarakhand CM Pushkar Singh Dhami, Bharti warned that this violation was against the concept of the Ganga rejuvenation project.

She tweeted, "The basic driving force of our Ganga campaign was Mother Dharidevi who was situated on the banks of Alaknanda (Ganga) near Srinagar, located on the way to Badri Kedar. There, with the permission of the state and central government, a private party has tried to set up a power project. The ecological flow of Ganga has been broken which is violation of the 2018 notification by the Ministry of Ganga".

Taking umbrage at the project, she added, "This afternoon, I saw the brazen and ruthless violation of this by a power project in Srinagar itself. There was a part of many kilometers where there was no water. For peak hours of the power project, the water of the entire Ganges was stopped and the river was cut into two pieces. This is a blatant violation of the policy issued after consultation with environmentalists, PM Modi and important ministries of India. I immediately took the video and sending it to authorities for strictest appropriate action."

Previously in February, Bharti had raised ecological concerns when Uttarakhand was flooded by a glacier burst. She said that as a minister she had spoken against having any power project on the Ganga and its major tributaries. Bharti was the Minister of Water Resources, River Development and Ganga rejuvenation during the first term of the Modi government.

"This tragedy that has happened in Rishi Ganga in the Himalayas is a matter of concern as well as a warning. When I was a minister, my ministry in its affidavit about the dams in Uttarakhand in the Himalayas had requested that it is a very sensitive region, and, therefore, power projects should not be built on the Ganges and its main tributaries," she said. She suggested the electricity shortfall caused by that decision could have been met by national grid.