External Affairs Minister Sushma Swaraj will address the UNGA on September 29, with the focus clearly on Pakistan sponsored terrorism

Update at 7:55 PM: India believes that the world is a family: EMA Sushma Swaraj

Update at 7:54 PM: The league of nations was abolished because it was not ready to improve and change we  should not go down the same path. I appeal that measures should be taken to improve: EAM Sushma Swaraj 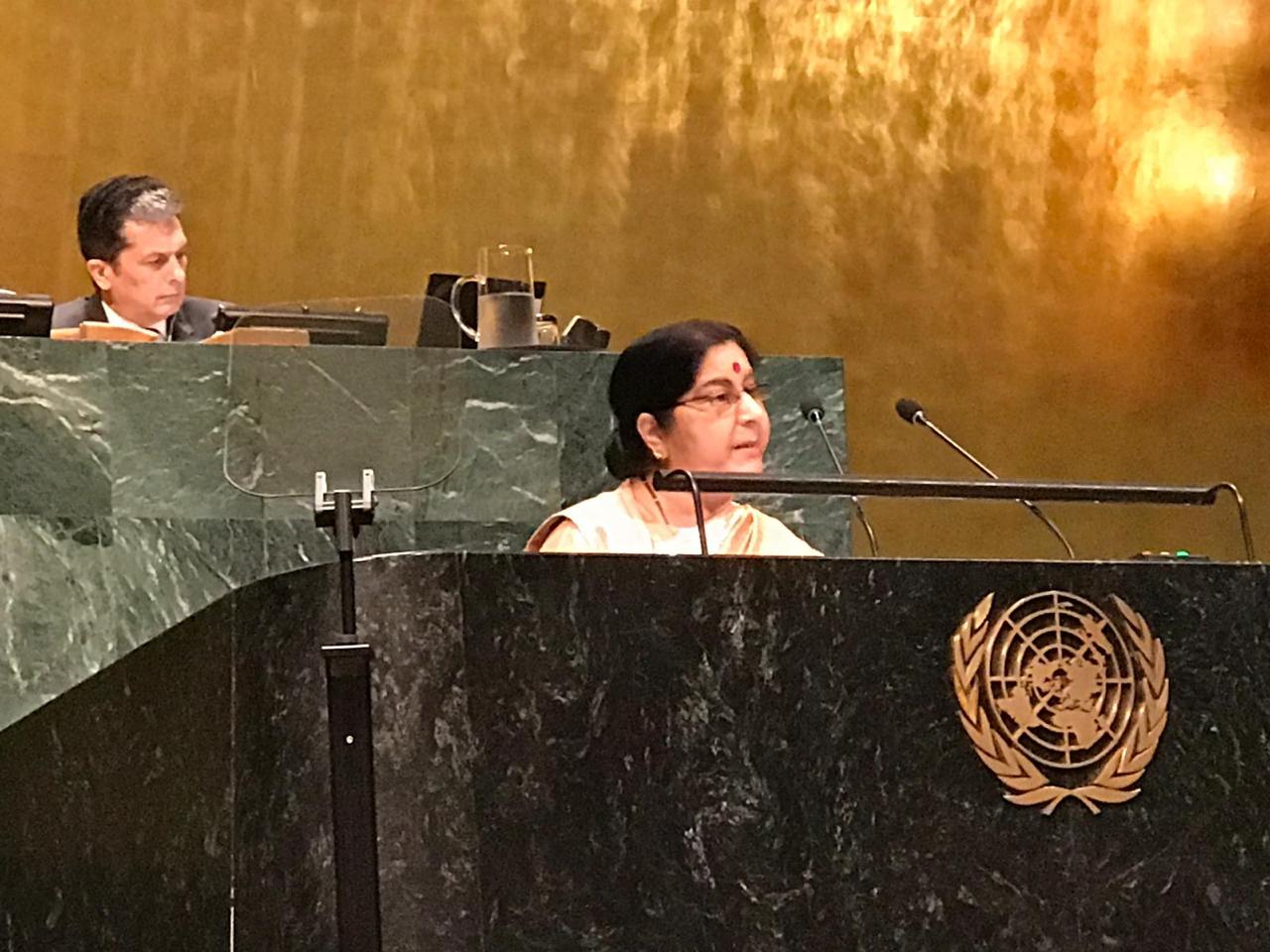 Update at 7:52 PM: Global terrorists called freedom fighters in Pakistan. Stamps being released by Pakistan to praise and support them. How long can we look the other way and remain ignorant? That day isn’t far when the entire world will burn because of terrorism. India appeals to UN to define terror and pass CCIT: EAM Sushma Swaraj

Update at 7:50 PM: Now after the new govt came Imran khan wrote to Modi for talks in New York. We agreed to their invite but hours later we found out that policemen were abducted and killed. Is this an atmosphere for talks or dialogue? Pakistan only cares for killers and is quiet on the victims. Pakistan defends the killers and murderers. They showed wrong pictures and propaganda. For the past 5 years India has been saying that just putting the names out of terrorists is not going to solve anything: EAM Sushma Swaraj

Two weeks after I went to Islamabad for talks, Pathankot base was attacked: Sushma Swaraj at UNGA in New York

Update at 7:49 PM: We are accused of not agreeing for dialogue with Pakistan. This is wrong. This is false. We repeatedly began the dialogue. Every time dialogue has to end because of the hurdles they have put. All the governments have tried to talk to Pakistan. When PM Modi took oath, he called everyone, including Pak PM. I went personally to Pakistan and kicked off dialogue but 3 months back they attacked Pathankot air base: EAM Sushma Swaraj

Update at 7:47 PM: After the end of 20th century it was expected that 21st century will be a peaceful one. 9/11 is considered the biggest terror attack ever, and it was followed by the 26/11. The demon of Terror is rapidly spreading. Terror is not coming from far away but from our neighbors. And this country always denies it. Biggest example of presence of Osama in Pakistan. In US History 9/11 was biggest terror attack. Entire global wanted Osama. US did not know that Osama was being kept safe by Pakistan: EAM Sushma Swaraj

Update at 7:45 PM: All nations must come together to work again climate change. Along with France President Emmanuel Macron, we joined 120 nations to fight climate change: EAM Sushma Swaraj

Update at 7:44 PM: PM Modi has taken a vow for a new India. By 2022 we will achieve a new India. In 2022, INdia will clelebrate 75 years of Independence, at that time it will be a clean India: EAM Sushma Swaraj 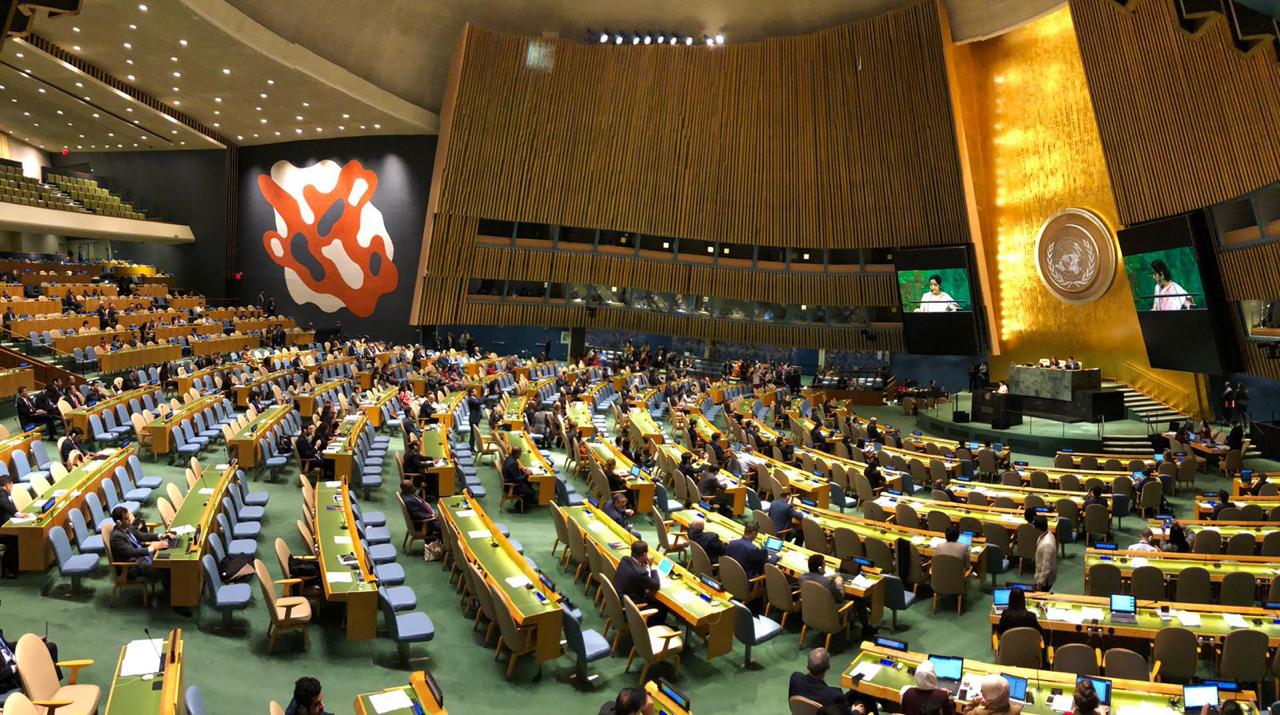 Update at 7:42 PM: Then there is the Mudra yojna. Mudra Yojana ensure jobs for everyone alongside our scheme Awas Yojana for homes. Under Mudra Yojna women are benefiting. We also have 2 schemes to ensure women get help: free gas connections and a maternity scheme. As a woman, you(the chair) can understand how this can change women’s lives ( maternity scheme): EAM Sushma Swaraj

Update at 7:40 PM: We have opened Jan Dhan Accounts. The jan Dhan Yojana ensured people who hadn’t even entered banks were given accounts. Similarly the biggest health scheme in the world Ayushman Bharat was implemented by PM Modi. Ayushman Yojna was launched this month. We have launched Pradahan Mantri Awas Yojna: EAM Sushma Swaraj 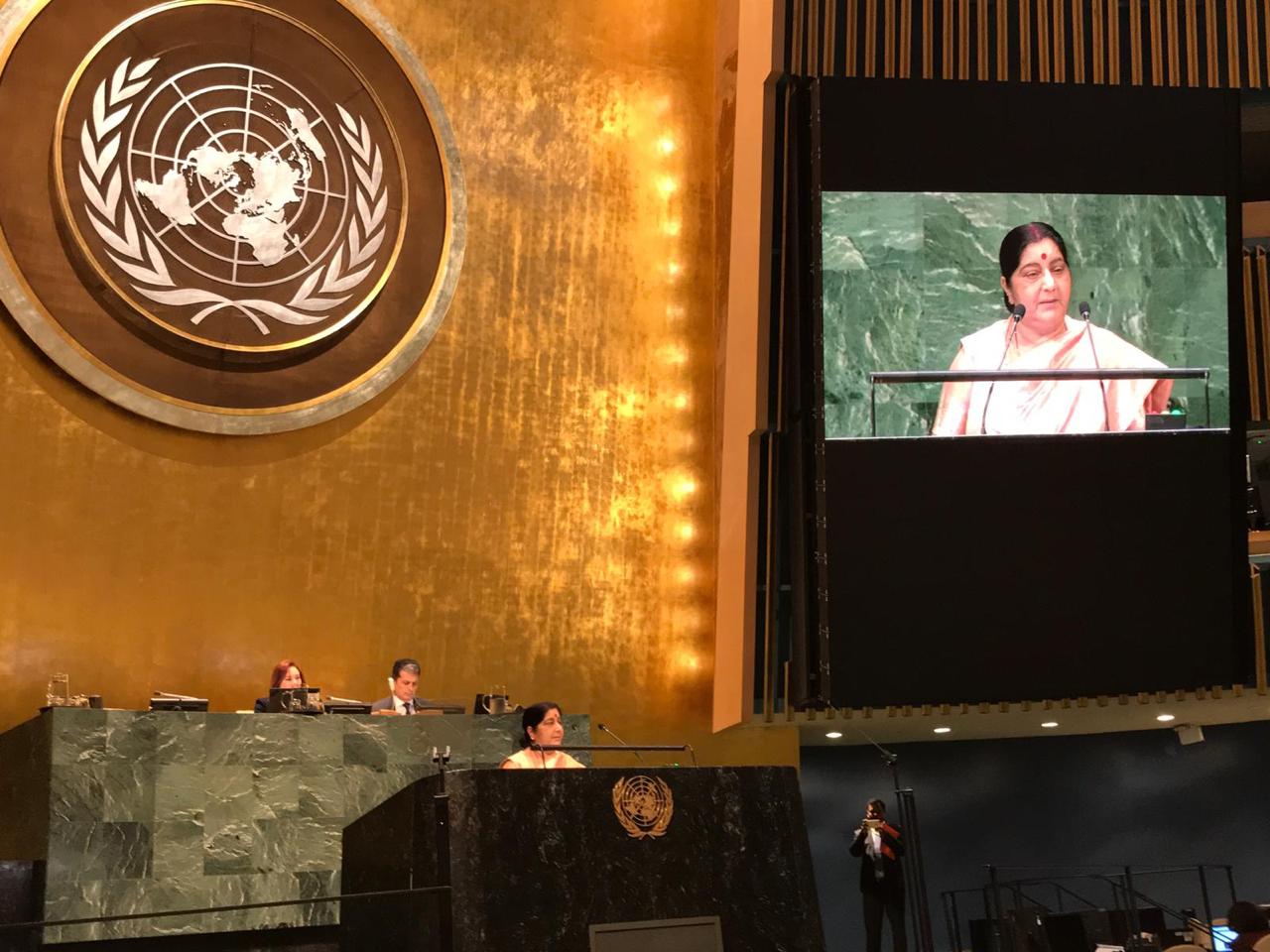 Update at 7:36 PM: Today morning I came to know about the earthquake and tsunami which hit Indonesia, I assure of any help required by Indonesia: EAM Sushma Swaraj

In the past editions of UNGA, India has been open to the idea of having talks with Pakistan, but this time around, following the barbaric acts committed by terrorists in the Indian border, the statement is loud and clear - Stop terrorism, then start talks.

External Affairs Minister Sushma Swaraj will address the UNGA on September 29, with the focus clearly on Pakistan sponsored terrorism. Sources have told Republic TV that she will highlight the recent examples of crimes against humanity in the Jammu and Kashmir while making the stand clear against Pakistan.

The speech is much awaited, given the relations between the two countries have been severely affected by the recent acts of terrorism on the Indian border. In two acts of inhumanity, the terrorists killed a BSF jawan in a barbaric manner, before abducting and murdering three J&K policemen.

It resulted in the Indian government calling off the proposed meet between the two countries at the ongoing UNGA. Prior to the speech by the EMA, Pakistan raked up the Kashmir issue in front of the UN Secretary-General Antonio Guterres.

In 2014, India had said was 'ready to engage Pakistan without shadow of terror, calling for Pakistan to take its responsibility and creating an atmosphere for dialogue. Next year, the idea was similar, but India made it clear that 'terrorism and talks can't go hand in hand, and that if Pakistan wants talks, they have to give up on terrorism'.

Following the terror attacks in Uri and Pathankot to name a few, India took an aggressive stance, and announced that 'we made unprecedented attempts at friendship, but got Pathankot, Uri and Bahadur Ali in return'.