Dharmendra Pradhan inaugurated the North East Research Conclave (NERC) 2022 at IIT Guwahati. The research conclave is being held between May 20 and 22. 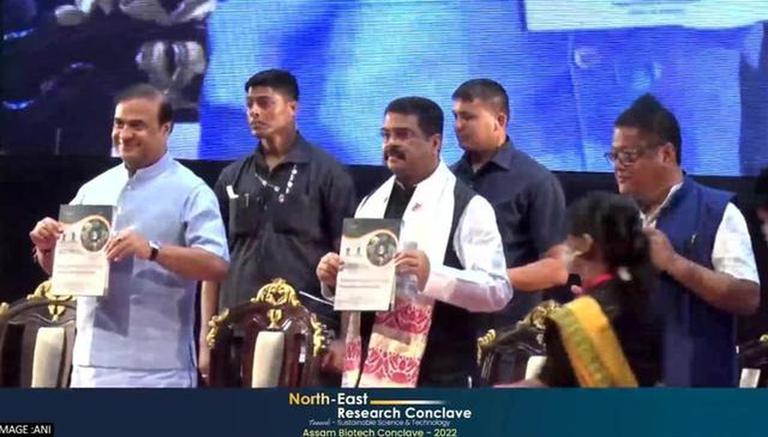 
Union Education Minister Dharmendra Pradhan on Friday inaugurated the North East Research Conclave (NERC) 2022 at the Indian Institute of Technology (IIT) Guwahati along with Assam CM Himanta Biswa Sarma. During his inaugural address at the three-day NERC, Pradhan stated that the conclave will bolster linkages between industry, academia and policymakers and further develop the research, start-up and entrepreneurship ecosystems in the North-Eastern region. The research conclave will conclude on May 22.

The North East Research Conclave (NERC) 2022 is being held jointly with the Science, Technology, and Climate Change Department and the Department of Education, Government of Assam at the IIT Guwahati campus. The conclave is set to host around 5,000 eminent personalities from the North-East as well as other parts of the country. While making the inaugural address at the event, Pradhan avered that the resource-rich North-Eastern region has immense potential to promote research and innovation.

During his inaugural address, Dharmendra Pradhan spoke about the significance of research and stated that the objective of the research should be to find solutions to chronic problems in the country. He added that the NERC 2022 will be a global benchmark for research and development. Pradhan further appealed to the youngsters to take responsibility to take the country to new heights with innovation.

Apart from the Dharmendra Pradhan, C, Himanta Biswa Sarma, Minister of Ports, Shipping and Waterways Sarbananda Sonowal, Minister of State for External Affairs and Education Rajkumar Ranjan Singh, Minister of State for Petroleum and Natural Gas, Labour and Employment Rameswar Teli were also present at the inaugural function. Moreover, several ministers from the Assam cabinet were also present. “The conclave is hosting around 5,000 eminent personalities from the North-East as well as other parts of India. The participants from various sectors such as industry, academia, start-ups, research councils, PSUs, laboratories and technical institutes including schools and colleges,” an IIT Guwahati statement said.

Meanwhile, a Memorandum of Understanding (MoU) ‘Assam Advanced Health Innovation Institute (AAHI)’ was also signed between the Assam government and IIT, Guwahati as part of the inauguration of the conclave. The unique partnership between the state government and IIT Guwahati will look at advanced technologies to transform medical science.